The company that built the “computer in the cloud” from scratch to take the heavy lifting away from our devices, Upthere, has launched their apps into beta, letting in those who signed up for an invite in slowly.

Upthere Home and Upthere Camera for iOS, Android and Mac are now live, and I’ve been playing with them for a better part of the last week. The service is free during the beta period and the company hasn’t revealed any plans for monetization as of yet.

In a blog post today, the team said this about the problem that they’re trying to solve:

This cloud computer takes over the heavy lifting of storing and processing all the stuff we’ve created. It then connects directly to our devices, eliminating the chore of file syncing and ultimately replacing local storage. This cloud computer is more reliable, grows as we create more things, is available anywhere, gets smarter over time, and makes it simple to share with friends and family.

The first of the flagship apps for Upthere, which will allow developers to build on top of it eventually, acts as your dashboard for all of your files. I’m on Mac, so dropping folders and files into it was super simple.

If you’ve signed up and are getting started with Upthere now, or if you’re on the beta list awaiting your invite, I’d suggest grabbing a bunch of folders from Dropbox, other computers and external harddrives that you might have dangling around so that you can start off right. If you forget about that old Documents folder from that work machine from 5 years ago now, you’ll probably forget about it later. Also, remember to attach your iTunes account so you can throw your music onto Upthere.

The Flow screen on Home shows you everything you’ve shared, with a timestamp. This is basically all of the activity happening on your Upthere account. So if you have it installed on your iPhone, Android tablet and desktop, everything’s coming together and you can watch the files slide in. 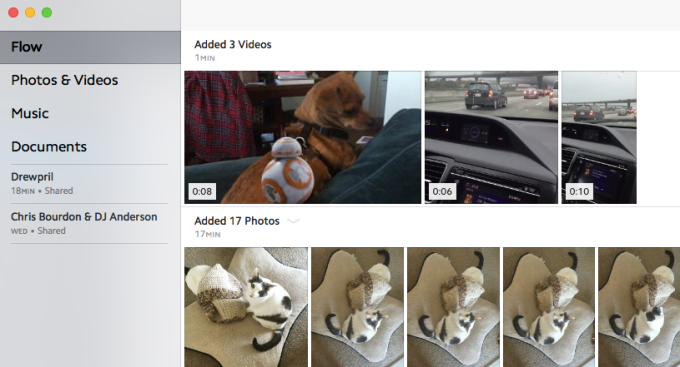 Home for mobile gives you a similar experience, but you treat it differently when you’re on the go. Upthere really shines when you’re out and about because everything in Home is stored in the cloud and not locally…yet still loads ridiculously fast when you tap or preview them. You can listen to your music within the app as well…which admittedly feels like magic. 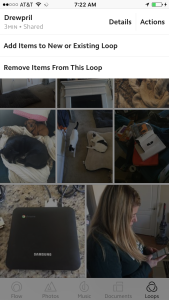 You’ll definitely want to set up what Upthere calls “Loops,” which are basically groups of people you can share things with in realtime. It’s also a way to invite people onto the service. An example of a useful Loop I have is with my fiancee April. I can drop in a few photos, a PDF of our Taylor Swift tickets and a song I just downloaded with her with the flick of the wrist. She’ll get alerted and then can check everything out. The key there is she doesn’t have to sync or download anything. Everything stays on Upthere.

Search looks to need some work, as I hope that there will be more OCR capabilities and facial recognition type features like Google Photos offers. But then again, I can’t upload a song or document to Google Photos…so there’s that.

The Upthere camera takes your shots in realtime and writes them directly to the cloud. You can “create” multiple cameras which are basically groups of people to share things with…that Loops concept from Home. It’ll sync your camera roll or photo library on the devices you install it on if you let it, which is one step closer to having everything in one place.

Snap the shot, boom it’s shared. Notifications go out to the folks in your Loop and they can share photos too. This will be pretty clutch when I get married next month. No need to ask for people to send me their raw files, Dropbox links or use “Download Photo” from Facebook one by one.

To get into the line for beta, you still have to sign up on Upthere’s site. Like I mentioned, while you wait, definitely start pulling all of your files together or you won’t get much use out of the service yet. It’s going to be interesting to watch the company, which has been working on this product for the past few years, slowly build trust with its community, as security will make or break this product:

We secure your stuff in a private place in the cloud, just for you. Keeping your stuff safe and secure is paramount to what we do. We’ve integrated security into every aspect of Upthere, including TLS and two-factor authentication. 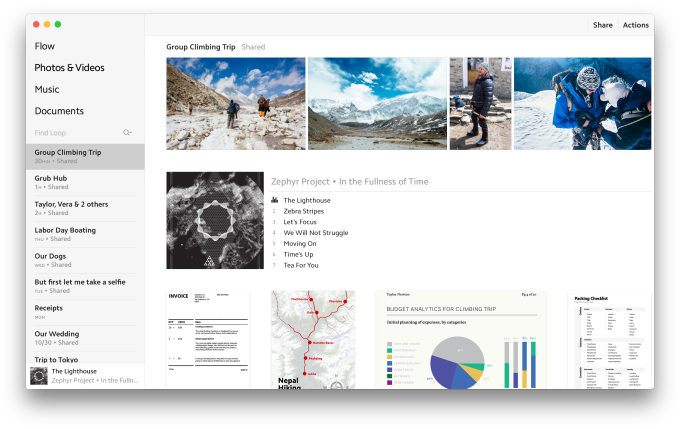 Just don’t think of what you save on Upthere as “backing up,” because things will start getting interesting if you think of it and use it like you use your physical storage.