Today, AngelPad — a five-year-old seed-stage incubator that twice a year chooses roughly a dozen startups to coach over a three-month period — held its ninth “demo day” in San Francisco. As has become routine, its founders presented to a densely packed audience of invite-only guests.

We weren’t surprised, walking onto the crowded scene. At this point, Angelpad, founded by husband-and-wife team Thomas Korte and Carine Magescas, has earned a solid reputation for finding interesting new entrepreneurs. (MoPub and Crittercism are two of its better-known discoveries.)

The outfit — which provides each company with a $55,000 convertible note and an addition $4,000 per founder in exchange for 7 percent of their startup — also seems to be attracting more sophisticated entrepreneurs. That, or else Korte and Magescas are getting better at identifying talent. As Magescas told us, while companies are “usually just getting off the ground here,” Angelpad’s current batch of 13 companies “has an enormous amount of traction already,” to the tune of $2.5 million in combined revenue. “That’s not intentional,” she says. “Some are just [taking off] earlier than we thought.”

Herewith, the companies that presented: 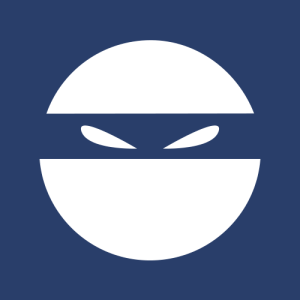 Sync Ninja is a platform-as-a service that enables enterprises to deploy software across data centers and cloud providers with a single command. More specifically,  it enables front-end developers to turn their code into services and run them anywhere.

Its founders include an ex-Google engineer and an former AWS solutions architect who say they’ve basically built their product in the past at both companies. And they’ve convinced at least one well-known customer of their merits: the daily fantasy sports company FanDuel.

Korte is also a fan, telling us he considers Sync Ninja to be the moonshot bet of the group. “If they succeed, they’ll fundamentally transform how people deploy code at a very large scale.” 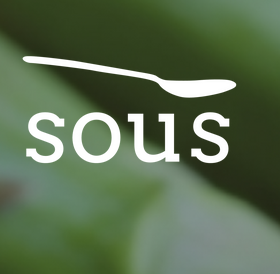 Sous is a mobile-first platform for professional kitchens that aims to help chefs more effectively manage their kitchen, from communicating with line cooks to sharing recipes to more easily purchasing and tracking goods from vendors.

One of Sous’s founders convincingly argued that he understands the issues of chefs well, having worked as one at two Michelin-starred restaurants (Jean-Georges in New York and Uchi in Austin), which he said still rely heavily on clipboards, Post-it notes, and other traditional “tools” of the trade.

Certainly, something seems to be resonating. Since September, the company has begun working with 49 chefs in its initial market of New York. It’s also working with 300 suppliers around the country. 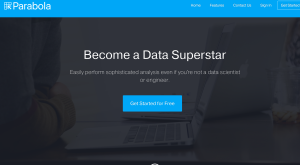 Parabola is a data analytics tool that makes complex ad-hoc analysis easy to create and to consume. So says the company, whose dashboard pulls in data from third party sources and custom data sources in a way that decision-makers can understand, and play with.

Parabola’s founders include a former data consultant from Deloitte Strategy and an ex-Yahoo software engineer, and the duo says the company is already working with 15 companies and 1,000 users, including at Deloitte and the payments company Square. 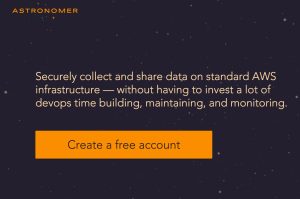 Astronomer is a scalable enterprise platform built for data engineers. The pitch: between data sources and data tools is data management, which is ostensibly a big pain in the you-know-what. According to its founders, data scientists spend 90 percent of their time trying to capture and manage data, a major time sink. Meanwhile, Astronomer makes it so they need only do some light configuring to obtain the data they need on demand.

Customers so far include the Cincinnati International Airport; Crossroads, a church with five locations around the country; and an unnamed national e-commerce company. It doesn’t sound like much, the but the three alone will should produce $100,000 in annual revenue for the company, and it launched just three weeks ago. 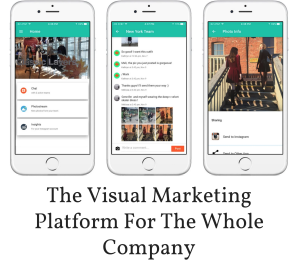 Postmore struck us as very au courant. It’s a visual marketing platform for consumer brands that helps them get more “authentic content” out of their employees — while ensuring those same staffers don’t go too far.

Imagine selfies taken by employees of American Apparel, which happens to be a customer of Postmore. The retailer actually generates 100 unique photos a day, but with that kind of volume, it’s easy to imagine “creative” content going too far. Postmore’s app enables everybody in the company to post and see what’s being posted — including top brass.

OneRooftop is creating concierge services for the small businesses that make up 76 percent of the supply of vacation rentals. The idea: by freeing up time for overworked, small business owners — who tend to handle everything from marketing on Airbnb to guest communications to ground services — OneRooftop can help them optimize their revenue. (One task that the startup takes on, for example, is inquiry management for all of an owners’ listings via email, social, chat and phone.)

There’s apparently still a need for this kind of service. OneRooftop has already worked with 400 properties on the platform and says those properties have seen a 12 percent increase in bookings because of its technology. Its three founders, all MBAs and repeat entrepreneurs, say they have 3,000 more properties set to “go live” in the next 30 days. 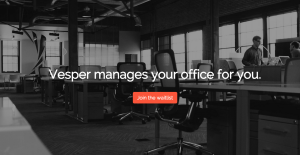 Vesper is focused on eliminating the headaches of office management.

The company invariably brings to mind Managed by Q, another venture-backed startup that handles all the cleaning, maintenance and re-stocking of the office.

Where Vesper differs, in part, is that Vesper actually places a concierge-like employee with its customers on a part-time basis so their point of contact can figure out everyone’s favorite coffee, schedule repairs, and stock supplies, using the help of the many vendors with which Vesper is currently forming relationships. (The idea, presumably, is that Vesper can offer products to its customers at a lower cost to itself if it’s buying in bulk.) 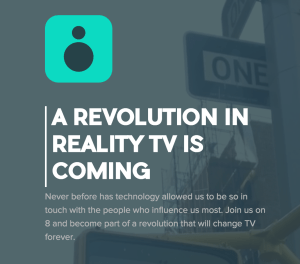 8 is a user-generated video shopping platform for Apple TV, mobile and the web that seizes on today’s “unboxing” trend, wherein someone is filmed opening a product for the first time.

Somewhat astonishingly, more than 10 million “unboxing” videos have been uploaded to YouTube so far this year, and by 2017, says 8’s founders, that number is expected to hit 86 million.

The apparent reason: People want to get as close as possible to that first-time product experience. (Or maybe they just really like seeing things ripped open.)

Either way, 8’s app makes unboxing even easier by allowing someone to record a video that’s between 8- and 30-seconds long, then scan a product that he or she likes into the video before immediately sharing it. In fact, the company says it posted 30 videos in October, and that they were viewed more than 450,000 times collectively. Perhaps more impressive, 73 percent of viewers watched the videos until the end. 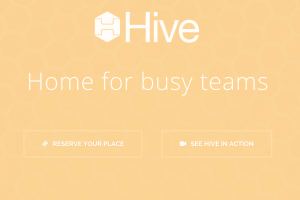 The short and sweet of it: If you use Slack and Asana and Box and Google Drive and Google Sheets and Salesforce and you feel sometimes like your head is going to explode, you might want to check out this company.

It has interesting cofounders, too. One led customer success at the content collaboration company Huddle; another built collaboration technology at the White House.

Bedly is flexible-term housing built for millennial renters — or basically a WeWork for living spaces.

Created for people who don’t love getting locked into year-long leases or setting up utilities or furnishing their own apartments, Bedly promises to do away with all that hassle by creating a network of units that are furnished, and come clean and up and running with flexible term leases.

Already, the company says it has access to 79 units in New York and Boston care of a partnership with the real estate development and construction company Bozzuto Management. It’s also closing a deal with Boston-based Hodara Real Estate Group soon.

Zum is an on-demand platform that provides rides and care for children ages 5 to 15 years old.

The months-old startup isn’t the first to seize on parents’ anxiety about who is driving their kids around. HopSkipDrive and Shuddle have both received venture funding by selling themselves as the Uber for kids.

What’s different about Zum, seemingly, is the level of care and attention families receive. This is a high-touch service that provides families with access to a “team” of no more than five drivers, so their kids always know the person who is picking them up. Zum also offers extensive care packages, so if a parent can’t make it to that dental appointment, a Zum employee will not only drive junior to her teeth cleaning but stick around and return her home, too.

Whether Zum is affordable enough to a wide enough swath of families is probably the big question; presumably, all that service comes at some expense. Still, the company says that since launching in the Peninsula region of the Bay Area in June, it has provided rides to more than 12,000 children and generated $360,000 in revenue.

Telepat is a real time communication stack designed for the Internet of Things.

Its pitch: Streaming big data over different infrastructures both on cloud and on-premise means that every Internet of Things product today has to reinvent its own software stack. But Telepat says its real-time data synchronization service completely nullifies the problem.

There’s apparently healthy interest in its offering. Its founders say they outsourced part of their technology recently and put it on Github, the site that hosts code for programmers. Within almost no time, they say, they saw 1,200 deployments, and they insist those developers are now “advocates” of their technology. (Another advocate, apparently, is the European Commission, which recently gave the company a $250,000 grant to work on its technology.) 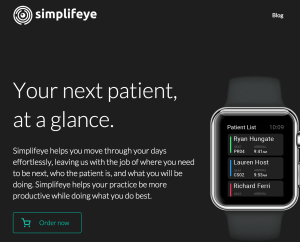 Simplifeye is a SaaS platform for medical offices that connects wearables like the Apple Watch to health record software.

The idea here is that these offices are stuck in a desktop mentality. They may be digitizing their medical records, but they aren’t doing anything with that information.

Simplified helps port all that useful data to the doctor’s wrist, so she can easily receive pertinent medical alerts and see what she’ll be doing for her next appointment (among other things).

Doctors must like the idea, too. Founded by an orthodontist and a former late-stage VC associate, Simplified already has 200 paying customers and it says it launched just three weeks ago.