Tumblr today has launched a feature that its user base has wanted for some time: messaging. The blogging platform has long offered an inbox feature and way for its users to ask each other questions, but now it has added threaded, instant messaging as well. The feature is rolling out now on the web as well as within Tumblr’s mobile apps on iOS and Android.

Not all users will immediately have Tumblr Messaging, given the staged rollout. Instead, those who see a “smiley balloon” (pictured above) hanging on their screen will know that the feature has been turned on for their account. At that point, if you choose to message another Tumblr user, they, too, will receive the messaging feature, if they didn’t already have it.

The broader rollout will take a few weeks to reach all of the Tumblr user base, the company says.

In order to access the feature on mobile, you’ll need to update to the latest version of the Tumblr mobile app.

Currently, messaging is available to almost any blog, except those that are private or group blogs. And unlike the Tumblr “Ask” feature, instant messages cannot be anonymous. That is, the recipient will at least by able to identify you with your Tumblr account information, though that may not mean they know your real name if that isn’t information you’ve already provided on your site. 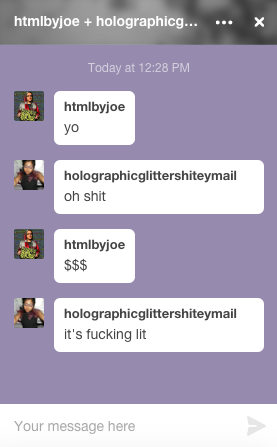 Users are in control of how they can be reached via instant messages, Tumblr says. While any blog is able to message you, there is an option to limit incoming messages to only those Tumblr users you follow. You also can’t message anyone who’s blocked you, of course.

To use the feature from the web, you’ll tap the chat bubble at the top right of your dashboard. On mobile, there will be a similar chat bubble you’ll also tap. Next, you’ll enter in the blog name belonging to the person you want to message, then type in your text. That’s about all there is to it.

In addition, Tumblr notes that the Messaging rollout will impact how its Fan Mail feature works going forward. Effectively, Messaging will replace Fan Mail. The change will not affect users’ older Fan Mail messages, but any outgoing items in the future will have to be shifted over to the Messaging platform instead. However, there will be no changes to the way that Asks and Submissions now operate.

Though seemingly a minor feature release, Messaging has the potential to transform Tumblr into a more social service than it is today, as it gives the platform a real-time, engaging element. That not only plays well on mobile, where push notifications can pull users back into the Tumblr app and keep them interacting with Tumblr’s platform for longer periods of time, but it also gives Tumblr the basis of platform which could be improved over time to add more rich media features, akin to those found in other messaging apps.

Tumblr’s power users have been taking advantage of instant messaging for some time, through third-party extensions like the popular XKit. That indicates there is some demand for this type of activity on Tumblr’s service. But Tumblr’s younger user base often reacts negatively to changes, so there could be some pushback against Messaging when it first debuts. Already, some users are complaining because of the way it replaces Fan Mail, while others are cautiously optimistic.

What’s interesting about Tumblr Messaging, versus Facebook Messenger or WhatsApp, for example, is the potential it has to connect people who may not know each other offline, who aren’t real-world friends. Instead, Tumblr’s differentiator is that its users often connect around interests – fandoms, for example, or various personal issues they are uncomfortable discussing with friends and family.

The company hints that the launch of the Messaging service today is only the beginning of its plans around instant communications. In time, the company will add support for other things that makes sense for its user base, including GIFs and video.