In an open letter to the Office and Management and Budget’s Intellectual Property Enforcement Coordinator, Google announced today that it opposes the practice of removing entire sites from search results.

In their recommendations to the Joint Strategic Plan, Google stated its opposition to the current practice of whole-site removal. This is when search platforms like Google remove entire domains from search results if any part of them contains infringing materials.

The company explained that this approach often led to the censorship of lawful material, since domains containing infringing material include blogging sites and social networks, of which only very small fractions normally contain infringing content.

“It is rare indeed for a site to consist wholly of infringing material,” the company added in the statement.

The move comes after the Motion Picture Association of America’s response to the same public solicitation for the Joint Strategic Plan strongly recommended that search engines ‘delist’ sites based on judicial determinations of infringement. If a court found infringing material, in other words, the MPAA would want them to, effectively, kill off the entire site.

“Delisting in this context means that no results from a particular site would appear in any search results,” the MPAA said in its letter.

The MPAA cited a Millward Brown study that it commissioned in 2013, which found that search engines played a role in a fifth of all sessions leading to access of infringing sites and materials.

While Google cited freedom of speech concerns being the primary driver for the company’s news policy, it also spoke on the whole-site removal strategy’s ineffectiveness. Removal of entire sites often just shifts piracy to new locations, it explained, using the example of infringing sites quickly replicating and moving from one mirroring site to another.

The approach to such sites dedicated to piracy, such as well-known The Pirate Bay, explained Google, is to attack their revenue streams. Revenue streams for sites hosting pirated content are often through online advertising, whose providers are legitimate and prosecutable companies.

The MPAA also agreed that targeting revenue streams was an effective strategy, itself using the example of working with advertising networks. Along with advertising associations like the Association of National Advertisers, the MPAA launched the Trustworthy Accountability Group (TAG), which helps advertisers screen websites that are likely to contain infringing content.
“TAG’s Brand Integrity Program Against Piracy aims to help advertisers and their technology partners screen out websites that present unacceptably high risks of engaging in copyright or trademark infringement,” the MPAA said in its letter.

A larger factor to consider when looking at Google’s global presence is the precedent that whole-site removal sets for countries with lax free-speech protections. A precedent of whole-site removal could be used to justify removal of dissident speech and free political thought, the company explained.

“If the U.S. embraces such an overbroad approach to address domestic law violations (e.g., copyright), it will embolden other countries to seek similar whole-site removal remedies for violations of their laws,” Google added. 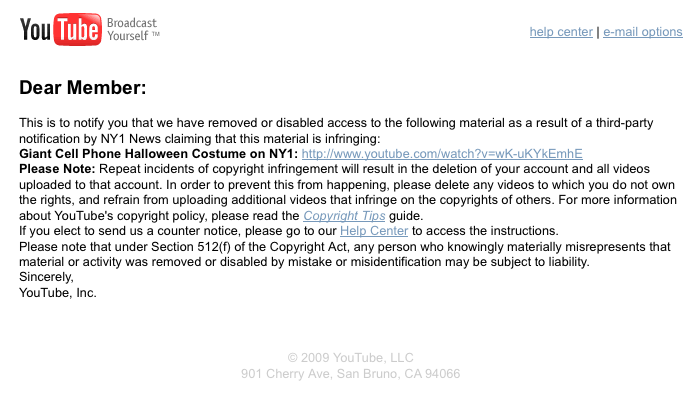 Google’s move against whole-site removal comes a day after YouTube mandated that top video creators become a part of YouTube Red, a new $9.99 monthly ad-free subscription. In the company’s statement to the Intellectual Property Enforcement Coordinator, Google cited the success of YouTube’s ‘Content ID’ IP enforcement system, which references uploaded videos against video ‘fingerprints’ in YouTube’s database. YouTube currently hosts large quantities of infringing material, but it is possible that YouTube’s recent move will reduce this using the ContentID system.

In the meantime, though, college students can rest easy knowing that access to free resources and entertainment for procrastination remains within easy reach.

Disclaimer: I am a college student. TechCrunch does not endorse consuming, accessing, or sharing infringing material.