Egnyte’s new tool, called ‘Smart Reporting & Auditing File Service,’ is a dashboard environment that allows managers to dig into content creation, access and the like across their networks.

Egnyte has transitioned over the last year to what I described previously as an ‘intelligence layer.’

That sounds fancy, but in practice it isn’t too hard to understand. Essentially, no one wants to sell storage now, because the margins are nil to negative, and monied incumbents will happily bleed you dry. So if you are a company like Egnyte with a focus on both on-prem and cloud storage, you might position yourself in between and in the middle of both.

All that plugs into what the company released today. The new Smart Reporting tool provides information about a company’s data, regardless whether it is stored on-prem or in the cloud. I asked Egnyte for a sample screen: 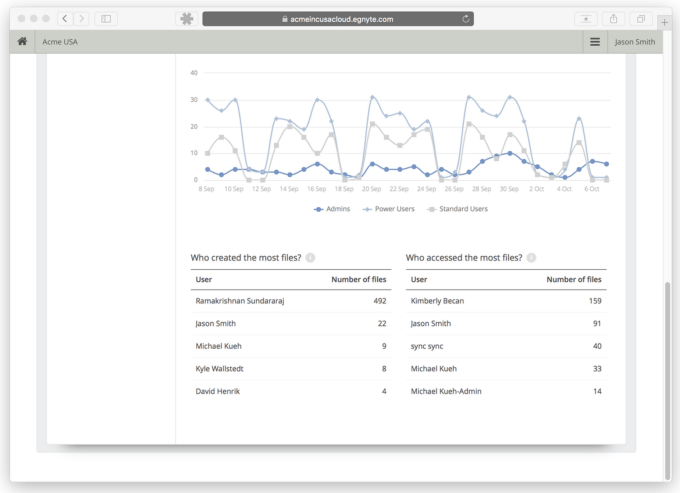 The tool can also track link usage, activity by device varietal, model, and what storage products are in use. It’s something like a window into what workers are doing with content at any given point. According to Jain, the new tool is free for all current Egnyte customers.

Egnyte has a history of being open with its financial results, something that I appreciate. During an interview with TechCrunch, the firm dropped a few new data points:

We can vet two of those against the company’s past projections. On the gross margin point and cash burn points, here’s what the company said in January:

The company appears to be in modestly rude health. It expects its gross margin to expand from 68 percent in 2014, to 74 percent in 2015. Egnyte also expects to reach cash-flow breakeven this year, and profitability in the first quarter of 2016.

The company’s gross margin estimate appears to be nearly dead-on. Its ramp to profitability appears to be slightly behind schedule, but not by more than a quarter or two. Jain told TechCrunch that his company’s channel sales strategy hadn’t performed as well as he had hoped. That could be the cause of the cash-flow break-even delay.

(It’s worth noting that the company projected that it would be cash-flow break-even during the last quarter of 2014, in 2013.)

What isn’t clear at this time is the company’s current annual revenue run rate and its projection for GAAP full-year 2015 revenue. The company previously said that it would rack up $100 million in revenue during the current year. When 2015 concludes, I’ll press them for a figure.

For now, Egnyte is doing what it said that it would. Now it’s up the market to react.

IMAGE BY FLICKR USER ROBERT SCOBLE UNDER CC BY 2.0 LICENSE (IMAGE HAS BEEN CROPPED)