The New York Times is launching a new initiative today aimed at converting those who occasionally buy a printed newspaper into digital customers: it’s offering a digital “day pass” for print customers that will allow them to access the NYTimes.com website and mobile apps for free for the day.

While it may seem like the kind of person who still picks up a printed newspaper isn’t exactly the same demographic who would be interested in reading online, the NYT hopes that by pushing these users to create an account with the paper – including a username and password combo- and then letting them sample the digital edition, they’ll be more likely to convert to digital subscribers in the future.

According to The NYT, the newsstand copies of the paper beginning today will include a promotional code that grants a day of free access to the online edition. The customer will use the provided keyword which they’ll send to a mobile short code via text message in order to start their free subscription. Afterwards, The Times responds to the customer with a link that will activate digital access. 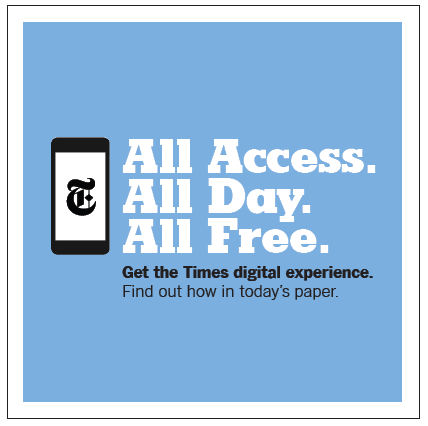 To redeem this temporary access, customers have to login to the NYTimes.com site or, if they don’t already have an account, they’ll need to register using their email address and password. When this process is complete, the customer will be able to take full advantage of digital access, including the ability to access real-time news, video, interactive content, and blogs. Access lasts for the full day, ending at 11:59 PM ET on the same day the code is distributed.

In tests, the process of using the code was fairly quick and painless. You text the shortcode, click the link returned, then log in or register. The whole affair took less than a minute.

The company describes the promotional codes it’s offering as a trial, explaining that it hopes to “expose retail customers to the benefit of digital access.” The trial has no definite end date as the company plans to gauge customers’ response to determine its next steps.

“The goal is to drive incremental loyalty among our newsstand customers and to also give them a similar benefit to that of our home delivery customers, who receive All Digital Access complimentary with their subscription,” a spokesperson for the paper explains. “We also want to give newsstand customers a taste of all of the additional content available on NYTimes.com and our mobile apps, that they can’t get with print,” they add.

The Times is currently sold in 48,000 retailers nationwide, including Starbucks and Hudson News. Its single copy distribution for retail accounts, hotels, airlines and college campuses is approximately 117,461 copies Monday through Friday, and 173,955 copies on Sunday​.

Like all newspapers, The NYT is focused on making the digital transition in order to continue to grow and manage its business. While a number of publishers offer news content for free, while generating revenue through other means, like ad sales, The NYT bet on using a paywall that keeps its content for its paying customers in addition to ads. Despite putting this barrier in place, the company recently hit the milestone of 1 million digital-only subscribers, and its digital-only revenue will near $200 million this year.

Growing digital subscribers is critical to the paper’s bottom line. As NiemanLab also reported in August, only a small percentage of Times readers generate a huge part of its income. The site sees around 60 million uniques (U.S.) monthly, but only 1 million of those pay via digital-only subscriptions. (The Times also has 1.1 million print plus digital subscribers.)

However, other attempts at getting digital customers to pay for NYT content have not fared as well. The NYT Now app, aimed at a younger demographic with an under $10-per-month subscription plan gained 20,000 new subscribers before turning into a free product monetized through sponsorships, not paywalls. The company admitted that while the app had struck a chord with younger users, it hadn’t seen the number of subscription The NYT had aimed for.

It remains to be see whether or not teasing NYT print customers with a free day of digital access will actually boost the paper’s subscription revenues, as is hoped.

The move comes at a time when a number of newspapers are experimenting with new business models for the digital age. For instance, Jeff Bezos’ investment The Washington Post, is being offered to Amazon Prime members for free for 6 months as a promotion.