Blocks has been a very long time in getting off the drawing board — and still remains a prototype at this stage, some two years into development — but the modular smartwatch concept has finally landed on Kickstarter, in what the U.K.-based startup is hoping will be the last push to get their idea to market.

Backers putting money down to pre-order the smartwatch are being offered an estimated shipping schedule of May 2016 — assuming the team can raise the $250,000, via Kickstarter, to fund the first round of manufacturing.

The current status of development is an engineering prototype (pictured below with the TC logo uploaded to it) for core testing, and separate design prototypes to test aesthetics, ergonomics and materials. Co-founder Ali Tahmaseb says the first test units embedded in the final design are planned for the end of December. 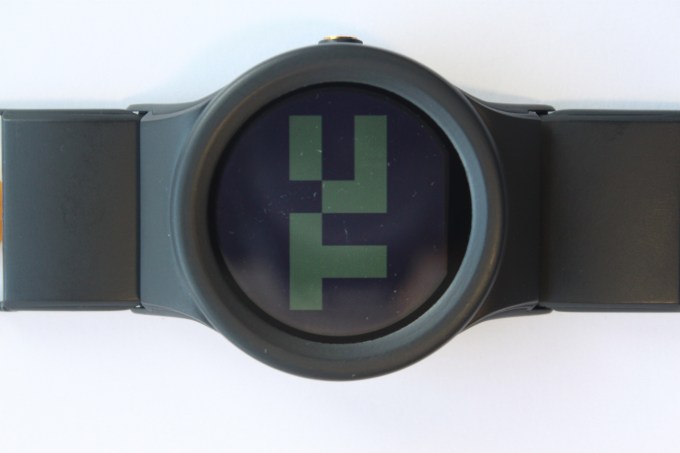 “The development of the Core has been done. Initial designs for Modules are done, components are selected. The Modules are made at prototype stage but the electronics for the Modules for the final product needs to be produced and tested,” he adds, discussing what development work is still outstanding at this stage.

“On the software side, the Android optimizations are mainly done. We have partnered up with a software company with very talented engineers previously in the Google Android team, that are working on even more optimizations and interactions. We have done an initial version of our launcher and menus but are still working on the User Interface.”

How confident is it of delivering finished product by that May 2016 shipping schedule? “We have selected components and designs that are reliable, previously tested in other devices, and easy to manufacture. Our ODM has extensive experience in bringing very high quality consumer electronics to market. Our main innovation is in the industrial design, connectors, and communications which have been done by our team. Therefore, it is a good estimate,” is how Tahmaseb couches it.

We first covered Blocks back in March 2014 when it was demoing a video of its modular smartwatch concept. It was actually founded in November 2013, by two students from London’s Imperial College, right after Motorola outed the Project Ara modular smartphone concept. (The latter also remains in development, in-house at Google, and the team behind that project recently delayed a planned pilot launch til next year — so it’s amply clear modular consumer tech development is no cake walk).

Blocks has a Taiwanese manufacturer (Compal) signed up to put the piece of its modular smartwatch together, if all goes to crowdfunded plan. The device consists of a core module (the watch face), plus a series of individual strap links that each support additional functionality, such as adding more battery capacity, or GPS navigation, or a heart rate monitor. The idea being the user gets to spec out their own smartwatch requirements.

There are five initial modules in this first Kickstarter funding phase: the three aforementioned modules, plus NFC for contactless transactions, and an “adventure module”, which will output live readings for altitude, pressure and temperature, to appeal to outdoor sports types/hiking enthusiasts.

The core Blocks watch face module can also function as a standalone smartwatch on its own — and is available to Kickstarter backers for $195, paired with a basic watch strap (adding yet another notifications-centric smartwatch option to what is already a crowded marketplace). But those wanting to take full advantage of Blocks’ modularity — which is really its USP at this late-to-market point — will need to shell out at least $250 (the early bird KS price) for the core module plus four additional modules that link together with a clasp to form the strap.

The standard price for this module package is $275 — which positions Blocks at the higher end of the notification-focused smartwatch market vs rivals such as Pebble (Pebble’s latest model, the Pebble Time Round, starts at $250; although an entry level Pebble costs around $100). Price-point wise it’s not that much cheaper than the more polished and premium wrist-wear being designed in places like Cupertino and Korea. The Apple Watch starts at $349, for instance, while Samsung’s Gear S2 starts at $300.

Given its higher end price-point, Blocks seems likely to face a challenge to carve out a fan-base in such an already fiercely contested space — unless it can convince people the novelty of modularity is worth taking a punt on a wearable newbie.

There are other constraints here too. For instance, Blocks notes that people with smaller wrists may find they can’t accommodate its standard four modules, so — for some users — the device’s customizable potential will be constrained to just three modules (i.e. in addition to the core module). Although, on the flip side, the very large-of-wrist might manage to fit five modules. (Blocks says backers will be able to specify the functionality, and color, of any modules they are pre-ordering at a later point.)

These modules are apparently hot-swappable, as you’d hope. The process of removing them is touted as easy enough to do when out and about on the go. “It is plug-and-play, replaceable in seconds and no need to re-boot the device. No tool is required, the pin comes out by a small push of the finger,” is how Tahmaseb describes the process.

This summer the startup confirmed it was using a modified version of Android Lollipop as the software base for the smartwatch, rather than the Google Wear platform. The device is, in any case, designed to be compatible with both Android and iOS mobile devices. The team is also hoping to build out an open hardware ecosystem — and will be opening up to third party hardware makers wanting to build and sell their own Blocks modules, via a planned Blocks Store in future.

“We anticipate modules for gaming, sports, healthcare, the workplace, or even experimental ones for academic research,” they note. Such ambitions are of course dependent on Blocks managig to build out a healthy user-base for its smartwatch in order to support an ecosystem of developers, although they claim to have signed up some 1,500 interested devs ahead of the release of their Module Development Kit. And claims to be already working with “some large tech companies” on third party modules.

On the apps front, an app dev kit will also be coming — at least a month before the device ships, according to Tahmaseb. He says it’s making “all the standard apps” itself — such as “Calendar, Alarm, Clock, Reminders, Notes, Voice Memos, Activity Tracking, Battery Monitor, Module Manager, Notification Bar, etc”. And is also intending to reach out to “mainstream third party apps” to try to ensure their wares are also available in time for launch — though no guarantees on that front of course.

The theory of modularity is, on the surface, compelling. It offers the prospect of apparently outwitting the upgrade cycle, one small additional financial outlay at a time. However, in practice, the cost of these partial upgrades would have to be highly competitive to make it worth users’ while to get involved with the hassle of managing a mixed bag of bits and bobs.

Add to that, the overall complexity of a modular proposition — vs offering pre-packaged products with a clearly designed, ready-to-go out-of-box experience — suggests it’s something that’s likely to appeal only to a niche segment of highly savvy tech users and/or people who want a lot more control over their kit than the average user. Mainstream appeal seems unlikely, although — if you want to stack up the modular contenders — a modular smartwatch does seem an easier sell than a modular smartphone.

Another issue for modularity is robustness. Google’s Ara has apparently been delayed because the electro-magnetic links that had been planned to fix modules together weren’t strong enough to withstand the user dropping the phone.

Blocks’ team doesn’t have to worry so much about users dropping their product, given it will be mostly strapped to their wrists. But a smartwatch still needs to be robust enough to withstand daily wear and tear — so the mechanism for securing and swapping out the modules is a very vital link in the chain here. Bottom line: they really need to be confident of their engineering on that key piece.

Ultimately, companies being responsible for conceiving and designing products with reuse and recycling built in from the beginning — as part of a circular economy that’s deliberately engineered to minimize waste and maximize resources — is a more ideal overall goal than piecemeal per product modularity. But we’re not there yet. So, in the meanwhile, it’s up to the likes of Blocks to be thinking outside the built-in-obsolescence box — by designing something the user can at least remake from a box of discrete bits.