Watson, IBM’s supercomputer best known for winning Jeopardy in 2011, is now a chef, too.

IBM pinged a bunch of the world’s top chefs, then added a dash of their knowledge and a large clump of all the cooking, food and chemical compound data they could pull from the ether to make Chef Watson, a supercomputer program that aims to give us weird and wonderful recipes beyond what humans would come up with.

Like beef and fig on a tortilla chip, topped with ground coffee beans, for instance.

IBM recently invited me to try the above concoction along with a Chef Watson-inspired three-course dinner this last week. I forced the delightfully sardonic TechCrunch writer Alex Wilhelm to come with me for entertainment purposes.

It was an unusually warm evening for San Francisco as Alex and I trudged up some dark and winding stairs into a hidden entertainment space. We were the last to arrive upon a scene of 20 some-odd IBM execs and members of the press at Cookhouse in San Francisco’s North Beach neighborhood.

“Put your things over there and come grab a cocktail,” one of the helpers instructed us, handing me a concoction of prosecco, cardamom, thyme and lime leaf (another oddly refreshing blend from the mind of Watson). 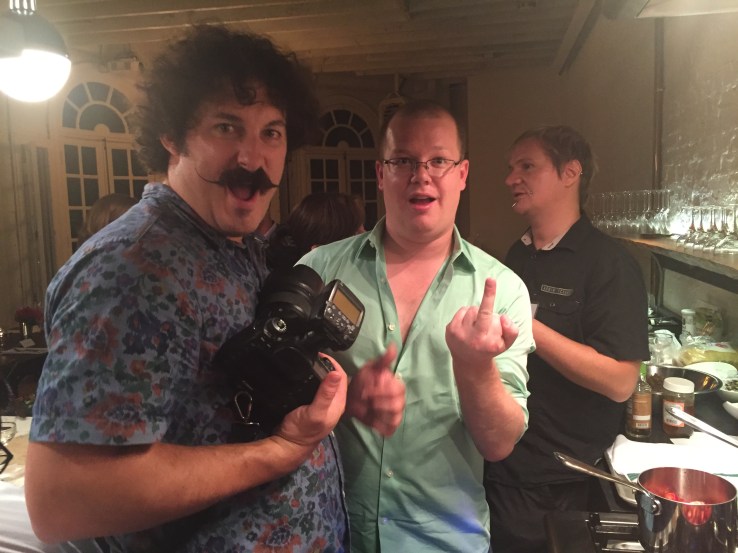 The Institute of Culinary Education (ICE) partnered with IBM to create the funky dining experience with culinary master (and Food Network’s Chopped champion) James Briscione. Chef Briscione used Watson to create our meal for the evening, but informed us that IBM’s supercomputer was not actually doing the cooking – we were.

Alex quickly deduced flipping celery and a few chicken burgers would be the easiest part, volunteering us as tribute for grill duty. There’s not much you can do while waiting for the meat to cook besides turning it over when it looks ready so we sipped cocktails and took Instagrammable food photos while everyone else chopped.

The chicken burgers were part of the main course, consisting of ground chicken, basil, coriander and topped with brie. Strawberries simmered in a saucepan next to us on the stove, melting juices and becoming a soft mash that Briscione would later use to make strawberry ketchup.

Was this meal something Briscione could likely come up with on his own? Chicken burgers aren’t that left field, but strawberry ketchup on that chicken burger is where things start getting weird (for the record it tastes like jam and I think it is actually just jam on a chicken burger they called ketchup for the evening).

“Watson taught me to really be creative,” Briscione told the crowd before we started digging in. “As a chef you spend so much time trying to conceive and create a dish and all of your energy gets wasted just picking out the ingredients.”

Briscione pointed out an appetizer that looked like a sort of a stuffed fruit roll-up. “You’ve probably had something like this,” he said, pointing to a plate of little rolled red pieces. “A roasted beet salad with truffle salt, truffle vinaigrette, some goat cheese, and almonds. That’s the easy approach to those ingredients.”

Instead, Briscione took those components, made the beets and truffles into fruit leather, stuffed them with goat cheese and dipped them into toasted almonds. “That’s the idea here. How we can take new information, focus on it and become more creative with it,” he said.

But you don’t have to be a master chef at a top restaurant or cooking institution to cull from Watson’s foodie mind. Non-culinary craftspeople like you, me and Alex are also able to whip up our own concoctions using Chef Watson’s web app.

I went to the site after dinner to create my own potentially inspiring recipes. You can either start by choosing one or a few ingredients. Watson will put together some ideas for you just off that, but you can go even deeper by choosing a style of meal (American, Asian, someone’s birthday) or type of dish (barbecue, kimchi, margarita) and Watson will whip something up from there.

Head of engineering for the Chef Watson project Florian Pinel explained that it works by pulling together certain chemical compounds in the ingredients for each dish. Some of Chef Watson’s most recommended ingredients are coffee, tea, and beer because of their versatility. Coffee has over 100 useful flavor compounds, for instance.

As a chef you spend so much time trying to conceive and create a dish and all of your energy gets wasted just picking out the ingredients. Chef James Briscione

IBM tells us Chef Watson has already helped discover a few close ingredients that work better together that one wouldn’t instinctively think of. “We found out apples had more in common with aromatic compounds from olive oil than butter, for instance,” Pinel said.

Watson is easier than scouring the web for hundreds of recipes that might work. I also like that I can type in an ingredient (or two or three) I might have in excess I need to do something with and it will pull up ideas for me, but it is not here to replace our human chefs. At least not yet.

There’s still something delightful about experimenting in the kitchen. In my case, this has sometimes led to hysterical results worthy of a good laugh-cry and a vow to just order Postmates next time, but it’s also driven plenty of chefs to new cooking discoveries.

Rather than replacing human cooks, IBM hopes Watson will lend an extra hand in the creative process – and offer more ways to delight our taste buds with more than a dash of data and a hint of science.