“Yeah!” Facebook CEO Mark Zuckerberg said excitedly in response to a big question for his company: is Facebook working on augmented reality? “It’s a bit further out,” he followed up during a talk about virtual reality at the Vanity Fair New Establishment Summit in San Francisco.

Facebook’s intentions in virtual reality were already clear after buying Oculus, which is already shipping units in partnership with Samsung and is prepping the launch of its flagship headset. Facebook’s Michael Abrash said virtual reality is already “past the knee of the curve,” and has basically arrived. But augmented reality, by its nature, presents a new type of problems, Abrash said — hence it taking a little longer for it to become as feasible as virtual reality.

“It’s very interesting; it’s something we’d all use if it worked well,” Abrash said. “It’s kind of seamless. Maybe it’ll be contacts [or glasses]. You’ll have something on and it’ll be VR and AR as you choose. But right now the VR tech is past the knee of the curve. For AR, it’s harder. There are a whole host of challenges — how you do the optics and displays and get photos onto the eyes, how you have something that’s socially acceptable and comfortable all day. I think VR is here now, I think AR will be here, but it’s a long road to get there.”

Augmented reality represents a different opportunity for Facebook than virtual reality. With VR as is, the Oculus Rift is designed to be an immersive experience that essentially helps the user shut out the rest of the world and focus only on the experience. It will let people experience intimate moments. An example Zuckerberg gave was giving family members the opportunity to watch a child take its first steps.

“It’s very interesting; it’s something we’d all use if it worked well.” Michael Abrash

“What Facebook is, is a way to give people a voice to share anything that they want in any form of medium with any audience they want,” Zuckerberg said. “Certainly this more immersive content will be an increasing portion of what gets shared. But another part of the beauty of Internet communication is it’s asynchronous. [But there will be] use cases where you can be in person with someone, doing surgery remotely, that you very much need to be synchronous.” 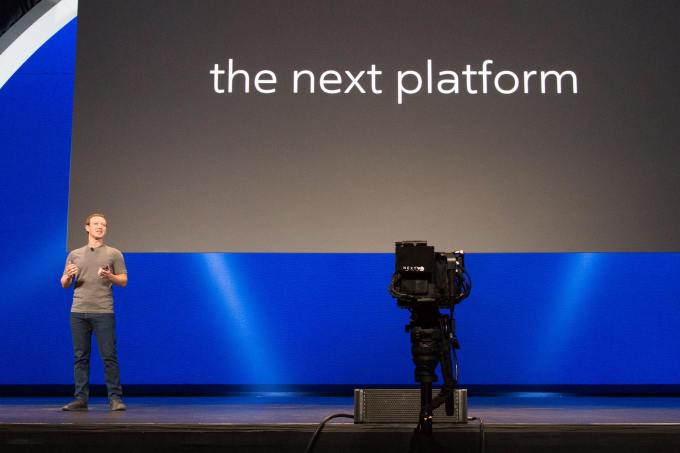 AR, however, is about keeping a connection with the world around the user. The implications for a Facebook-driven AR system are pretty obvious. Imagine, maybe, walking down the street and getting a heads-up display for the number of likes a business has. By definition, AR is supposed to augment a user’s vision and give them the capability to do more with the world around them, and Facebook can use that to power a whole suite of new experiences.

Facebook won’t be the only company working on augmented reality, but it certainly has the ability to become a juggernaut in the space. There’s also the looming presence of the notoriously quiet augmented reality startup Magic Leap, which received a massive investment from Google. And of course, the classic problem case here was Google Glass, which ended up with social backlash rather than acceptance of the new technology.

So while Zuck and Abrash gave few details on exactly how Facebook’s AR dreams will be delivered, the mere confirmation that it’s looking beyond VR is important. Its facial recognition combined with AR could have wide-ranging use cases. Facebook knows more about people and the world they live in than almost any company. Eventually, it could overlay that information right on the world itself so you can look up from your screen, and instead look through it.