YouTube has rolled out a notable – and clearly, divisive – update to its iOS application which introduces Google’s now-familiar “Material” design style to the application alongside a handful of new video editing features. The latter, which is somewhat reminiscent of the tools found in iMovie, allow users to trim their clips as well as add filters and music prior to uploading their video. However, not all iOS users are pleased with the changes – some railing against the aggressive red bar at the top of the app, and many more lamenting YouTube’s failure to include multi-tasking support and other iOS 9 features, such as picture-in-picture.

While it makes sense that Google wants a consistent look-and-feel for its products across platforms, desktop web, mobile web, iOS and Android, sometimes its choice to use the far more Android-friendly “Material” design aesthetic falls flat on iOS. YouTube’s iOS update is an example of that.

Early adopters are currently filling the App Store with one-star reviews of the app’s redesign, claiming that the new layout involving the “garish” and “harsh” red header wastes space, while the changes to navigation actually require more swiping and tapping to get to content that used to be within easy reach.

Most reviewers are complaining that by doing away with the left sidebar, it’s more difficult to access things like subscriptions, history and playlists – sections which used to be located all in one place. In fact, losing easy access to subscriptions, in particular, is among the top complaints.

“Now I have to press a back button to go to a different channel,” laments one iTunes reviewer, summing up the overall sentiment succinctly. “Basically, this update got rid of all of the simple functionality that the app had, and replaced it with big pictures and pretty colors.”

“Pretty,” of course, is arguable. 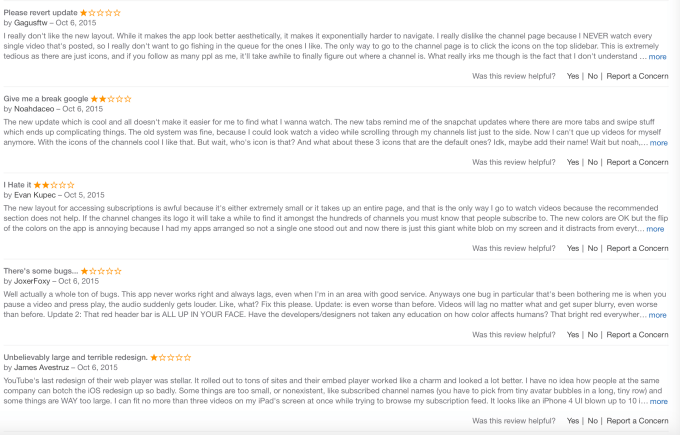 Meanwhile, iOS 9 upgraders point out that YouTube missed the opportunity to add support for new iOS features like Picture-in-Picture, plus SlideOver and Split View (multi-tasking features for select devices).

The video editing features are handy to have included, if fairly basic in their functionality. But their addition is being overshadowed by users’ negative reaction to the layout and navigation changes and the missing support for iOS 9 features that a number of other top-tier apps have adopted, including MLB At Bat, Hulu, BBC’s iPlayer and others.

I f*cking hate the new youtube app for iOS. It looks androidish! Wth!! That top part is blinding red!!! pic.twitter.com/C9EtRAnvVA

What has YouTube done to its iOS apps? The new layer and red/white colour scheme looks awful!

The new iOS YouTube app is horrendous. Who signed off on all that red?