A company that saw the potential in the iPad as a tool for work, not just play, is PlanGrid, a construction management software application that’s like a Google Docs for blueprints. But getting the PlanGrid app into the hands of general contractors, construction workers, architects, engineers and others on the project team – people who traditionally use paper documents, and in some cases, aren’t necessarily tech’s early adopters – was one of the looming challenges facing the company in its early days.

However, that’s an obstacle the multi-million-dollar company PlanGrid has managed to overcome. The app, which today has 650,000 users, both free and paid, is a testament to the power to disrupt industries which had largely been ignored by software developers.

As co-founder and CEO Tracy Young explains, PlanGrid’s biggest competitor is not another mobile application on the iTunes App Store or Google Play – “it’s paper,” she says.

Young’s background as a construction engineer placed her in the perfect position to see the problem of an industry that operated on paper. She saw paper architectural drawings that cost hundreds of dollars to print out, and realized there could be a better way.

“The paper problem is very obvious to any construction manager and construction engineer in the field,” she said, speaking on stage this morning at the TechCrunch Disrupt 2015 event in San Francisco.

But you couldn’t easily drag a personal computer out to the job site. That’s why, when Steve Jobs introduced the iPad in 2010, Young immediately saw how revolutionary the device could be in her industry.

Young explained that in construction, plans are constantly changing, too. For example, if a wall is going to be moved 50 feet, you would need another set of blueprints. Or really, dozens of prints for everyone on the team.

In addition, it’s not uncommon for things to be built off the wrong set of drawings because of delays in getting new plans into the hands of construction workers. In fact, she recalled one incident when she was working as an engineer where a room was rebuilt five times because of this exact issue.

With PlanGrid, the original idea was to allow everyone involved with a construction project the ability to view the blueprints on their iPad through a simple interface that even the least tech-savvy workers could use.

Over time, the app has expanded its capabilities. Today, customers use PlanGrid to share plans, markups, photos and reports with their entire project team. It also now works on both iOS and Android devices, and allows users to collaborate even while offline. The latter feature is necessary due to the nature of the construction work, which is often far away from Wi-Fi signals or strong cellular coverage.

Young’s story of how PlanGrid came to be is one that’s inspiring to anyone working in a field that hasn’t yet been impacted by the tech or mobile revolution at the same scale as others. It’s about seeing a problem firsthand, and believing that you’re the one capable of solving it.

Still, growing PlanGrid to a company of now 150 and scoring an $18 million Series A from Sequoia wasn’t something that just happened. The team had to overcome a number of challenges along the way, including the loss of one of the original co-founders to cancer.

“[The co-founder’s death] forced us to ask ourselves if this was want we want to be doing with our lives,” said Young, referring to continuing to build the company. “And the answer then, and the answer now, is yes. We’re the best ones to do it because we actually really care,” she added.

In addition, the team had to figure out how to get their software into the hands of their customers – especially back in the early days when the iPad was thought of as more of a toy than a tool.

One more amusing story Young shared this morning was about how the team maxed out their credit cards to buy iPads from Apple Stores – making multiple trips because of the limits of how many tablets you could buy at one time. After acquiring 18 devices, they then began to worry that their hacker house in Sunnyvale would be robbed before they could get the iPads to customers. So the founders ended up hiding the iPads throughout the house – under pots, and even in the microwave.

Of course, those iPads weren’t stolen, and the rest, as they say, is history.

One thing that Young says has not been a challenge for PlanGrid, however, is being a woman in a traditionally male-dominated field – or rather two fields: both construction and technology.

She also offered some great advice for other women working their way up in the technology field, as well: “Yes, there are haters. But there are a lot more smart, hard-working people who believe that intelligence is equally distributed across race and gender. And they are here to work with you,” she said. 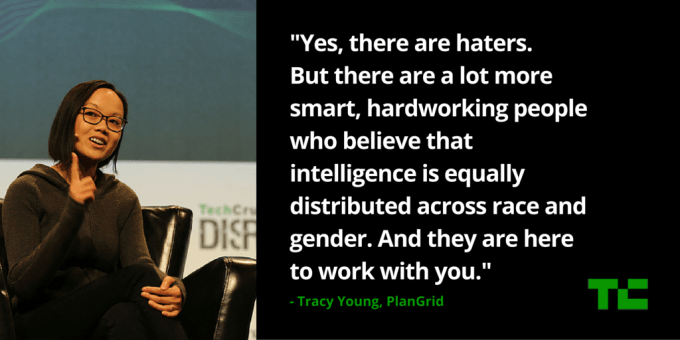 Though PlanGrid has now built a successful business in a paper-dominated industry, the team has no plans to slow down. Not only is there still plenty of room to grow in the U.S., where paper is still used on the majority of today’s construction projects, the challenge PlanGrid aims to solve isn’t only a U.S.-centric problem.

Plus, Young tells us that going forward, PlanGrid’s roadmap will see the company expand to encompass all the other tasks that accompany construction projects through the PlanGrid app, ranging from team collaboration, planning, project management, and beyond. With those goals, there’s plenty of room for PlanGrid to grow for years to come.