For smaller companies, setting up a 401(k) can be one of the most difficult exercises — but it’s still one of the most important ones. That’s why Money Intel is trying to simplify that process and make it easy to set up one in a few minutes.

For small businesses, setting up a 401(k) is one of the most important steps for its employees — both financially and symbolically. The company hopes to attract companies with a simpler pricing model and a short turnaround to set up a 401(k). Money Intel’s goal is to have a 401(k) up and running in just a few minutes by algorithmically preparing the most-common versions of 401(k) preparation documents and giving companies the ability to sign them, and helping employers continually manage their 401(k) plans. Money Intel launched at TechCrunch Disrupt SF 2015.

Employees can then use an online service that helps them plan out their 401(k) investments with simple tools like sliders that will show their rough income after they retire. It offers recommended financial plans — CEO Monte Malhotra and his co-founder Andrew Hallengren are licensed financial advisors — that employ strategies like using index funds, Malhotra said. Money Intel charges a flat $1,500 annual fee and 0.5% of plan assets per year pro-rated quarterly.

“For most people, the 401(k) is their primary savings vehicle, not just for retirement but for everything,” Malhotra said. “For better or worse most companies don’t even offer a 401(k). They do at much larger company sizes, 90% of small businesses don’t offer a 401(k) plan due to cost and administrative complexity.”

Money Intel starts off with the company deciding which plan provisions a company wants to implement. They choose a common 401(k) plan that the company offers and can do some light customization, like what percentage the company wants to match, Monte said. The goal is to help a company figure out which category they fall into, and then help get the plan turned on quickly. There are two common categories, Monte said: plans where employees are immediately eligible for their 401(k), and plans where employers want employees to wait some time before becoming eligible.

Then, the documents are automatically generated based on the provisions those companies set, and the employer can electronically sign them in order to get the 401(k) up and running. These documents are typically very complex and require around a month to complete, but Money Intel hopes that by finding ways to algorithmically generate the most-common versions, it can handle most small business’ needs.

Money Intel helps the companies continually manage the compliance components of a 401(k) and integrates with payroll and HR systems in order to help continually manage the company’s plans as well as new employees are brought on and things change. As companies get larger, they find the compliance services increasingly valuable, Malhotra said on stage at TechCrunch Disrupt SF 2015. 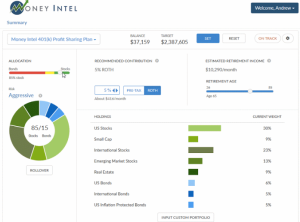 Malhotra says his story started when he was in fourth grade, with a teacher that used investing examples to talk about fractions, decimals and long division. In high school, he wanted to better explain the financial concepts he had learned, and actually wrote a short book on investing for a younger audience. He started a finance club in high school with his co-founder Andrew Hallengren.

To be sure, Money Intel is not the only startup trying to make it easier to create a 401(k) for smaller companies — nor is it the only one that’s launched in the past few months. Captain401, for example, came out of Y Combinator in July and also looks to make creating and managing a 401(k) much simpler. Money Intel’s investment recommendations don’t have a lot of data about the performance of its financial investments yet. “The underlying index and mutual funds we use to invest have decades long performance records which we make available to employees,” Malhotra said.

And of course, there are larger companies that could find their way downstream. Monte argues that Money Intel’s selling point will be that it’s much faster to set up a 401(k) and easier to manage with plans created by Money Intel, and that will convince smaller businesses to sign up.

“Those primary concerns — it’s too expensive, it’s lots of work, why can’t tech fix those things — there’s no reason why complexity and cost should be a factor,” Malhotra said. “And for employees, theres no reason why they can’t get the financial advice.”