So here’s an awkward question … How many of you are reading this article without ads? Don’t be shy if you are. You’re definitely not alone.

You’ll be getting even more ad-blocking options with next week’s launch of iOS 9, which is supposed to support content blocking extensions. That could be a big step forward  for the technology, which has been a largely desktop-only phenomenon until now. Naturally, the news has prompted another round of handwringing about the impact that ad blocking could have on the publishing business.

Even without Apple’s support, ad blocking has been on the rise. There are now 198 million global active users of ad blocking software, up 41 percent from 12 months ago, according to a recent report by PageFair and Adobe. The report also estimates that ad blocking will cost publishers $22 billion in revenue this year.

Some caveats: PageFair isn’t an objective industry observer, since its business revolves around helping publishers circumvent these blockers. Also, the impact on mobile may be reduced as more content is distributed on apps and social networks. Lastly, there have been arguments that ad blocking won’t hurt publishers as badly as you might think, because the ad business has always been “lossy,” with lots of wasted money, whether you’re talking about TV or print.

I’ve been watching the discussion with particular interest and, yes, a little fear, since it’s something that could affect TechCrunch’s bottom line — and with it, my job. So over the past couple of weeks, I’ve been asking people in the media and advertising industry for their perspective. Were they worried? And if so, how are their going to adapt? 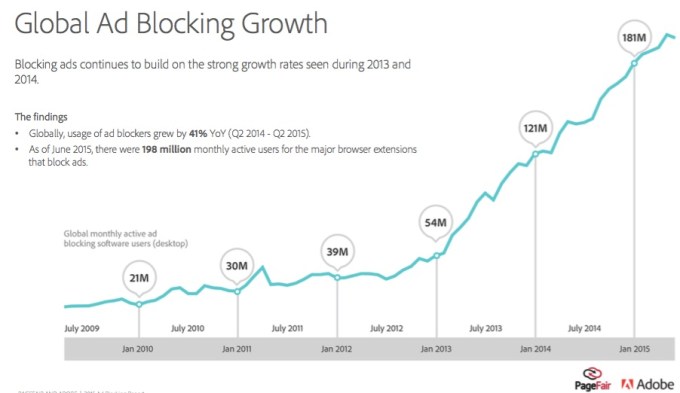 The ethics of ad blocking

It’s no surprise that advertisers and publishers who make their money from advertising aren’t exactly fans of blockers. What is surprising is that no one seemed to disagree with the argument that online ads have gotten out of control. Yes, they said, we’ve all seen ads that are too pushy or dramatically increase load times, and yes, they understand why people are unhappy about how their data gets used to target those ads.

“I think if we don’t acknowledge that, we’d be fools,” said Scott Cunningham, senior vice president at the Interactive Advertising Bureau (a trade organization that helps establish online ad standards). “So does that mean ad blockers are good or right? Absolutely not. Do we have an accountability and responsibility to address these things? Absolutely — and there’s a lot that we’re doing now.”

That was the viewpoint I heard again and again: Yes, there’s a problem, but ad blockers are not the answer.

For example, Harry Kargman, the founder and CEO of mobile ad company Kargo, agreed that in many cases, online ads have created “a bad consumer experience — from an annoyance perspective, a privacy perspective, a usability perspective.” At the same time, he said that as the industry works to solve these problems, it also needs to convince people that when you use an ad blocker, “That’s stealing. It’s no different than ripping music. It’s no different than pirating movies.”

No one ever opted in for advertising online. Ben Williams, AdBlock Plus

Part of this disagreement boils down to how you view the relationship between publishers and readers. On the one hand, you’ve got publishers saying that there’s an implicit agreement that they’ll give you lots of content for free, but in exchange you have to put up with ads. By using an ad blocker, you’re breaking the agreement.

On the other hand, you’ve got folks like Ben Williams, director of operations at AdBlock Plus, who argued, “No one ever opted in for advertising online. It came after the fact.” In addition, he said, “If you’re younger and grew up with the Internet and without necessarily newspapers, then this deal, this implicit deal, is even further away from your mind. You certainly never opted into it.”

AdBlock Plus, by the way, recently released its own ad-blocking browser for iOS and Android. It’s also working on an extension that will block mobile ads in Safari.

But let’s get a little more specific about why people are rejecting online advertising. Naturally, the answer depends on who you ask. 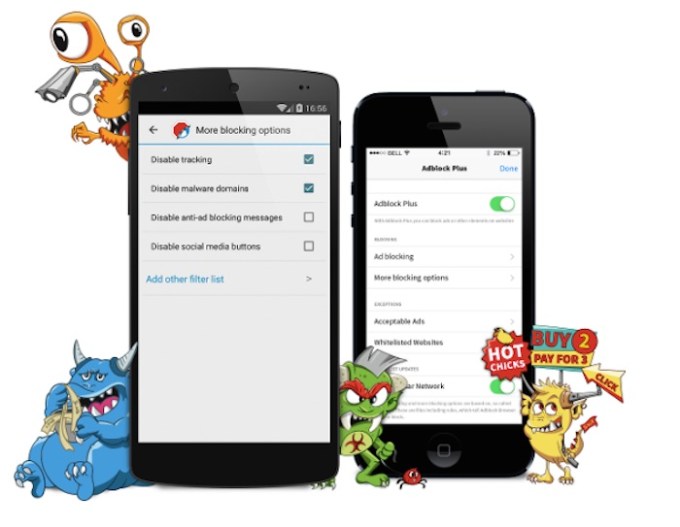 PageFair says it surveyed 400 people in the United States and that found the number one reason they use ad blockers, or would use ad blockers, is, “If I feel my personal data is being misused to personalize the ads” (though PageFair also says ad quantity was the most common complaint among millennials).

Williams, on the other hand, said the number one reason users cite for installing AdBlock Plus is annoyance with ads (though privacy is also a factor, and he predicted that as ad blocking moves onto mobile, “it will be more about data and speed”).

The distinction is important, because different complaints have different solutions. Take Disconnect, which already offers mobile ad blocking software and is working on new tools to take advantage of iOS 9.

Since Disconnect is focused on privacy, it doesn’t block all ads, just the ones that are targeted using third-party data. Co-founder and CEO Casey Oppenheim said that if an ad only uses first-party data (i.e., data from the website you’re visiting), then his software won’t interfere.

“Especially in a world where consumers don’t want to pay for software, advertising becomes critically important,” Oppenheim added. “So just for us, being a blanket ad blocker is not something we’re really comfortable with.”

AdBlock Plus, on the other hand, has created an “acceptable ads” initiative where users are presented with “non-intrusive” ads. These ads look pretty different from the ones we usually see online — for one thing, they’re “preferably text only.”

Williams admitted that the company hasn’t found “the perfect balance” yet, but he noted that only a single-digit percentage of AdBlock Plus users have opted out of seeing those acceptable ads — he said it’s “proof that people will be okay with a certain type of ad.”

Naturally, not everyone in the ad industry is a fan.

“I don’t think it’s a valid approach,” said the IAB’s Cunningham. “You hear the extortion comment all the time, but I prefer to look at it as, it just honestly negatively impacts the value chain between the publisher and consumer.”

Who’s hurting the most?

The impact of ad blockers differs from publishers to publisher, with gaming sites seeing the largest number of ad-blocked readers. It can also represent a significant amount of traffic for non-gaming sites that cater to young, male, tech-savvy audiences, like TechCrunch.

When I asked about how much of our traffic comes from ad blockers, I was told that TechCrunch-owner AOL looked into the issue about a year ago. At the time, it found that ad blockers accounted for 20 to 24 percent of traffic to AOL Tech sites, pretty much in line with other tech-related news sites. 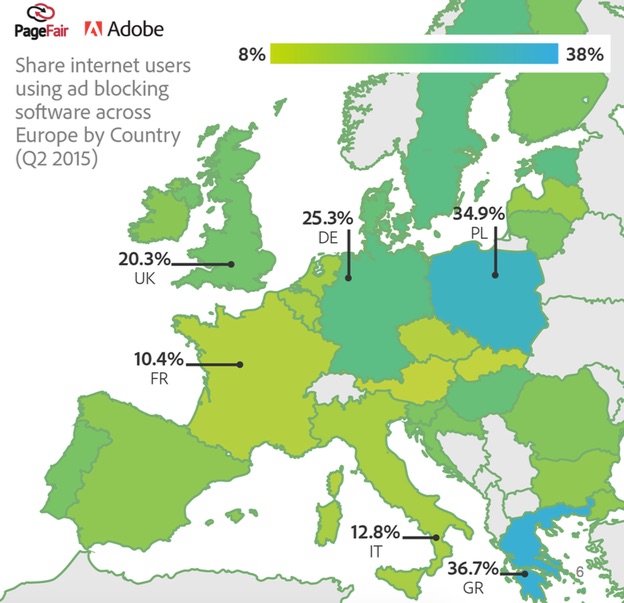 On the other hand, a company like Spanfeller Media Group caters primarily to women through its site The Daily Meal, so it’s seeing less than 10 percent of its traffic coming through ad blockers.

Even in that case, CEO Jim Spanfeller said ad blocking will become a concern if the trends continue. And while he admitted that he was “pulling a number out of thin air,” he predicted he’d really start to get worried once ad blocking got up to 25 percent.

So he’s not just sitting around waiting for that to happen. Spanfeller said he’s already looking at potential workarounds, whether that involves hiding content until people turn off their ad blockers (“But we’ll say it nicer than that”) or asking users to pay if they don’t want to see ads. He acknowledged that those tactics might anger readers — but, well, those are readers he’s not making money from anyway, so he’s not sure they provide much value.

“Are people pissed when they walk into a store and they don’t get a car for free?” he asked.

Other publishers are already experimenting with different anti ad-blocking tactics. And there are startups like Sourcepoint and the aformentioned PageFair helping publishers to serve ads to users, even if they’ve got an ad-blocker installed. (Williams was particularly opposed to that last approach, describing it as “a short-term decision, an anti-user decision.”) I’m told that AOL is building new tools to track ad blocking and to monetize adblocked pageviews as well.

“Our recommendation right now to publishers is to start that experimentation and that dialogue with your consumers to find out where the tolerance areas lie,” Cunningham said. “There’s a whole matrix of different options that publishers can do in between these two things [doing nothing and completely hiding content from ad-blocked users] to get consumers to engage.”

Reasons to be hopeful

Cunningham said the IAB is also working to make ads better for consumers — he pointed to the organization’s guidelines around HTML5 advertising, which he described as “the beginning of a path” to a better user experience.

Kargman and Spanfeller suggested other ways the industry could improve. For his part, Kargman put much of the blame on advertisers’ new obsession with whether an ad actually gets seen. Seems like a valid concern, right? Well, Kargman suggested that as advertisers pushed for improved viewability, they ended up with ads that got flashier and intrusive.

So in his view, the industry needs to find better ways (in his parlance, better currency) to evaluate ad effectiveness.

“In advertising, because the market is shifting so rapidly, we’re using almost outdated currency,” he said. “That currency really should reflect the quality of the environment the ad runs in, how brand safe it is, the quality of the content on the page, how well the ad is integrated onto the page and, obviously, how much the consumer engages with the ad.”

Are people pissed when they walk into a store and they don’t get a car for free? Jim Spanfeller, Spanfeller Media Group

Spanfeller, on the other hand, pointed to the proliferation of programmatic ad tech and third-party data. When every ad is supposed to be targeted algorithmically, drawing on different types of user data, you end up with “60 or 70 cookies on every page.” Much of that data, he argued, isn’t really making the ads more effective, so perhaps it’s time to cut back.

A change is gonna come

Will any of these improvements happen? Maybe not, but at least people are making the right gestures. And regardless of how you feel about ad blockers, there’s no denying that they’ve changed the conversation.

The challenge will be in finding a middle ground that publishers, advertisers and consumers can live with — and in the meantime, publishers have to survive. That’s something I was particularly curious about in my conversation with Williams: How would he feel if ad blocking ends up killing websites that he admires?

“Of course, I wouldn’t pin the blame on ad blocking, I would put it on the fact that there are bad ads out there,” he said. “I hope it’s not such a slow process. … It probably won’t happen overnight, but we can already start to make very positive changes now.”

Hey, if things do get better, consider turning off that ad blocker, okay? Otherwise I might have to start looking for a real job.