Facebook is finally coming to the Apple Watch in the form of a Messenger app that allows users to send text messages, audio messages, and share their location. The ability to simply talk to Messenger, and have friends be able to listen to that message, will allow for unprescedented hands-free chat over Facebook.

The app was announced on-stage at Apple’s big “Hey, Siri” launch event that we’re liveblogging. The announcement came alongside the unveiling of the new gold and rose gold Apple Watch Sport, more colored sport bands, and details of watchOS 2 that’s in beta. It offers apps that run native on the watch, new faces, and third-party complications, public Transit in Maps. There are also a few new flagship apps for the Apple Watch, including GoPro, iTranslate, and a health care provider app called AirStrip. 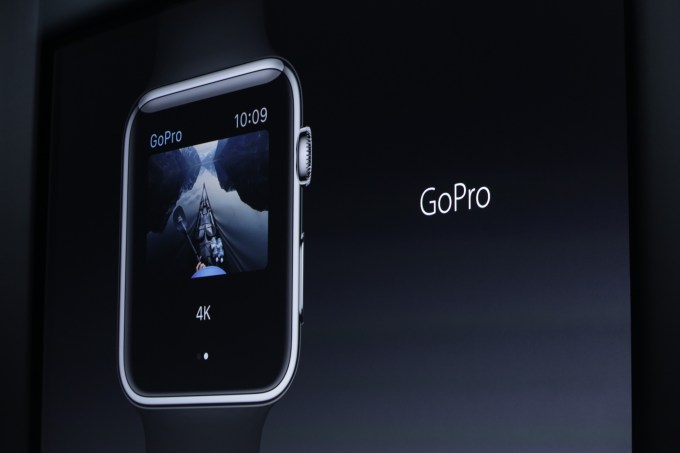 But the most exciting new software is Messenger. With 700 million monthly users globally, Facebook Messenger is the biggest US messaging app outside of SMS. It could turn the Apple Watch into a more serious communication device, rather than something you just stare at.

Facebook didn’t release an app alongside the original launch of the Apple Watch, which was a surprise to some. Cramming the News Feed into the tiny screen didn’t seem to make sense, though Instagram did offer a way to view its photos on the Apple Watch.

In the meantime, 10,000 other Apple Watch apps launched. Startups like Voxer, Glide, and Telegram swooped in, hoping to be people’s wrist messaging app.

But now Facebook seems to believe its got a smartwatch app worthy of its name. Not shown on stage were these screenshots, just shared by Facebook Messenger’s head honcho David Marcus. They show off group messages, audio messages and location sharing, a sticker search engine, and stickers. 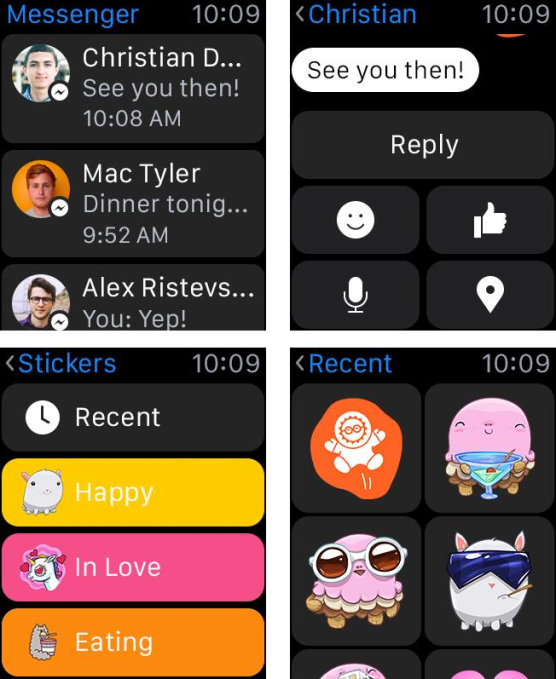 Facebook tells me “With Messenger for Apple Watch, people have a new way to stay connected with those they care about, by sending and receiving voice clips, Likes, stickers and more. We’re excited about the launch of Messenger for this platform and look forward to hearing people’s feedback.”

The app will let users send pre-made text editable on the iPhone, Likes, voice clips, location, emoticons, and stickers. They can receive all those plus text, photos, and videos, and money, though stickers and GIFs will appear as still images.

Why Build For Apple Watch?

Facebook has been aggressive about accessibility, trying to make versions of its apps that work on as many platforms as possible. It even built a Google Glass app.

While it doesn’t monetize Messenger directly, the app drives lock-in with Facebook’s social network and News Feed, where it shows its lucrative ads.

The more platform ubiquity Facebook Messenger can achieve, the stronger its network effect will be entrenched. Each time a friend messages you from Facebook Messenger, it draws you closer to the Facebook ecosystem. Each time they text you from SMS or another app (other than WhatsApp), it pulls you further away. That’s why despite Apple Watch’s relatively small user base, being there is important for Facebook.