This jacket is going to need a lot more pockets to stuff all of the $$$ it’s raising.

With less than a day to go, Baubax‘s versatile travel jacket Kickstarter project is nearing almost $8.5 million in funds contributed from over 40k backers, making it the most well-funded clothing project in crowdfunding history, according to the site.

The jacket aims to simplify the traveling process through hosting pockets and compartments that keep all your items within easy access while also giving you accessories like a neck pillow and eye mask built-in to the clothing’s lining.

Some of the features seem a little too MacGyverish in their goofy utility, but as far as a jacket that looks nice and has some other handy features sewed in, it’s clear to see why these products have been successful. 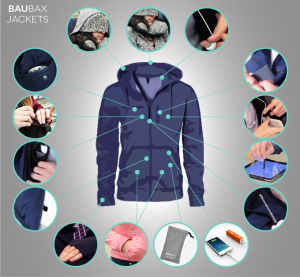 The jacket, which comes in men’s and women’s varieties of sweatshirt, windbreaker, bomber and blazer fittings, is a smash hit on the crowdfunding site and has largely sold out of many of the cheapest rewards, but backers keep flocking to the project and are still paying a pretty penny for the apparel.

For the next 16 hours, you can get the cheapest model of the jacket, the BauBax Sweatshirt for $129, while the more expensive Blazer goes for a cool $149.