Mobile messenger Line has unleashed its latest standalone app, a location-sharing service called Line Here. Line users can already share their location in chats, but Line Here extends that service to people who haven’t downloaded the messaging app by letting them sign up with a Facebook account if they don’t have a Line ID.

Line Here is now available for Android and iOS in all countries except for South Korea and China. Once in the app, users create location sharing rooms, which they share with other people by sending them a URL through Line, Facebook, or SMS that prompts them to download the app. Line Here tracks user’s movements on a map, but (like other location sharing apps, including Glympse and Jink, ) it also has an optional timer for location-sharing rooms so members can’t stalk each other in perpetuity.

Up to 200 people are allowed in each Line Here location-sharing room. Coincidentally (or not) that is the number of people allowed in group chats on Popcorn Buzz, Line’s app for raging extroverts (or businesses that have not yet managed to download one of the many other conference calling services out there). 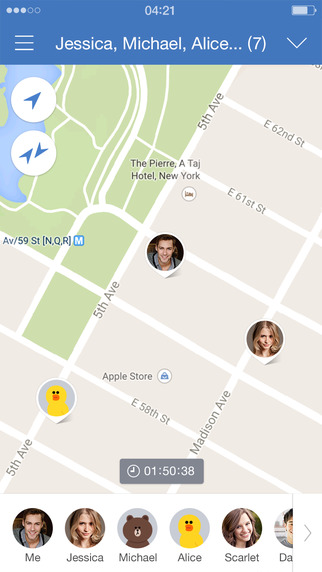 Line Here joins Popcorn Buzz, the aptly named Emoji Keyboard, the less aptly named photo app Aillis, and streaming service Line Music in the company’s increasingly large roster of standalone apps. It might seem strange for Line to keep making apps that already have plenty of established rivals before they are even released, but it is a way for the company to attract users and collect data in countries where it lags behind other messaging apps.

Line is the top messenger in Japan, Thailand, and Taiwan, but it is still struggling to compete with Facebook Messenger, Kik, Snapchat, and WhatsApp in the U.S. and Europe. Apps like Line Here and Line Tools (a utility toolbox that includes a ruler and clothing size tables) may not be especially exciting, but they help diversify Line’s products and build its Line’s brand recognition (for example, Line Here is plastered with Line’s signature cartoon characters). It can also help the company figure out what services to integrate as it turns its main messaging app into a mobile services platform.

Line Here faces an uphill battle for users, however, since it not only competes with similar apps like Glympse and Jink, but location-sharing features in iMessage, Facebook Messenger, WeChat, WhatsApp, Google Maps, and many other apps.