Snapchat is courting teenagers around the world who want to save their data plans with a new travel mode. When enabled, Snaps, Stories and Discovery content will only load if users tap them, rather than loading automatically when they open the app.

Travel Mode comes alongside several other new features for iOS and Android. Now users will be able to add as many emoji to their snaps as they want and place them individually, rather than having to add them as a rigid single string of text. The eye button for jumping from your Story to who watched it is coming back after a short absence.

And you can now export and download your profile GIF as a video rather than just a photo of the first frame. While few have talked about it, the profile GIF is the only piece of content in Snapchat that’s not ephemeral, and the first semblance of a “profile” for users on the app. It comes in handy when trying to decide whether to follow someone back.

How To Use Travel Mode And Placeable Emojis 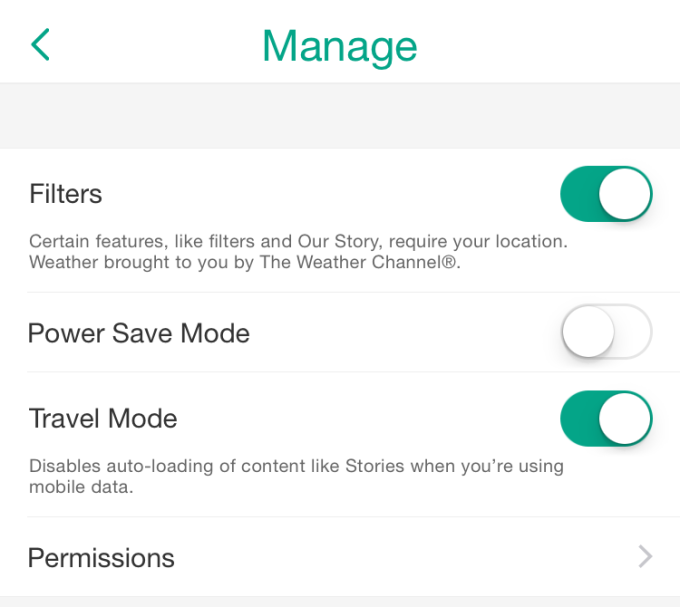 To activate Travel Mode, users must tap the Snapchat icon at the top of the camera, go into their Settings, open Manage Additional Services, and then toggle it on. While it’s called Travel Mode presumably because it could help people avoid expensive roaming charges while away from their country, it will more likely be a hit with people on small data plans at home.

As for the new emoji option, users will tap the post-it note button in the top right of their screen after they’ve shot a snap. Then they can add as many emojis as they want, and drag and resize them to their liking.

The data-saving move mirrors attempts by Facebook and other startups to provide a cheaper way to access their services. Teens around the world, as well as many smartphone users in developing nations where data is expensive relative to buying power, have to aggressively manage their data usage. Otherwise, they could run out and have to stop using the Internet, or pay overage charges they can’t afford.

To avoid this, tech companies are condensing their apps so they are smaller and less expensive to download, and looking for ways to condense their transmissions and improve efficiency so their apps use less data. Facebook released a special data-saving version of its Android app called Facebook Lite.

Now Snapchat users can volunteer to only use data on what they want to see. They might spend more time waiting for Snaps to load because they haven’t been pre-loaded, but it’s a small price in time to pay compared to actually being charged money.

Snapchat recently said it’s reached 100 million daily users, and that 60 percent of young Americans are users. But it’s poised for an uptick in growth around the world thanks to several recent changes. It dropped the thumb-tiring tap-and-hold-to-view mechanic so you can now watch Stories with just a single touch. A quiet but major engineering update has made Snaps and Stories load much faster. And now it has Travel Mode.

When Facebook started to reach saturation in its primary markets, it ramped up its investment in localization and data compression to attract users abroad. Now it’s Snapchat’s international moment.

For a demo of the new features, add me on Snapchat at “JoshConstine” and follow “TechCrunch” for behind-the-scenes tech news