A testament to the strength of Second Measure (YC S15) and their data analysis product is the fact that, after backing the company, Y Combinator was so impressed that they became paid users of the product themselves and are now using it to help inform their own future investments.

Second Measure delivers such effective analysis by inspecting billions of credit card transactions (more than 1 percent of all U.S. consumer spending) and presenting detailed insights to investors and analysts through their products.

“We can see pretty much real-time performance of public and private companies,” said Mike Babineau, co-founder of Second Measure. “For example, we can show an investor how many subscribers Netflix had this month or how Uber is doing relative to Lyft.”

Second Measure has two products: a web application that they are targeting more towards analysts and a data feed that they make available to researchers. The company currently tracks about 400 companies, but is looking to soon expand to “thousands.”

The data, which the company receives from a “variety of strategic partners” (they declined to get more specific), appears incredibly rich and allows for deep comparative analysis.

As a note on the privacy front, co-founder Lillian Chou specified that all of the credit card data is stripped of identifying information when Second Measure receives it. 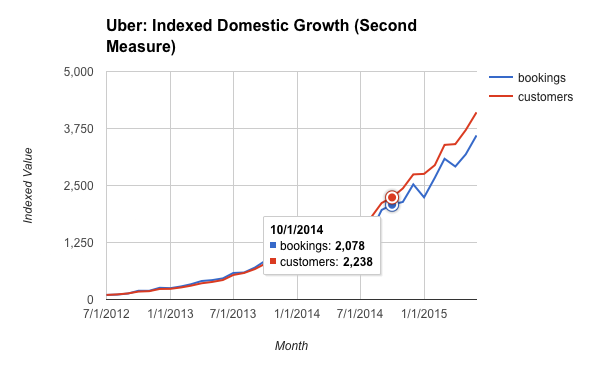 A sample of Uber ride-sharing data from Second Measure.

Babineau and Chou showed me a demo of the product, comparing a couple of ride-sharing companies, and the analysis presented by the web application seemed pretty game-changing (check out some of the Uber data on this company blog post).

Through Second Measure, investors can dig through operational metrics like revenue and customer growth, retention and cohort analysis, while also benchmarking companies against their competitors to track overall market penetration.

The company is focusing its offering “primarily towards VCs and hedge funds,” according to Babineau, and it’s pretty easy to see why the product would be attractive to them.

Right now, venture capitalists are primarily scouring Second Measure’s product to identify fast-growing companies, and hedge funds are using it to “inform their financial models” and anticipate the earnings releases of public companies.

Babineau and Chou believe that many other investors just aren’t utilizing the available complex pools of data to effectively inform their decisions, largely because of limits in access.

“There are all of these new and interesting large-scale data sets out there that are really valuable,” Babineau said. “But these investors aren’t in a position to use them because they don’t have data or engineering teams, that’s where Second Measure is really trying to bridge the gap.”