The idea of the American Dream started as early as the Declaration of Independence with “all men are created equal.”

It traveled from The Autobiography of Benjamin Franklin, up the Mississippi River with Huckleberry Finn, into the heart of New York City in a yellow sports car driven by J. Gatsby, and back to the kitchen table in The Death of a Salesman.

In The Epic of America, written in 1931 by James Truslow Adams, he stated that the American Dream is:

that dream of a land in which life should be better and richer and fuller for everyone, with opportunity for each according to ability or achievement. It is a difficult dream for the European upper classes to interpret adequately, and too many of us ourselves have grown weary and mistrustful of it. It is not a dream of motor cars and high wages merely, but a dream of social order in which each man and each woman shall be able to attain to the fullest stature of which they are innately capable, and be recognized by others for what they are, regardless of the fortuitous circumstances of birth or position.

As time passed from the roaring 20s into the depression and the baby boom in the latter half of the 20th Century, the salt of the American Dream dissipated. And that’s only operating under the assumption that it ever really existed.

If all men are created equal, how did the American Dream thrive throughout the country’s shameful period of slavery and before suffrage? And even now, with strides towards equality getting bigger by the day, how is it possible that one of the fastest growing and most culturally important industries is falling behind?

Was the American Dream always a tool of fiction? An incentive, or more realistically, a lie masquerading as fair opportunity?

Today at the White House’s first Demo Day, President Barack Obama, the nation’s first black president, spoke with various startups about their founding stories. This comes a little over a month after SCOTUS legalized same-sex marriage across the nation. Progress is underway, undoubtedly.

As part of the Demo Day, 90 entrepreneurs from over 30 different companies had a chance to share their entrepreneurial story. But, this wasn’t a typical Silicon Valley Demo Day where startup founders got up on stage and pitched to an audience full of press and potential investors. Instead, the “Demo Day” went down in some random hallway in the West Wing, where U.S. Chief Technology Officer Megan Smith and FUBU Founder and CEO Daymond John had short, five-minute conversations with the founders. There were anywhere between 1,400 to 1,500 people watching the livestream at any one time. I guess that’s better than nothing.

This is what it looked like. It was strange. 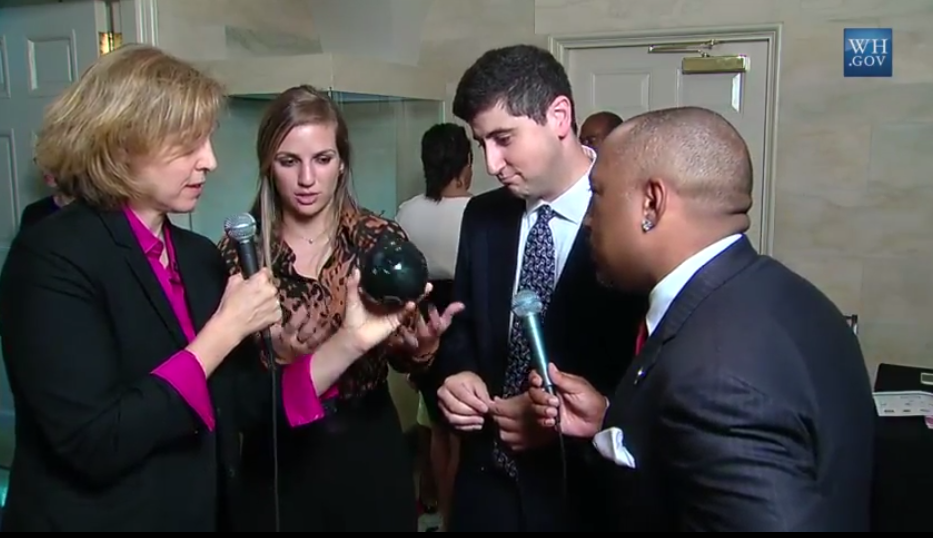 After the pitches, Obama walked around the exhibition area to meet with founders from a handful of startups including Duolingo, Base Directory and Partpic. This is where startups had a chance to truly demo their products. According to Smith, who this morning spoke to the press on a call previewing this afternoon’s event, only three percent of venture capital-backed startups are run by women and only one percent of those companies are led by African Americans. From the VC perspective, only four percent of US-based venture capitalists are women.

That said, the purpose of today’s Demo Day, which includes well-known companies like Duolingo and Disrupt Battlefield participant PartPic, is to foster inclusion in the tech space.

According to the call, these companies were selected specifically because they, in some way, represent diversity in entrepreneurship and have been asked to share their formation story, both trials and triumphs, so that others can follow the example.

At the Demo Day, the president announced 116 new winners of the total Small Business Administration prize. In 2015, $4 million was set aside for winners of this prize, who usually receive $50,000 individually. Past winners from the 2014 Growth Accelerator Fund created or sustained more than 5,000 jobs and raised more than $500 million.

On the public side of things, the administration has been working with over 40 venture capital firms (including but not limited to A16Z, Intel Capital, Kleiner Perkins Caufield Byers, and Scale Venture Partners) that collectively have more than $100 billion under management, and are committing to new hiring practices that advance opportunities for minorities.

Avoiding specific targets, goals, or requirements, the initiative will focus on the Rooney Rule (first adopted by the NFL), which states that any senior position should not be filled without at least one minority candidate. The Rooney Rule was first enacted in 2003 for the NFL, before which there had only been seven minority coaches working in the league. Today, 12.5 percent of NFL head coaches are minorities. Originally meant to improve representation of African-Americans in head coaching jobs, in June 2009 the rule was expanded to include all ethnic minorities.

Even without specific quotas, the Rooney Rule seems to have catalyzed improvements in diversity in the NFL, and hopefully the tech sector will follow.

Silicon Valley and the U.S. government haven’t always seen eye to eye. In November 2013, the U.S. Food and Drug Administration ordered human genome startup 23andMe to stop selling its at-home DNA testing kits. More than a year later, the FDA made a significant ruling that 23andMe could begin selling kits for the genetic testing of a rare recessive gene disorder called Bloom Syndrome. Back in March, the government was reportedly frustrated with Silicon Valley tech companies for not obtaining U.S. security clearances for enough of their top executives. Those clearances would enable the government to talk openly with tech executives about cybersecurity intelligence, and potential hacks or other security issues.  And just last month, British Prime Minister David Cameron called out the tech industry for not doing enough to fight terrorism. With all of that in mind, it’s interesting to see the U.S government and high-profile Silicon Valley companies and VC firms working together so closely on diversity in tech initiatives.

Tech inevitably paves the way for our nation’s future — more than all other industries. If the tech industry cannot lead when it comes to equality, especially in the midst of an unprecedented entrepreneurial revival, we may not be any better than the misogynist and racist characters featured in 1920s American literature. If the tech industry and the U.S. government can effectively work together, the American Dream actually poses a chance at becoming a reality.