Editor’s note: This is a Q&A between attorneys Beth Ferrill and Lauren Dreyer of Finnegan, and UX/UI designers Erik Dreyer of GoodShuffle and John Sanchez of Academy.

User experience and user-interface design is an emerging field in the technology industry, even more so in the legal world of patents. (Sometimes this field is known by the shorthand UX/UI.) It might surprise you to know that the fastest growing segment of design patent filings is in the UX/UI space.

In the past, companies that manufactured a physical object, like a sneaker, often protected their designs with design patents. For a company like Nike, design-patent protection is important to preventing competitors from copying their shoe designs. But, the same is true for companies invested in UX/UI.

The surge in UX/UI design has created iconic features that cause consumers to immediately associate a design with a particular brand. From cell phones to remote controls, gaming devices to virtual reality headsets, modern products are carefully designed with the user in mind.

Because a product’s success often depends upon these creative design choices, protecting the design is critically important to differentiating your product from a competitor’s product.

Some of the top filers of UX/UI design patents include Samsung, Microsoft and Apple. With more and more innovation happening in non-traditional digital spaces, like wearables, smart watches and even home appliances, user interfaces and experiences are becoming a key segment of a company’s overall brand and should be considered part of their overall IP portfolio. This is true for established companies and startups.

Nonetheless, there remains some skepticism and misconceptions about design protection in the UX/UI area. We all sat down to talk about why design patents matter for UX/UI.

Beth: Erik, let’s just get this out there; it isn’t any coincidence that you and Lauren both have the last name Dreyer, right?

Erik: No, it’s not. We are married, which is how I learned about this topic in the first place. But, this also seemed like a great format for me to grill my wife about her work and to get some of my questions answered.

Erik: So what is a UX/UI design patent anyways?

Beth: A design patent keeps others from using graphical user interfaces (GUIs), online icons or other UX/UI features that are substantially similar to the design in your patent. GUI design patents are either static (not moving) or animated (moving).

Design patents covering animated icons or interfaces are much less common than those covering static designs. An animated design patent is basically a series of images with elements that appear to “move” when viewed — much like a cartoon flip-book. For instance, Apple has a design patent for its page-turning animation:

It is important to understand that this design patent doesn’t cover “turning” any page, but rather the appearance of Apple’s design in turning a page. Here is another animated design patent from a start-up named Quixey, whose app promises to help users search for new apps in Google Play. This example shows the “flip book” idea: 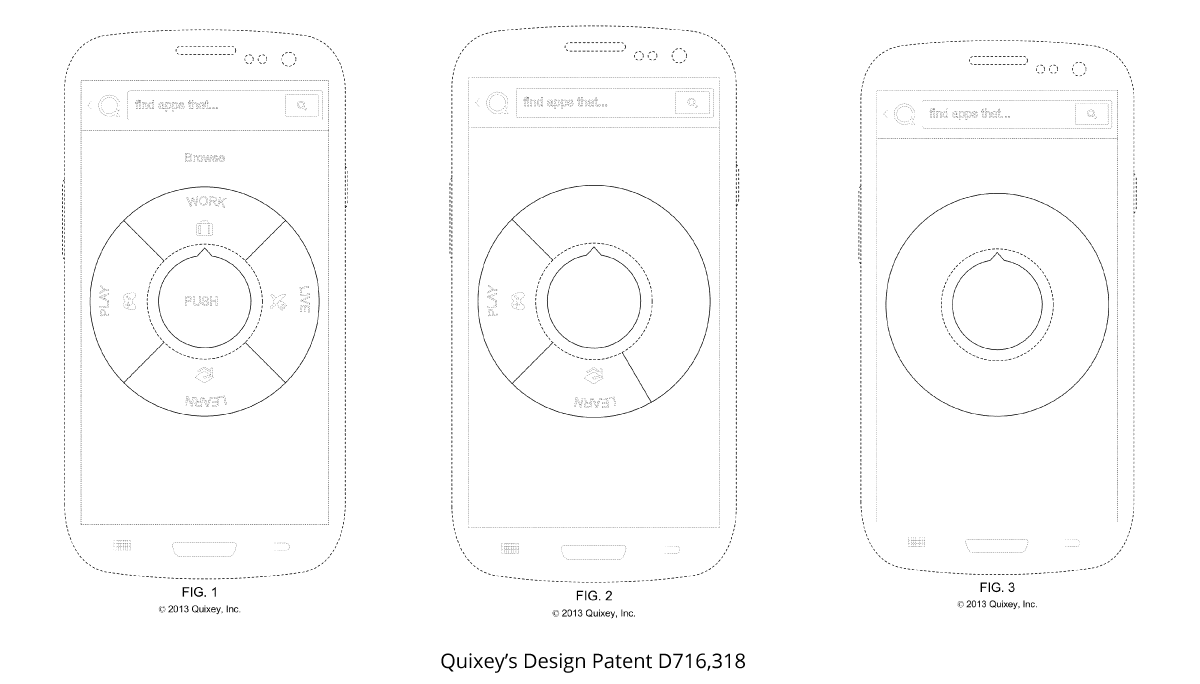 John: Hmmm. Sounds interesting. What are the requirements to get a design patent?

Lauren: Like all patents, design patents are only granted for designs that are new and not obvious versions of existing designs. While the underlying article must have a function (meaning it isn’t a piece of artwork), the design patent protects the ornamental aspects of the design — meaning the design cannot be solely dictated by function.

But UX/UI is all about function, right? Not necessarily. A good indicator as to whether a design meets this test is when there are alternative designs that can provide the same function. For example, there are many different ornamental designs for the shape of a smartphone or a beer bottle. Likewise, a UX/UI design patent would cover the aesthetic, as opposed to the specific functionality, of the experience. Let’s use Nest Labs’ digital thermostat as an example. 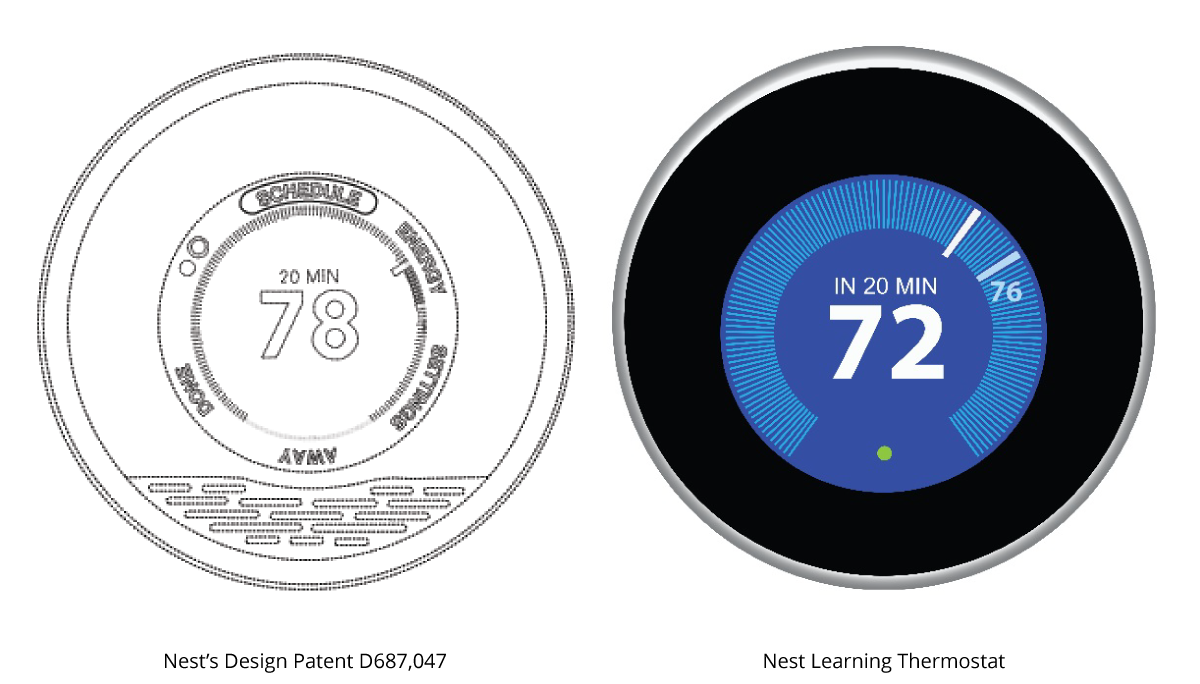 Although the digital thermostat comes with loads of functionality, Nest obtained a design patent on the look-and-feel of the circular display with the rotating clock-like controls. And there are, of course, many alternative ways that Nest could have displayed and oriented its thermostat.

For example, traditional thermostats are usually rectangular with push buttons and another rectangular display face. Because alternative designs provide the same functionality (controlling the temperature), Nest’s design can qualify as subject matter for a design patent.

John: Are there limitations to what can be patented? For example, I saw this cool CSS3 animation that I want to put my own spin on. But, the original animation isn’t mine. Can I patent that?

Lauren: You can certainly add your own design features to something that already exists. Most designs do just that! As long as your design is new, contains a non-obvious change from the existing design and covers ornamental aspects, you may be able to get a design patent on it. During examination, the key issue will be if your new design features are different enough from the existing design (known as the “prior art”) to get over the non-obviousness hurdle.

Erik: Is there a minimum level of sophistication, complexity, innovativeness, level of research and development, etc. to get a design patent?

Beth: New and not obvious are the primary guidelines. Additional complexity in your design might ultimately make it easier to overcome prior art designs during the examination, but this is a double-edge sword. This additional complexity could also make later enforcement of the design more difficult, because the added complexity makes it is less likely that a competitor’s design will be deemed to infringe (meaning that the two designs have substantially the same overall visual impression).

Of course, another thing to remember is that you may wish to change your commercial product and you would probably still like your design patent to cover new versions, as well. So you should try to focus on patenting the underlying, fundamental elements of your UX/UI, and not focus on minor elements that you might change in the future.

The most important features of your design patent application are the drawings. The U.S. Patent Office will look at your drawings carefully — to make sure they are clear and consistent with each other — in deciding whether the design is new and not an obvious variant over existing designs.

And the U.S. Patent Office can be picky about UX/UI drawings — changing them after you file can be difficult, if not impossible. Your UX/UI design application may be a one-shot attempt, meaning it is critical to get the drawings right on the first go-round.

John: How do you patent a user experience if experiences are shaped by a number of variables, such as time of day, weather, user emotions, etc.?

Focus on the way the user interacts with the design and how the user expects the design to respond. If the interface changes so dramatically that there isn’t much of a consistent design, it is possible to procure multiple design patents on the same product.

Because a design patent can claim an innovative sub-part of a design (in addition to the whole thing), designers often find it useful to get more than one design patent per product — covering different sub-aspects or iterations of a single product.

Luckily, design patents typically cost a fraction of the cost of utility patents. And, on average, it takes only 15-18 months from the time you file it to the time it gets approved by the U.S. Patent Office (compared to the 3-5 years it can take to get a utility patent approved). So it is often a viable option to have multiple design patents based on a single UX/UI.

Erik: How do I know if something I am about to design or develop is patented?

Lauren: All U.S. design patents are made public and searchable on the U.S. Patent Office’s website. Before investing the resources to obtain a design patent, consider searching for existing patents that claim similar designs. Some companies search for similar patented designs before even developing their user interfaces.

It might not be your common practice, but if you have created something innovative, or if your product solely relies on that innovation as its key selling point, then do your research and make sure you are not building something that has already been built.

John: How often are current design patents enforced? Are they only enforced by corporations against other corporation, or do they attack the small agencies, too?

Beth: Many disputes over design patents are simply settled without court involvement. Sometimes, just a letter telling a competitor about the patented design and offering a license, or suggesting the company adopt a different look, will cause the competitor to adopt a new design.

In fact, many design patent holders report that they rarely resort to filing a lawsuit to enforce their rights. When the would-be infringer is a small company, it may make more financial sense for the patent holder to send notice of their patent rights, which is often sufficient for the competitor to move in a different direction. Of course, sometimes companies sue each other, as we saw in the Apple v. Samsung case, but that is an outlier.

John: If patents aren’t enforced often, why bother applying for one?

Beth: They are enforced, just not always through a lawsuit, as some patent holders find it more effective to mark their products with their patent numbers or send notice letters to competitors. Some companies enjoy a layer of protection just by becoming “known” as a company that uses intellectual property to protect its products.

Patents can also add value to your products, because intellectual property rights may attract investors. Patents can also serve as defensive tools. If another patent holder accuses your company of infringement, you can more easily prove you are practicing your own patented invention, not theirs.

Lauren: U.S. law allows the patent owner to keep others from using a substantially similar design to what is covered by the design patent. And this makes sense. Patent protection exists so that an inventor who has invested time and financial resources in developing an invention or design can recover those costs.

In addition, the public benefits when competitors must innovate new designs that venture in a different direction to avoid infringing on an inventor’s rights. Such innovation provides the public with a new (and hopefully better) choice of design and user experience. 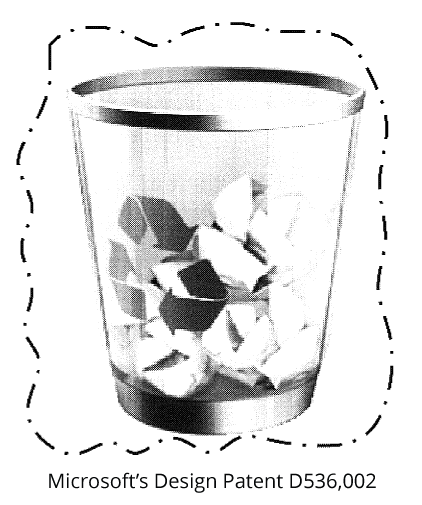 It is just that the other recycle bin icons simply cannot adopt substantially the same overall ornamental design as Microsoft’s recycle bin. And just look at some of the many recycle bin designs that UX/UI designers have created:

John: If I think my design is worthy of one, what is the incentive for me to apply for a design patent?

Beth: If your UX/UI is innovative and you think that it differentiates you from others, consider ways to patent it. Especially if you have invested money to develop your design and you would like to keep others from copying it. Think about the key features that help you associate a product with a company’s brand: Apple’s slide-to-unlock feature or Microsoft’s Windows 8 tiled home screen. 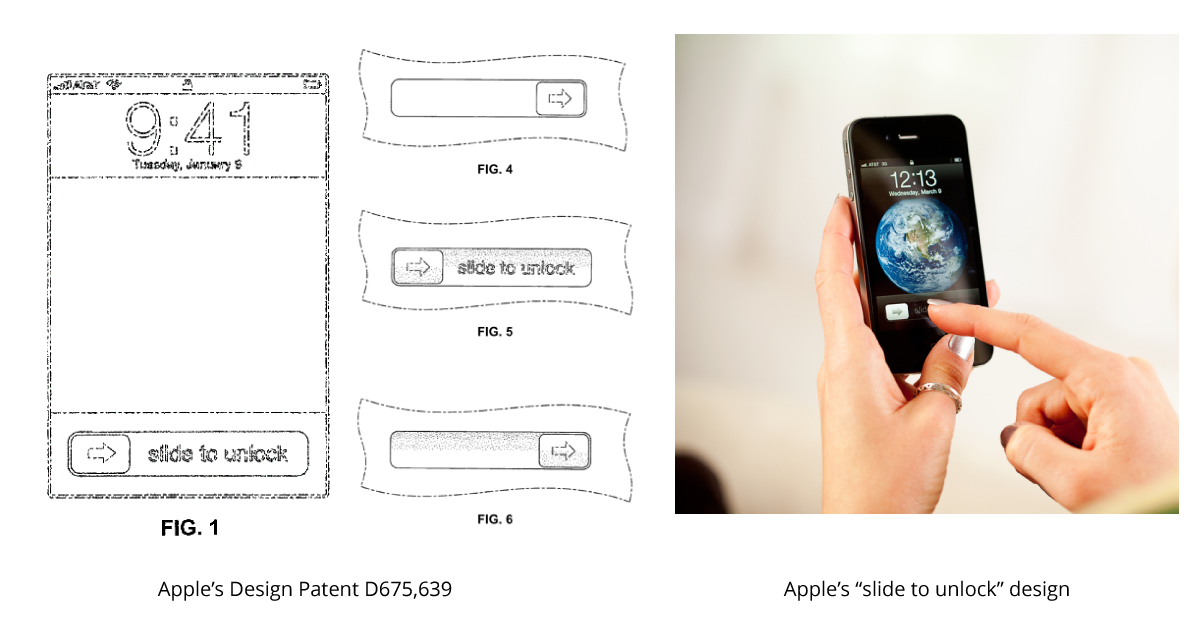 These designs are often a company’s lifeline. Considerable thought is put into the UX/UI so that the company can differentiate the product among competitors. Identify those designs that your company thinks are particularly innovative and iconic. Although intellectual property can sometimes be an expensive investment, design patents are usually considerably cheaper and provide some great protection.