Michael Lopp’s job at Pinterest is to basically make sure he doesn’t have anything to do all day.

Of course, that isn’t the case. As head of the company’s engineering efforts, Lopp, a compulsive counter who has been at Pinterest for a year and 30 days, has to ensure like the rest of the leadership that all of the teams building Pinterest are meshing and that he can effectively delegate certain tasks.

“It’s gonna sound like I’m lazy but I swear I’m not lazy,” he says. “My job is to get myself out of a job. I’m aggressively pushing things I think I could be really good at and should actually maybe own to someone else who’s gonna get a ‘B’ at it. But they’re gonna get the opportunity to go do that [and continue to learn in the process]. My job is to — it sounds like I just want to sit here and drink coffee and talk about bread — but it’s about pushing it down, so these things, which naturally come to me [go to others in the company].”

Pinterest is at an interesting time in its life. Earlier this year, the company ran an experiment called Jumpstart — where it sent a team to Japan to improve the local versions of the product in a short period of time. Pinterest also began opening up its development platform and, of course, has continued to build additional tools for marketers. He describes Pinterest as a “nice” company.

Before joining, he was added to an email thread where he unexpectedly saw nearly a hundred “thank yous.” It’s pretty different from Palantir, he says, which was engineering-driven, while Pinterest is a confluence of multiple different roles working together at the same level.

The success of Pinterest’s continuing expansion depends on its teams, which consist of designers, product managers and engineers. Much of Lopp’s job involves ensuring that those teams mesh well.

He has to ensure that the company grows, monetizes and continues to drive additional engagement, which requires that each team functions at a high level despite differences in opinion and specialities. That triangle inevitably creates a feedback loop: better engagement and growth leads to better monetization, which allows Pinterest to re-invest in the other two, and so on and so forth.

Lopp’s story behind joining Pinterest isn’t dissimilar to that of joining Apple. While at a bar with the CEO of a startup he worked at during the middle of the dot-com bust, he got a call from a recruiter that asked him if he wanted to work at Apple.

“I went to do it to hide for like three years. To wait until the nuclear winter was over.” It turned out to be one of the most successful parts of his career, and after working there for more than eight years he left to head up engineering at Palantir, where he remained for just over four years. 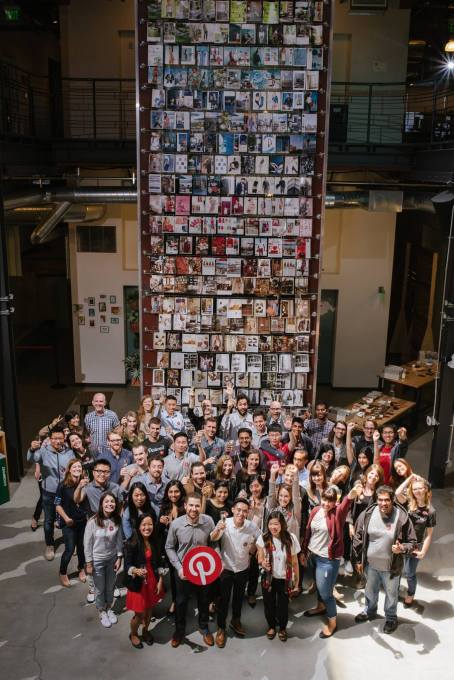 Then, while visiting Palantir’s offices in Australia, he got another call. Aubrey Obata Kendall, head of recruiting at Pinterest, explained that the company had a “Lopp-shaped hole” at the company, he said. Wanting to run engineering at a consumer Internet company, Lopp decided to take the job.

Lopp tells me he wanted to work at company driven by product. Pinterest, in addition to being a consumer company, is also a product “for regular humans,” he says. While CEO Ben Silbermann handles the company’s strategy and co-founder Evan Sharp is the design voice of Pinterest, the company still needed a strong engineering voice. Enter Lopp.

“I’m at the perfect cross-section of where I’m at in my career and what this job wants,” he says. “This is the first time I feel like what I’m doing and the experience I’ve had is perfectly, exactly what Pinterest needs. It’s the culture-building piece. The other piece here is I’m all about the humans.”

Still, most of his time is spent in meetings, with about a third of his time in one-on-one sessions with other team members, and about a third in program meetings. And he still keeps up with his coding: he learned Swift, Apple’s new programming language, during a Pinterest hack week earlier this year. “The engineers can smell it,” he says, if someone doesn’t have coding expertise.

“This is my job. I spend 80 to 90 percent of my time dealing with how it all fits together. It’s a perfect set of problems I’m pretty good at. I mean challenges. Opportunities — not problems.”

He still takes time to himself — whether that’s a short amount of time to write columns (he’s a prolific writer on his personal blog, Rands in Repose) — and of course advises everyone else to do that (and also take vacation).

“Busy is a bug, not a feature. Whenever I see myself in that state I do a system analysis: How do I get this in this state,” he says. “I like being busy — there’s this thing about busy that feels nice. But that’s actually your ego messing with you, and you’re probably failing in something. Whenever I feel that there, I do a lot of system analysis. Why is this here? Can I delegate it? This is what I was doing in Japan.”

The engineering teams are designed to be small and agile, but Lopp’s impact can also be seen at the recruiting level. While at Pinterest, he began actively pushing to hire new graduates instead of just those with experience. The company’s incoming class consists of 60 newly graduated engineering employees and 71 engineering interns. There’s also a “bartender” program where managers are excluded from the hiring process — so there isn’t pressure to simply fill a spot, with specific people trained to be good interviewers in the hiring process instead.

And then there’s the diversity question. Of the incoming class, one-third of the new hires and interns are women, and having that kind of diversity inevitably helps dissolve “groupthink” among engineering groups, Lopp says.

“Engineers are skeptics, so I took some time to present the research, and there’s a bunch about why teams that are more diverse, companies that have women in executive positions, are more successful.”

Lopp, a bit of a gamer, tends to stay out of the spotlight in games like World of Warcraft. That’s not entirely a surprise — his job at times is to take a step back, look at the whole picture, figure out how to place the right chess pieces and step in where necessary in order to ensure that the operation continues running smoothly.

Like working with humans in real life, organizing a big group of people who are volunteering their time in a video game is a bit like herding cats. (Though, to be fair, at a company like Pinterest they are being paid for their time.)

“It’s not 1,000, but it’ll be [there] before you know it, and we’re getting to another Dunbar’s number in terms of process and overheard,” he says. “But I’ve gone through this a couple times, so I have some ideas on how to build it. The problem I’m working on now is how do we take all of the things they need to do and put it in the golden list. We’ve been growing so quickly, we’ve started to silo a bit in those worlds, and my job because I’m a Silicon Valley tech person, is to how do I keep those [teams working together], support their different missions, have a platform to design all of them.”