UpCounsel, a marketplace for legal services, has pulled in $10 million in new funding to provide small businesses with attorneys at a fraction of the cost of a big law firm.

Menlo Ventures led the Series A round, with participation from previous investors Homebrew and Metamorphic Ventures, which brings the company’s funding total to $13.9 million.

When businesses hire a lawyer from a top firm, the majority of the legal fees they pay are not going directly to the attorney doing the work, according to UpCounsel co-founder and CEO Matt Faustman, who previously worked as an attorney at international law firm Latham & Watkins.

“Say I bill $300 per hour as a first-year associate,” Faustman says. “I only see $100 of that, because a third is built up in overhead and another third goes to partner pay.”

By eliminating the partner pool and reducing overhead costs with its free practice management software, UpCounsel charges clients a third of what a major law firm would charge, on average, while their attorneys bring in a comparable salary.

For the 300 attorneys currently using UpCounsel, the company’s software handles scheduling, payments, document organization and marketing. In the future, Faustman says UpCounsel plans to roll out additional services for independent lawyers, such as providing malpractice insurance. 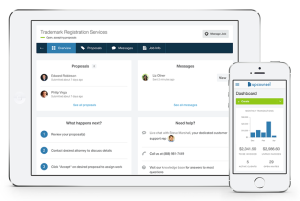 Over 10,000 lawyers have registered for UpCounsel, but the company is carefully vetting and accepting a limited number every month to maintain a high level of quality. Faustman says that the average UpCounsel attorney has around 15 years of legal experience.

Currently, UpCounsel is focused on providing day-to-day legal services, such as commercial contracts, patents, and employment agreements, rather than handling massive litigation.

Surprisingly, a number of big law firms are also using UpCounsel to find ad-hoc staff in areas where they don’t have expertise.

“Hopefully we become the default place for businesses to find lawyers, as well as the infrastructure layer for this new solo entrepreneur lawyer,” says Faustman. “If they can easily manage all of the stuff that goes along with being an independent contractor, then they can just focus on the work.”