How much do mobile users hate interstitial screens blocking their mobile browsing by urging them to down the native app instead? An overwhelming amount, judging by a study conducted by Google in July last year. Well, that and common sense when you think about the contrast between the aim of mobile computing (speed, convenience) and the point of interstitials (slow, distract).

The ad giant has just blogged about the result of its study, saying it found almost two-thirds (69 per cent) of visitors served with an interstitial for its Google+ social service abandoned the page entirely — neither downloading the app, nor going on to visit the mobile website — attributing this to the added friction of serving mobile users with an interstitial.

On the flip-side, Google found that 9 per cent of the visits to the Google+ interstitial page resulted in the ‘Get App’ button being pressed. And while that might sound crazy high (vs online ad click rates, for instance) Google points out that a proportion of those who pressed ‘Get App’ would already have had the app installed. Or might have never followed through and downloaded it. So it’s a very diluted signal of success, at best.

Add to that, many mobile users may well have also simply hit the ‘Get App’ button in error, since those buttons tends to be a lot larger than the ‘continue to mobile site’ links. Ergo, the much larger proportion who immediately rage quit at the sight of the G+ interstitial speaks loudest here.

It’s worth noting that Google’s study was small scale, since the company was only looking at how an interstitial promoting the Google+ social service native app performed (and we don’t know how many people it surveyed). It may very well be the case that visitors really didn’t want the Google+ app specifically — and that Google+ itself is skewing the data. (Sadly Google is not offering comparative stats with, say, the Gmail app interstitial, so we can but speculate.)

It does say it ran a follow up experiment, switching the Google+ interstitial for what it calls a “Smart App Banner” — to continue promoting the native app in “a less intrusive way”. And — quelle surprise — this more softly, softly approach performed better, with Google noting that 1-day active users to the Google+ website increased by 17 per cent.

Meanwhile it says Google+ iOS native app installs were “mostly unaffected”, in its assessment — dropping two per cent. (Android users get Google+ preinstalled already, hence the iOS-only measure. That may also be another factor why such a large proportion of those served the native app ad got annoyed; after all, who would appreciate being nagged about an app by the same company that has already pre-installed that app on your phone?) 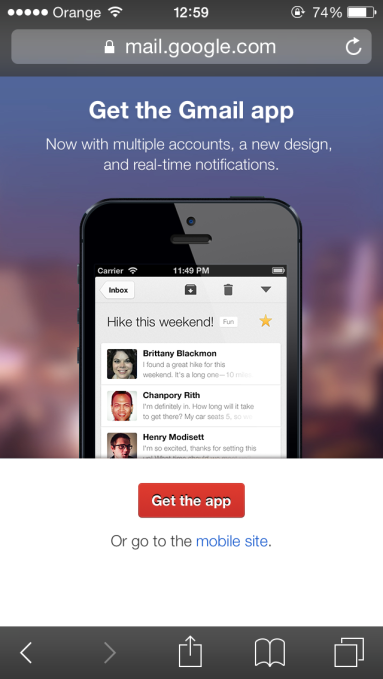 As a result of running the study, Google says it decided to permanently retire the Google+ interstitial. Although, sad to say, it has not ditched all its interstitials. For example, every time I am required to re-sign-in to the TC owner’s corporate Gmail on mobile to access my work email I still have an additional click standing in the way of the content I’m trying to access, being as Google always serves an interstitial (right) promoting the Gmail app. And, for corporate device management policy reasons, I can’t actually use the app and need to use the mobile site… So it’s pure, teeth-grinding time-wasting, every time I have to log back in.

Google’s G+ interstitial study is a teaser in terms of data it yields, but it highlights the continuing challenge of serving any kind of ad on mobile without radically annoying users. It also shows Google is looking for ways to reduce the “friction”, as it puts it, of mobile ads.

You’d expect the company to be thinking pro-actively about this, given its business model relies on ad clicks to power it. And it certainly won’t want the general shift from desktop to mobile computing to end up acting like an interstitial retarding the flow of its ad-based revenue stream.