The first thing I thought when I opened my Ringly box was that it smelled. Bad. Like electronics that had caught on fire and were then put out in some sort of chemical bath. But the company told me that the ring I received (an early review unit sent to reporters) was part of a bad “beta batch.” More recently, they replaced it with another. It didn’t smell nearly as bad.

But now my first thought was not of Ringly’s scent, or lack thereof, but whether a wearable device like this — one that alerts you to calls, texts, emails, app updates and more by way of lights and vibrations – has a place in an Apple Watch world.

While the Apple Watch’s overall usefulness is still hotly debated, the device easily fills the same role that Ringly does, while also offering the benefits of a health monitor and app platform. And it’s selling.

Though many popular app makers have yet to get on board with Apple’s wearable, it’s arguable that there doesn’t really need to be an Apple Watch app for everything. Instead, the Watch is at its best when it serves up timely, relevant and contextually aware information – like an incoming call, a text, a breaking news alert or notification about a sale at the store you’re now entering.

Likewise, Ringly also wants to be a tool you use as a way to stay on top of your most important notifications, while allowing you to finally stow your smartphone back in your purse where it belongs.

Founded in 2013, New York-based Ringly has been one of the better-known “smart jewelry” startups, and is backed by $6.1 million in venture funding from investors, including Andreessen Horowitz, Brooklyn Bridge Ventures, First Round, High Line Venture Partners, Mesa Ventures, PCH International, The Social+Capital Partnership and Highway1.

Sold online, the device has been designed to appeal specifically to women, whose needs had been largely ignored by the makers of other wearables, like smartwatches and health trackers, that, before, were often clunky, large, or simply not attractive enough to accompany the fashionable clothing choices that many women like to wear.

Ringly’s co-founder and CEO Christina Mercando, who previously worked as a Senior Product and Design Manager at eBay, said she came up with the idea when she realized that many women have a habit of keeping their phones in their purses, causing them to miss important calls and texts. 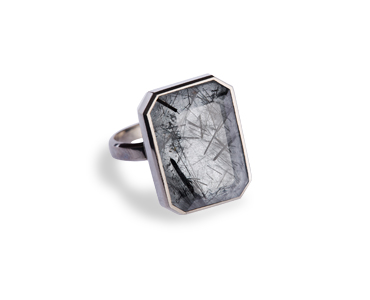 The device itself is like a piece of costume jewelry, and comes with different stones and band options.

I tested “Dive Bar,” pictured right, which is a rhodium-tone plated ring with a tourmalated quartz stone. Others are 18K matte gold plated with semi-precious stones. The company tells us it’s launching new finishes and stones, as well as other designs and collaborations in the future. An upcoming collection, for example, will include both bracelets and rings.

The look-and-feel of Ringly is fairly chic, in terms of tech wearables, but may still be a little oversized to fit everyone’s tastes.

Its bulk is due to the fact that, inside, the ring features electronics that allow it to buzz and light up when there’s something you need to know.

With Ringly, users pair the app via Bluetooth with an accompanying smartphone application, and then can customize the light and vibration patterns for how their ring responds to various activities. By default, Ringly alerts you to calls, texts, emails and calendar events, but it also supports a large number of third-party applications.

That makes Ringly fairly competitive when it comes to Apple Watch and its alerting capabilities, as the lineup includes the most-used applications, and specifically those where you would want to know if there’s been a change – like a new message, comment, post, match, ping, etc.

To configure these in the Ringly app, you just tap an “Edit” button and add those items you want to include to your list of Notifications. After doing so, you can then further customize the alert type by tapping on the item to change the color of the alert and the vibration pattern. You can also add specific contacts to the app, allowing you to receive alerts when someone important is calling or texting.

Ringly only supports a handful of colors (blue, green, yellow, purple and red), and four are already used by the default alert types (phone call, texts, email and calendar events). That means you’ll have to get clever with regard to your customizations – perhaps making all messaging apps one color, but using varying vibration patterns to help differentiate them, for instance.

The app itself is very well-designed – elegant, even – and simple to use. In addition to configuring your alerts, the app also lets you control other aspects of the Ringly experience, including whether to put the ring in sleep mode when it’s not used, buzz when it’s out of range, and more.

Another clever aspect to Ringly is the way the device is charged. The Ringly ships in a small, black ring box that plugs in via USB. You place the ring inside the box – which looks like any other traditional ring box – in order to start charging it. The ring box has its own battery that lasts over a week before needing to be charged via USB, but the company advises that the box is plugged in regularly.

Though initially I thought making the charger a ring box was a nifty trick, that also means that Ringly can’t really be stored in a jewelry box along with other rings, or in a jewelry cabinet. It needs to be near a USB charger or the USB port on your computer. And because I already have enough devices and cords hanging around my nightstand, Ringly’s charger found its way to the office, alongside Fitbit and my other less-used wearables.

While setting up the Ringly charger in the office, I took the time to give it a whiff, and it seems like it’s the box and not the ring itself that’s the source of the new, less noticeable smell. Though definitely far better than the first ring (that one smelled so bad it was unusable), there’s still a slightly unpleasant scent to the box which then transfers to the ring. But as I wore Ringly, the odor faded. At this point, I wouldn’t call the smell a deal-breaker, but rather a point of concern. 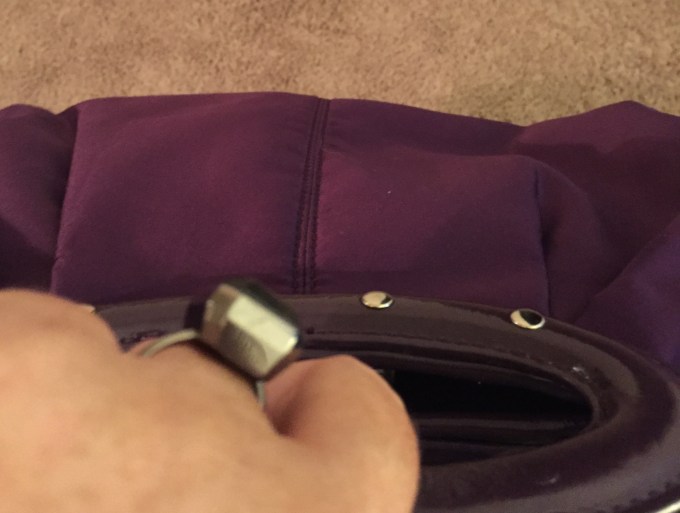 Ringly says the ring will last 24-48 hours on a single charge, which means you can count on using it for at least a day. But it’s a good habit to return it to the charger at night.

While the Ringly worked as advertised and was easy to use, there was a part of me that felt it was a little juvenile to be wearing a device that flashed lights, however subtle they may be. I imagine some customers will decide the same, and will turn off the lights altogether in favor of vibrations alone. However, doing so makes it more difficult to identify the incoming alerts.

There’s also a learning curve to using Ringly. You may not immediately remember what the colors or vibrations mean, so it’s best to start off with a small group of alerts, then add more customizations over time.

In addition, priced at $195-$260 (depending on the style), the Ringly is not exactly an impulse buy or toy – you’ll have to seriously consider if you’ll use Ringly enough to make it worth the investment. This is true, too, because Ringly doesn’t last forever. The battery is not user-replaceable and reportedly the ring has a three-year lifespan. (The company says now it’s more like ~2 years.) 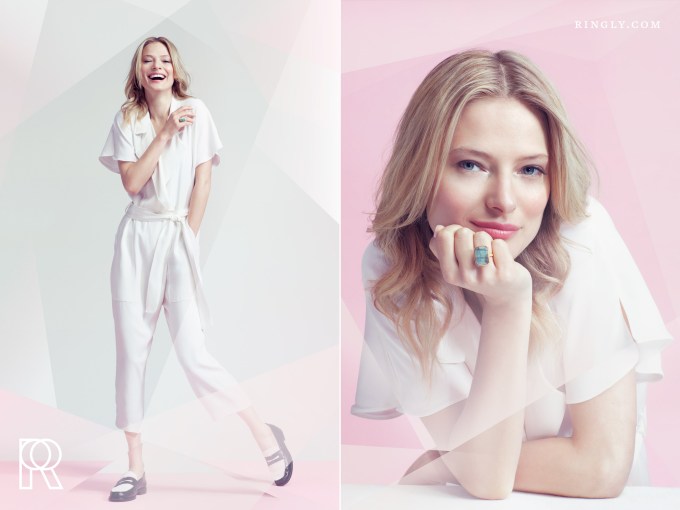 And in my case, having spent just a little more on the Apple Watch, a notification-sending ring feels a little redundant.

That’s not to say that Ringly doesn’t have its place. After all, not everyone wants an Apple Watch or other wrist wearable. But it raises the question whether there’s going to be a large enough market for this, at its current price points.

“There are a lot of wearable tech products on the market today, but many of them lack the aesthetic quality that women are looking for when they shop for accessories,” she explained. “Ringly takes a different approach by making the ‘technology’ feel discreet and invisible.”

“We strive to create designs that our customers would want to buy even if it didn’t have technology inside,” she added. “In the future, we believe people will be shopping for wearable tech devices the way that today they shop for clothing. There will not be a one-size-fits-all solution; we’ll want to buy the piece that fits our personal style and the functionality that fits our lifestyle.”

But the bigger difference between the ring and the smartwatch is not about their aesthetics, but that the watch actually allows you to take action from your wrist when an important alert comes through. You can take that call, or quickly reply to that text.

Ringly only alerts you. That means, if you want to respond, you’ll still have to dig your phone out of your bag anyway. And wasn’t that the hell that the ring was supposed to deliver us from in the first place?