Kamcord, the YC-backed company that enables game recording on mobile, is the latest company to jump on the mobile live-streaming bandwagon after it added the feature to its Android and iOS apps.

While Meerkat and Twitter-owned Periscope are increasing awareness of live-streaming, both for sharing content and consuming it, the game streaming business — which is dominated by YouTube and Twitch — is still very much a desktop affair. This Kamcord update takes things decidedly in the direction of the future. The apps already allowed users to record their gameplay for upload later, but now you can tune in and watch top Kamcord players — an initial 22 partners boasting a combined 8 million YouTube subscribers are aboard live-streaming — strut their stuff in real-time.

Initially, though, streaming is only possible via the web app for creators, so it isn’t open for everyone, but Kamcord told us that it is looking to add native live-streaming to its Android app very soon. That feature will be harder to implement on iOS, since it is not supported yet. But Apple is preparing to introduce the first native replay feature that developers can take advantage of — ReplayKit in iOS 9 — so it could come to the iPhone and iPad later. 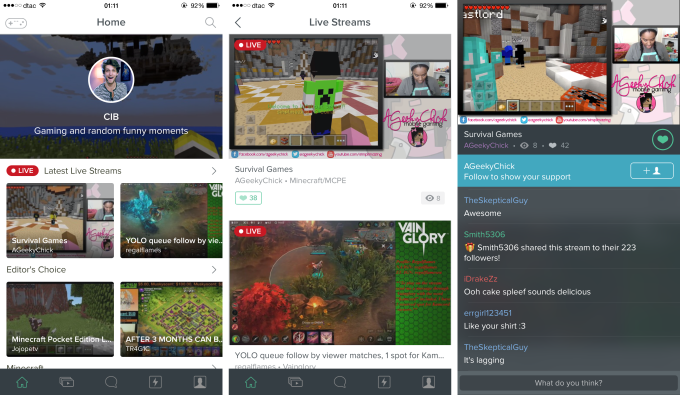 In addition to today’s new feature, Kamcord also revealed that it has surpassed 1 million registered users on its service. That user base has recorded over 50 million videos, the company added.

These stars — for example Kamcord creator Chief Pat, a Clash Of Clans specialist with 1.4 million YouTube subscribers — are drawn to the service because advertisers come first on other platforms and “they’re frustrated that they can’t activate their audience on YouTube,” Rathnam said. Kamcord wants to simplify the current setup for them, which he explained, requires creating a YouTube video, promoting it on Twitter and using Twitch for live-streaming components.

Not only that, and better audience engagement, but Kamcord is also working on ways to allow creators to monetize their audience directly. That might include the option for fans to pay to stand out in the comment section, or for closer interaction with stars, Rathnam explained.

“Other top creators and I have wanted a dedicated mobile gaming community for a long time. Keeping fans happy is our number one priority and there’s no doubt that fans are going to have a blast interacting in real-time on Kamcord streams. There’s just so many more ways to form a stronger connection when the conversation goes both ways,” said Chief Pat in a statement.

Kamcord, which raised $15 million last December, sees 40 percent of its usage from the U.S., with a further 30 percent from Asia, but there’s potential to grow that latter figure in mobile-centric Asia.

The company has already upped its focus on Korea and Japan with dedicated offices in both countries, and it said that China will be its next location for a local presence. That focus on those three markets makes sense: Japan remains the country with the highest spend per app download, Korea boasts the world’s fastest mobile internet speeds, and China is the planet’s largest smartphone market.