Getting apparel made in other countries is like playing a game of telephone. As designers and manufacturers ship prototypes back and forth for weeks, problems ranging from poor quality control to logistic headaches often arise. More seriously, it’s difficult for companies in the U.S. to make sure factories treat workers fairly. Maderight, which recently launched out of Y Combinator, wants to make the process as simple as a white T-shirt.

The startup says designers sometimes need to work with more than five companies—including textile mills, factories, logistics providers, and trucking services—before their creations hit store racks. As an intermediary between brands and companies, Maderight provides each of their clients with a production expert who oversees every aspect of the manufacturing process, from creating a “tech pack,” or technical design files, to making sure completed orders are shipped to warehouses on time.

Maderight, which is also taking part in StartX, the accelerator program backed by Stanford University, works with more than 50 factories which have been audited by third-party inspectors such as SGS, Intertek, and Bureau Veritas. It regularly conducts its own checks to make sure manufacturers maintain safe working conditions, don’t use child labor, and give employees enough rest breaks.

The startup began operating in March and has already signed up over 40 brands, ranging from first-time designers to apparel companies worth over $100 million.

Maderight’s founders—Kent Mori, Kevin Chan, and Shuo Yang—understand the problems clothing designers face because they used to run ASPECD, which made custom-fit men’s shirts and ran a successful Kickstarter campaign two years ago.

Thanks to Yang’s experience working in manufacturing, ASPECD managed to ship pre-orders before their Kickstarter deadline. Other clothing brands asked them for help and Maderight was born.

“Our main target initially is people who want to start some kind of clothing line but don’t know where to go, essentially people like us two years ago when we started ASPECD,” says Chan.

How Maderight Makes It Right

Producing clothing is much more complicated than drawing a sketch and sending it off to be sewn up. Designers need to go to tradeshows to find factories and contact mills for textile samples. Once they select fabrics, swatches are sent to manufacturers, who then start making samples.

Chan says it usually takes three or four samples, each of which are sent to designers for feedback, before a product is approved and ready to go into production. Then manufacturing takes about a month—but only if something doesn’t go wrong, like an order from a larger company taking precedence over a smaller brand’s and delaying its shipment.

Since Maderight’s team has worked with so many factories, Chan says they understand the problems that pop up the most frequently. Preventing them results in faster production and cost savings for both brands and factories. 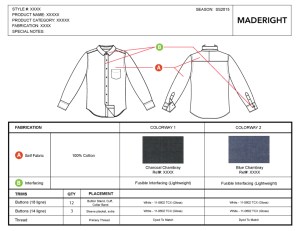 “We give the brand a checklist for what they have to give us and we standardize everything to make it easier for the factory, reduce lead times, and costs. You aren’t sampling as many times, because usually the factory gets it right with the way we standardize tech packs,” says Chan. “We’ve worked with factories enough to know which measurements they generally mess up on and which ones they need.”

Maderight’s main competitors include Alibaba, which many small brands use to source manufacturers and materials. Challenges faced by designers on the platform, however, include time zone and language differences.

Another startup called Maker’s Row streamlines the manufacturing sourcing process, but focuses on U.S. factories. Finally, many designers rely on sourcing agents. Chan says, however, that they often charge high upfront retainers. Maderight’s pricing tiers go up to $499 (not including samples) and are designed to be affordable for small brands and individual designers.

Most of Maderight’s manufacturing partners are in China, but it also partners with factories in Japan, Mexico, Italy, and Guatamala. Maderight ensures more transparency about working conditions than most sourcing agents because in addition to third-party audits, it only uses factories that have an open-door policy.

“We have a team in Hong Kong and will drop in to factories to make sure they are not just putting on a show when there is an audit going on,” says Chan.

Each production expert works with four to 12 clients, depending on the brands’ requirements. The company’s dashboard currently shows clients the progress of their orders, but it plans to develop more powerful tools.

“Right now, we are really in a learning phase. Once we figure out exactly what our clients want, then we can automate all of this essentially. There will always be a human component, but we are trying to bring as much as we can online,” says Chan.

Maderight plans to scale up by serving other verticals. It is already helping companies from Y Combinator and StartX, a non-profit accelerator and Stanford University partner, find hardware and electronic manufacturers, and eventually plans to go into plastic and agricultural manufacturing, too. In each industry, it will apply the same model—manufacturing sourcing, design help, and audits—before overseeing more of the manufacturing process.

“We want to tackle more of the supply chain down the line,” says Chan. “The end goal is to also do the warehousing and ship directly to our customer’s customers.”