U.S. users of Twitter and Facebook are increasingly getting external news via the two services, according to a new study by the Pew Research Center.

“The share of Americans for whom Twitter and Facebook serve as a source of news is continuing to rise. This rise comes primarily from more current users encountering news there rather than large increases in the user base overall,” the report notes.

The researchers report substantial growth in the proportion of adult web users saying each platform serves as a source for news about “events and issues outside of friends and family” — with 63 per cent of Facebook users and the same proportion of Twitter users now saying that, up from a majority (52 per cent) of Twitter users and 47 per cent of Facebook users back in 2013.

Pew’s data shows this behavioral increase cutting across almost all demographic groups — including users under 35 (growing from 55% to 67%), and those 35 and older (rising from 47% to 59%). While on Facebook, news use grew among both men (44% to 61%) and women (49% to 65%) over the two years. Younger users remain more likely to get their news via Facebook than Twitter, according to the study.

Both tech platforms prefer to couch themselves as content distribution platforms, rather than content publishers — typically denying they have a role in editorially shaping what their users see, despite making what some might term ‘editorial judgements’ to, for instance, remove certain types of content from their platforms. Add to that, their algorithms continually make judgements to curate or personalize the content their users see.

What’s clear is that as social media’s role in the distribution and sourcing of news becomes more dominant, and the role of tech algorithms in foregrounding and disseminating certain content/content types (and vice versa) becomes more apparent, questions about how digital platforms are influencing public opinion will continue to grow.

“As social networking sites recognize and adapt to their role in the news environment, each will offer unique features. These different ways of connecting with news have implications for how Americans learn about the world and their communities, and for how they take part in the democratic process,” notes Amy Mitchell, Pew Research Center’s director of journalism research, in a statement.

Facebook also recently launched a program to natively host publishers’ content — called Facebook Instant Articles — with the aim of reducing article load times in the hopes of keeping users sticking around on its platform for longer. Partnering with media firms directly positions Facebook even closer to the already rather fuzzy dividing-line between ‘publisher’ and ‘platform’.

The researchers also found that different habits and topics are more suited to different platforms — such as people on Twitter being more likely to follow news organizations, reporters or commentators (46% vs 28%); while Facebook users are more likely to post and respond to news content about government and politics:

The notion that Facebook users are sitting within a personalized filter bubble has been long discussed — culminating, in a notable instance last summer, in users pointing out the stark contrast in what they saw on their Facebook vs Twitter feeds during the Ferguson protests.

Pew’s results appear to bear out that Twitter news users are more likely to be regularly exposed to news posts across a more diverse range of topics than those sourcing news via Facebook: 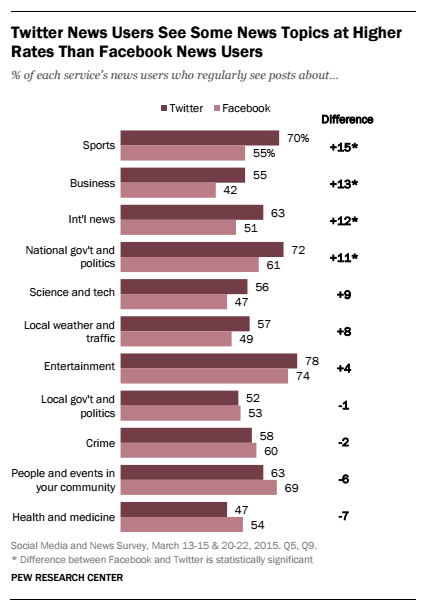 The researchers note some gender differences in news consumption habits on the two platforms too. On Facebook, Pew found women are more likely to regularly see posts about health, entertainment, and people and events in your community; while posts about weather, entertainment, crime, and health are more commonly seen by women on Twitter.

When it comes to news users of the platforms commenting on news, the proportion across both platforms was about the roughly same, according to Pew — with around a quarter of both Facebook (28%) and Twitter (23%) news users at least sometimes posting or tweeting about news.

The study is based on a survey of more than 2,000 U.S. adults, including 331 Twitter users and 1,315 Facebook users — a proportion which Pew notes reflects the representative differences in the number of Americans who use each platform.