Though an undisputed and hugely popular trend when in comes to streaming video consumption, opinions on binge-watching run the gamut from those who lament how the all-you-can-eat model makes series seem like obligations rather than entertainment, to those who have, increasingly, more positive feelings about the activity. That being said, the behaviors and motivations of those who binge-watch are only now being explored.

Today, the findings of a new study on binge-watching consumers reveal this demographic’s lower tolerance for negative experiences as well as their somewhat fickle nature – that is, more than half of binge watchers are neutral-to-unlikely to return to a series they’ve stopped watching for any reason. Once they’re gone, they’re often gone for good.

The survey data comes from Conviva, a video optimization provider who works with media companies and over-the-top (OTT) broadcasters, including HBO, Sky and Foxtel, among others. The company regularly releases analysis of the OTT market thanks to the 50 billion streams it tracked annually. However, for this particular report, Conviva surveyed 750 binge watchers themselves to help better determine what makes this group of TV watchers tick.

The rise of binge viewing, of course, has been fueled by the shift to over-the-top streaming video services like Netflix, Amazon and Hulu. Without the constraints of pay TV and its rigid schedules, consumers can now watch entire series in large chunks of time – spending hours moving from one episode to the next, instead of waiting for new releases every week.

The behavior is now commonplace. Netflix said last year that 61 percent of viewers regularly binge watch shows. Notes Conviva, given that current estimates put the OTT-watching audience at over 190 million people, that means that the binge-watching audience is at 115 million today.

These viewers also tend to be devoted to a small number of shows at a time. 87 percent said they would binge watch 3 or fewer shows at the same time. Most – 41 percent – watched just one show “binge-style” at a time. In addition, more (61 percent) watch shows via streaming not offline downloads (11 percent). 28 percent said they did both. 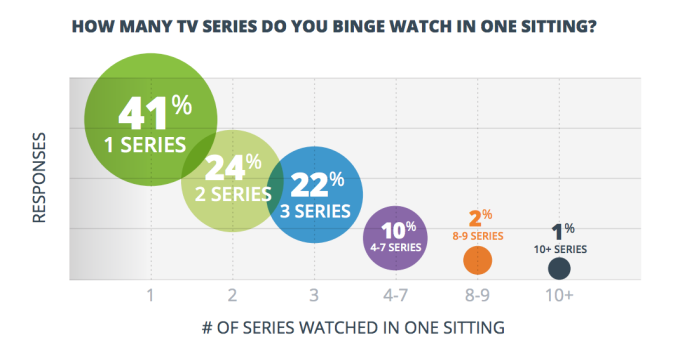 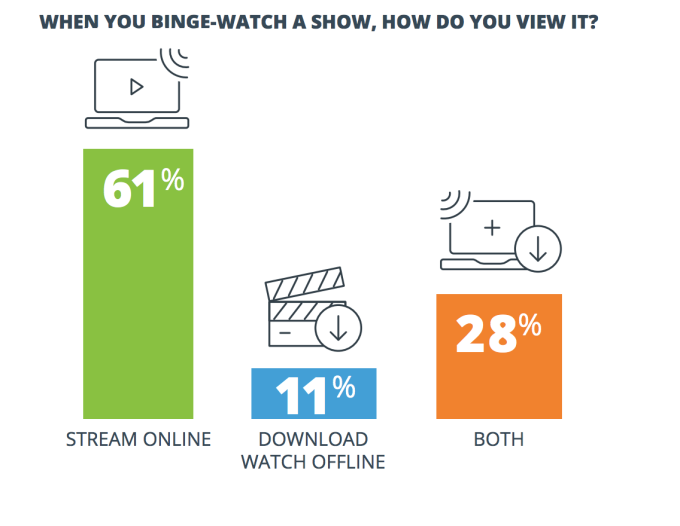 Even more interesting is that Conviva found that a large number of viewers would binge watch on their computer (60 percent did). 37 percent said they still have pay TV and binge watch via video-on-demand, while 37 percent said they used a connected device, like a Roku or Apple TV. 32 percent binged on a tablet, 26 percent on smartphones, and 25 percent on game consoles. As these numbers indicate, viewers watch shows across a range of devices (which is why the numbers don’t total 100.) Also worth noting, the news that laptops are a leading category contradicts recent data from Hulu’s own internal data which indicates that living room viewing is growing at the expense of PCs. But perhaps Hulu is not exactly a place where people binge, given that many of its series don’t offer up the full season. 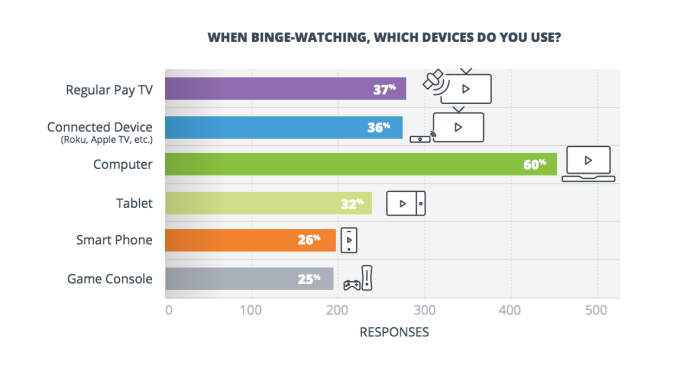 For those who engage in this binge-watching behavior, there’s something of a desire for instant gratification. If the next episode of a series isn’t immediately available on the service they’re using, most (42 percent) simply start another series. It’s harder to get them to stick around and continue with that show by looking elsewhere for the next episode (25 percent would seek it out), or just wait for a new episode (only 22 percent would). 4 percent say they would give up on the show entirely and move on.

The problem is that once consumers move on, they might not come back. While 59 percent say they would watch an old and new series together, a quarter of respondents said that once they start watching a new series they put the old one on hold. 11 percent replace the old with the new, and 4 percent give up on the old one.

Related to this, if a viewer stops binge-watching a show before the end of the series for any reason, 27 percent are neutral or unlikely to return – a figure that matches up with the 29 percent who said they would move on in the case of an unavailable episode. 45 percent said they’re “very likely” to return, and 29 percent said “likely.”

Or, in other words, 55 percent are less than fully committed to return when they take a break – and that’s a figure that may frighten show runners  – one miss could see over half a committed audience lose its dedication to continue with the series.

These numbers help to explain why streaming services like Netflix and Amazon now regularly dump entire seasons of shows at once, instead of releasing them in the traditional week-to-week model.

But it also helps to illustrate the challenges networks will have retaining audiences when limiting the number of episodes available on streaming services. For example, many shows on Hulu only offer a small handful of the past few episodes, not the entire season, because of licensing agreements. Meanwhile, many shows on Netflix are missing the most recent season or seasons, which forces viewers to move on to something else. Both decisions can ultimately affect the size and scope of a series’ dedicated fan base, and their willingness to return.

More data is available in the full report, here.