Spoiler Alert is an app that wants to put itself out of business.

That’s unlikely to happen considering the enormity of the problem—food waste—the startup is tackling. Its founders, recent MIT Sloan graduates Emily Malina and Ricky Ashenfelter, however, hope to keep tons of food out of landfills by making it quick and simple for companies to donate or sell surplus inventory.

Based in Cambridge, Mass. and currently available in the New England region, Spoiler Alert is a business-to-business marketplace. Eight organizations participated in its pilot program earlier this year and Malina says nearly 10,000 pounds of food were donated through the iOS app (web and Android versions are coming soon). Some listings were claimed in as little as three minutes.

Now the startup is recruiting more businesses, seeking funding, and eyeing expansion throughout the U.S. Ultimately, Malina and Ashenfelter want to build a food analytics platform to help companies plan their inventory so there is less waste in the first place.

A Simple Alternative To Tossing Food Out

Nearly 50 million Americans live in “food insecure” households, which means they don’t have regular access to affordable food. Every year, however, nearly one-third of food inventory goes to waste, or about 20 pounds per person, according to the United Nation Environment Programme and the World Resources Institute.

Hunger is a huge problem, so why does so much food end up rotting in landfills? Often it is because trashing surplus inventory is the easiest, least expensive option for companies, especially if they have to make quick decisions about products that are about to expire or spoil. Malina says grocery stores and other businesses are often unsure of how to donate food or don’t know about the Good Samaritan Food Donation Act, which protects them from legal liabilities.

“Many people come to this issue from an environmental or social perspective, which is absolutely right, but it also has serious financial implications for food businesses, many of which are dealing with extremely slim margins across the industry. To put that into perspective, at least in a U.S. context, businesses are throwing away $50 billion worth of lost revenue and hauling fees in wasted food,” says Malina.

“It’s quite significant from a financial perspective and that is where we are starting the conversation with food businesses coming on the platform.”

Spoiler Alert is designed to remove obstacles to food donation. It connects retailers, producers, and supplies to nearby non-profits for donation or, in the case of products that are no longer edible, companies that make fertilizer and animal feed.

Notifications are sent out as soon as new inventory is listed and all transactions are recorded in the app, which makes it easier for donors to prepare tax deductions.

“What we offer is an opportunity to save money through a variety of ways. If companies are able to reduce the amount of food they throw away, they can have fewer hauling pickups, which reduces hauling fees,” says Malina. “We offer a secondary market for discounted food sales, which enables new revenue streams, and streamline and simplify the documentation for tax benefits, which are quite sizable.”

Food companies also now face an increasing number of government policies designed to reduce food waste. The Commercial Food Waste Disposal Ban in Massachusetts, which went into effect last fall, means that businesses can’t trash more than a ton of food waste each week and instead have to find ways to recycle it. In France, new regulations mean grocers that deliberately destroy unsold goods face hefty fees or even jail time.

“These policies are really changing the dialogue and the way businesses operate. They think about composting but also other uses for food that might be more optimal, like feeding people that are hungry, but also animal feed, biofuel production, and land amendments for farms,” says Malina.

Spoiler Alert is free for companies that donate food and plans to monetize by taking a commission on discounted food sales and adding a software-as-a-service subscription for businesses that need to keep accounting and tax documents. 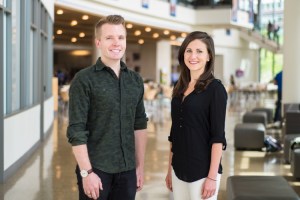 Before enrolling in MIT Sloan, Ashenfelter witnessed the waste created in the supply chain while working with large food and agricultural companies as a consultant. Malina, meanwhile, worked with public sector agencies, developing technology to replace programs that had been done manually for years.

When the two met at business school, they quickly realized their backgrounds could be combined to create a tech-based solution to food waste.

Spoiler Alert hopes to expand quickly, starting next year in New York City, which also has a new commercial food waste ban, as well as in other markets where similar policies exist, such as San Francisco, Seattle, and surrounding New England states. The startup may also go international—Malina says it has received inquiries from businesses, non-profits, and government organizations in ten countries.

“If we get to the point where there is zero wasted food, I will feel like we have done our job, but I don’t see that happening seeing as $165 billion worth of food gets wasted every year in the U.S. alone,” says Malina. “Food is a really tricky product given its short shelf life, so businesses will always need a real-time solution to deal with variability in their inventories and supply chains.”