Groupon’s deal-finding iOS application was updated today to include support for Apple Watch. Like many Watch apps, Groupon’s takes advantage of its ability to tap into a user’s location by way of their connected iPhone, then it uses this awareness to alert you to deals available near you. Unlike with Groupon’s mobile application, whose home screen features deals in your general area – like a city or metro region – the new Watch app instead focuses on those offers that are in close proximity. It then orders them by how many miles away they are from your current location.

And when you find one you like, you can buy it directly from the Groupon Watch app itself.

The Watch app is actually well-built. It manages to deliver the key information about the various deals despite having limited screen space. On the main screen, deals feature a photograph, the name of the business, distance from you, the usual price and the discounted offer. You can scroll through the deals with finger swipes or by turning the Watch’s digital crown.

When you then tap into a deal to read more about it, you’re shown a description of the offer itself (e.g. 73 percent off yoga classes), proximity, price, and even a map to the location. If you choose to purchase, you can simply tap the green “buy” button to check out. This will require that you already have a credit or debit card stored within the Groupon app on your iPhone, however. 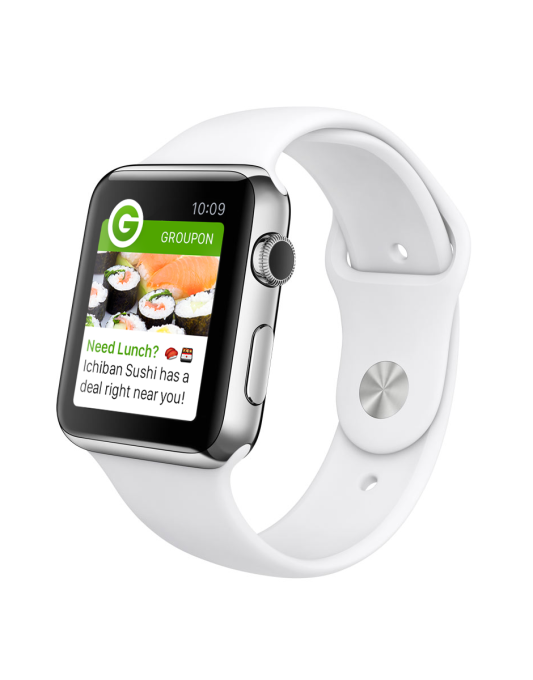 There are a number of merchants who are trying to figure out if the Apple Watch makes for a good commerce platform, but the idea of browsing through merchandise and products on the wrist doesn’t seem to be a natural fit. Groupon, however, is tapping into this idea that the Apple Watch is often most useful when bringing you timely information – like the ability to save money at a local business that you’re visiting now.

In order to avoid spamming users with notifications, Groupon focuses only on sending deals that fall within a certain radius, and even then it’s curating the selection that get sent to the Apple Watch. How well it manages to find the right balance between what’s useful and what feels like too many alerts is yet to be determined – the app only launched today and will require more testing.

It’s worth noting that the Groupon Watch app is not yet complete. The company is still working to develop other critical features that will round out the overall experience, including support for Glances to view your savings to date and unused vouchers.

Also in the works is support for reminders of vouchers that are expiring, and most importantly, Groupon is working on a way to allow users to actually redeem the vouchers via the Watch app itself. That would make the experience of using Groupon for Apple Watch much better, as today you’ll still need to pull out your iPhone after you purchase if you’re interested in using the voucher immediately.

Groupon has a strong mobile presence, with around 105 million app downloads worldwide. The company has sold more than 800 million deals to date, including around 54 million in the first quarter of 2015. While the Apple Watch today still has a small footprint composed largely of early adopters, as the wearables market grows, it should be interesting to see what sort of impact the new app will have on Groupon’s ability to connect consumers with local merchants and relevant deals.