Ordering pizza by tweeting an emoji of slice to Domino’s is not as fun as it sounds. In case you missed it, in a expansion of its “Anyware” program, Domino’s announced earlier this month that it would soon roll out a “tweet-to-order” system that would allow anyone on Twitter to simply tweet the pizza emoji to the @dominos Twitter account to place an order. But getting started involves a bit of setup that makes using the Twitter ordering system not as efficient as you may think.

Full disclosure: as it turned out, Domino’s doesn’t deliver in my area, so I can only speak to the onboarding process – but it’s here where Domino’s currently falls short. Once you have your account setup and your “Pizza Profile” built and configured, order placement is actually the easy part.

First of all, there’s a problem with the way this system was initially described. If you read the various news announcements, you might have thought (as I admit I did) that, beginning today, all you would have to do is tweet the pizza emoji to Domino’s and you’d be on your way. This is not actually the case.

I tested the system by first tweeting the pizza emoji to @dominos at 12:43 PM ET today, and waited to see what would happen next. (You can also tweet using the hashtag #easyorder if you don’t have access to emoji from your Twitter client.)

I think I have to try this? @dominos 🍕

My guess, having not visited the website or read through the instructions (as likely few consumers actually do) is that a Domino’s rep manning their Twitter feed would identify me as a new customer and then proceed to inform me of the next steps.

I didn’t actually have an online account with Domino’s, as I usually order elsewhere, so this made me an ideal customer to try the new system.

I thought that, following my tweet, @dominos would probably respond by pointing me to a special URL via an @reply or DM (Twitter’s direct messaging feature). Or perhaps they would actively collect my personal information including name, address and payment details via a DM conversation.

After all, Twitter had been testing a “Buy” button with select partners since last fall – it would make sense that something as potentially ground-breaking as a Twitter-based online ordering system from one of the U.S.’s largest pizza chains would be taking advantage of this feature.

But as it turns out, that was not the case.

Instead, for a solid five minutes, nothing at all happened. Not a tweet, not a DM. Nothing.

Now the Domino’s account kicked into action, but it didn’t help me actually get started with the process of a Twitter order. Instead, it only replied “Welcome to Domino’s Tweet Ordering!” and instructed me to tweet using the hashtag or emoji.

I was about to respond that I had already done this, when a second tweet rolled in. This one, obviously written by a real support rep, apologized for the issues and told me instead that “emoji tweet orders must be placed using less than 25 characters,” but that there was no limit when using the #EasyOrder hashtag.

@sarahintampa Sorry for the issues! Emoji Tweet orders must be placed using less than 25 characters. No limit when ordering using #EasyOrder

I mean, maybe it was the hunger talking, but this really irritated me.

Twitter itself has a character limit of 140 characters, so why is Domino’s fancy emoji-detection system limited to just 25? (My first tweet had been ~40 characters, for what it’s worth.)

Nevertheless, I responded – in less than 25 characters with said pizza emoji – and finally, progress was made.

Via DM, Domino’s told me I hadn’t set up an “Easy Order” and to visit Dominos.com. 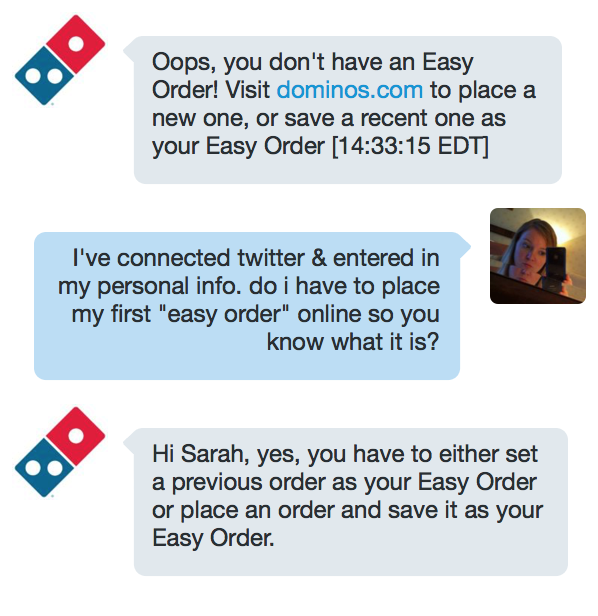 Hey Domino’s! If I wanted to order pizza using the web, I wouldn’t have tweeted to you!

(Okay, that was definitely the hunger talking.)

Online, you go through a fairly routine series of steps to create a Dominos.com account and “Pizza Profile,” including providing the company with your name, address, email, etc. I tested this via the mobile web, though, given that a Twitter ordering system relying on emoji is likely something that smartphone owners would be using.

Unfortunately, Dominos.com’s mobile website first stalled on loading the “create account” screen. And then, upon reloading the website, it simply showed me a blank white page with the pop-up ad that pointed to the Domino’s iOS application in the App Store. 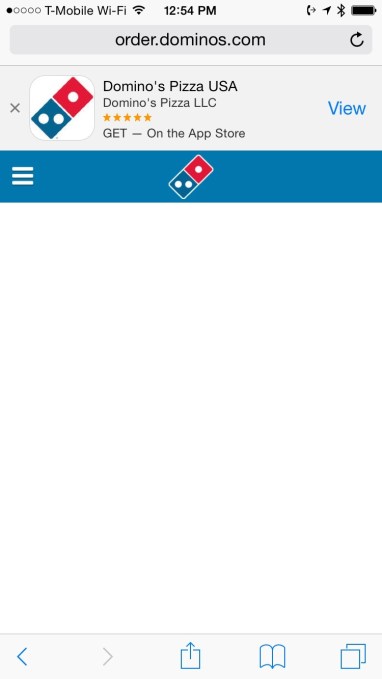 Oh there are just so many modern ways to order pizza, aren’t there?

I had to close the window entirely then open a new tab to get the mobile website to work. Afterward, the “pizza profile” creation process was fairly straightforward, if a little time-consuming. (I hate sign-up forms that make me enter in my email information twice, by the way. Ugh. Especially on mobile!) 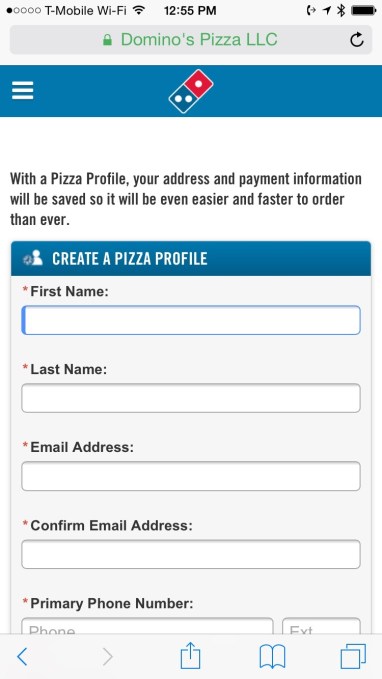 Now I had a “pizza profile” account established. That is, I had provided Domino’s with my name, address, email and other personal information via their website. Credit card details were to be entered at checkout, the site informed me. 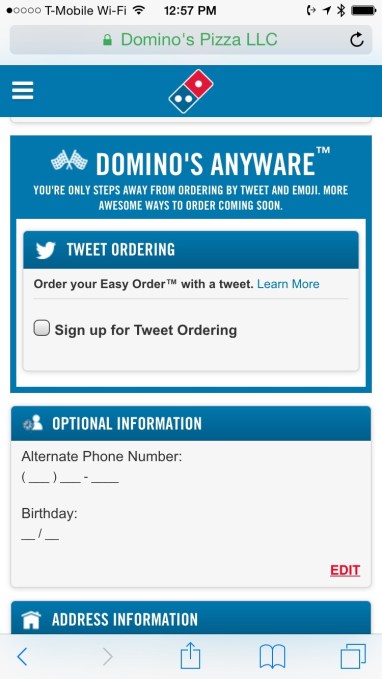 You might think this would be enough to kick off my a Twitter-based order since Domino’s could now link my Twitter account to my Dominos.com web account, but that was not the case. According to a @dominos DM, I didn’t have an “Easy Order” set up so I still couldn’t tweet my order.

As it turns out, to create an “Easy Order,” they informed me I had to first place an order via the website and save it as my “Easy Order” for future use.

In other words, after all this Twitter back-and-forth, and all the time I spent creating an account via the mobile web, the only way to order pizza via Twitter was to first become a Domino’s website customer.

I proceed to put together an order, then found out that I could only do carryout because of my location. Oh well.

Presumably, if Domino’s delivered to my location, my future Twitter orders would have been smoother. Once I could save a favorite order on the web, placing subsequent orders would have been as easy as tweeting @dominos, as previously described. There’s a final step of confirming your Twitter order – which must be done within 20 minutes – also via DM. After confirmation, your pizza is made and delivered as usual.

Unfortunately, many consumers won’t get that far. With its numerous onboarding challenges, Domino’s is missing the point of frictionless commerce. And that’s a shame. Because Twitter + pizza should have been great, and it was instead a big disappointment. 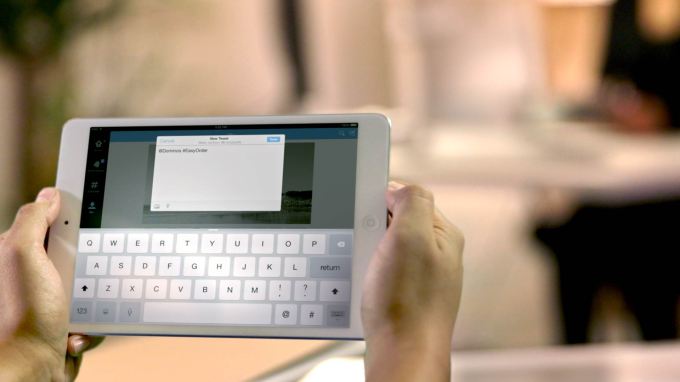 We’re entering in a new era of push-button commerce where anything and everything can be ordered on demand, from Uber cars to housekeepers to cookies to booze and even manservants, if you choose. Plus, a number of brand-new startups including Magic, Operator, Fetch, and GoButler now offer consumers a way to request anything they want – either just by texting a phone number, using an app or just talking to their Apple smartwatch.

Domino’s Twitter ordering system could have commercialized this push-button, instant gratification trend on a national stage, but it forgot that what made so many of the alternatives successful is that they were built for mobile first. Account set up takes place in an app or you simply message a company and they figure it out for you instead. They don’t tell you to go place an order on the web.

That makes Domino’s tweet-to-order system a novelty for now, and not the e-commerce revolution you may have hoped for.