3D printing is pushing into all sorts of areas, allowing for rapid prototyping of plastic and metal components, circuit boards and even putting putting an alternative spin on food production — or offering a lower cost way to construct living tissue structures for drug testing. Well here’s another big hope for the technology: wearable 3D printed clothes. (Not just the elaborate art pieces being currently created out of jointed plastics.)

Electroloom, a machine very much still in its infancy, is a prototype 3D printer that uses an electrospinning technique to turn a liquid (currently a custom polyster/cotton blend) into a seamless fabric — spraying the solution onto a shaped mold to create a garment without the need for assembling via stitching.

The San Francisco-based team behind the machine call this process Field Guided Fabrication, noting they are using an internal electric field inside the printer chamber to guide fibers onto whatever shape they are trying to create.

Because the 3D printed fabric is created from a multitude of tiny nano-fibers, they claim it’s able to flex and drape in a similar fashion to traditionally woven fabrics. The idea being to form entire, custom fitting garments without the need for extensive cutting and stitching — as today’s garment industry requires.

The Electroloom technology has been in development for around a year and a half at this point, and remains very much a work in progress, although the team has now launched a crowdfunding campaign with the aim of shipping a small number of alpha units (and a dev kit) to start getting outside feedback on the project.

“We’re looking for people who want to use, explore, break, hack, and improve our machines, so that ultimately we can provide a more robust and reliable technology,” they note on their Kickstarter campaign page.

At the time of writing they’ve raised just under half of a $50,000 target, with another 28 days of crowdfunding left on the clock. If they meet their funding goal, they’re aiming to deliver alpha units to Kickstarter backers by March 2016.

The garments they are currently able to print, such as the tank top and skirt pictured below, aren’t going to win any fashion awards. And their early fabric looks relatively thin — so probably isn’t too warm to wear — so there’s clearly a lot more development required for the tech and their technique to yield truly wearable clothes. But the potential for making clothes from sprayable fabrics certainly looks intriguing. 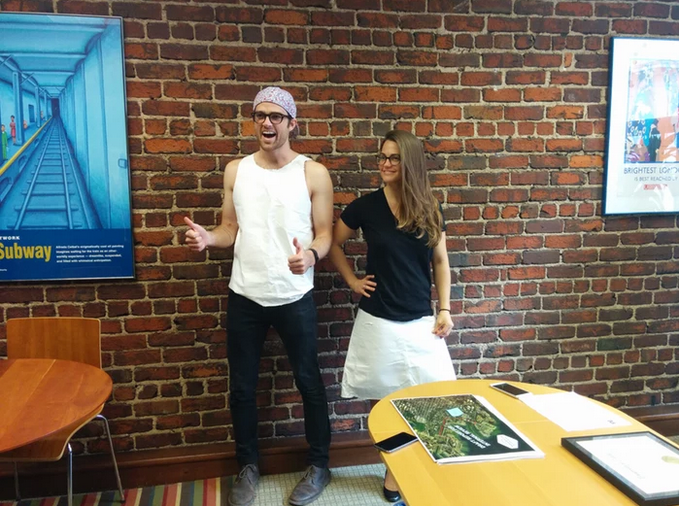