Mobile signal mapper OpenSignal has launched a new app that maps Wi-Fi hotspots to help device users in need of a connectivity fix — expanding its network of crowdsourced intel into another, albeit related area. (OpenSignal also launched a crowdsourced cell phone data weather-mapping app back in 2013.)

The new app, called WifiMapper, launches today on iOS, with an Android app due in about a month, according to co-founder and CEO Brendan Gill.

The app is free, and initially draws on a database of Wi-Fi hotspots generated by OpenSignal’s existing network of existing app users.

“We’ve been crowdsourcing data on mobile network originally, and wi-fi networks, for about four years. And we’ve had getting towards 15 million downloads of that application,” notes Gill, adding: “We think we’ve assembled one of the biggest databases of Wi-Fi networks out there.”

There are already scores of Wi-Fi hotspot mapping apps vying for attention on the App Store. But firstly its the aforementioned scale which Gill says makes OpenSignal’s WifiMapper stand out. “Compared to most Wi-Fi apps the scale of the data we’ve got is really much larger,” he claims.

The OpenSignal app active user-base now stands at 1.5 million globally, and it’s those users’ apps which are feeding data back to this new Wi-Fi hotspot mapping app — it’s claiming its database contains some 500 million hotspots.

The other big differentiator Gill points to is WifiMapper’s ability to distinguish between free Wi-Fi vs paid hotspots. There’s also some related context the app is shading in — so you can tell whether a free Wi-Fi hotspot is in a cafe or a bar, for instance. OpenSignal is meshing its data with Foursquare’s location review data to provide that added context, according to Gill.

“We’ve built intelligent algorithms to try and actually classify this Wi-Fi. Although we say we’ve got 500 million hotspots in our database most of those aren’t actually useful for users. The trick is actually figuring out which ones of those are free,” he tells TechCrunch.

“We’ve gone a lot further, and provide a lot more data to users, so we’ve figured out what actual place database this Wi-Fi point is attached to so you can see the actual place, the location, the name, the type of venue it is — is it a cafe, is it a bar — and also comments about the venue as well. We’ve cross-referenced it with the Foursquare place database.”

OpenSignal’s Wi-Fi hotspot is also measuring the quality of the Wi-Fi — another differentiating factor in Gill’s view. 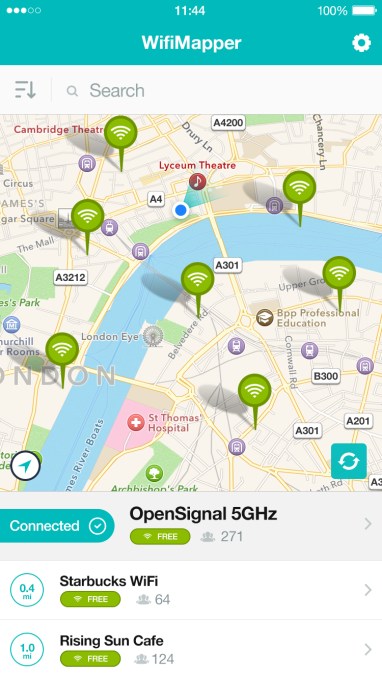 “Our app has continually been tracking the speed of the Wi-Fi, the latency and other actual performance indicators. So the goal, long term, is not just to be the most definitive Wi-Fi database but find the best free, comfortable, fast, non-congested Wi-Fi hotspots out there. And I think that’s something that none of the other apps are really doing,” he adds.

Figuring out whether a Wi-Fi hotspot is free (or not) is done via clustering algorithms and by parsing a host of signals (no pun intended), such as the location itself — if it’s a bar or cafe vs an office or residential property then it might be more likely to be free, for instance. It’s also taking the name of the Wi-Fi network into consideration. And OpenSignal detects whether there’s a re-direct post login, which Gill notes can be an indicator of a payment gateway.

And while it’s tried to do a lot of this automatically, post-launch it will also be engaging its users in crowdsourcing more Wi-Fi intel.

“The crowd can curate on top of our automatic algorithm what they think. Then we believe long term it’s the combination of this machine learning algorithm we’ve built up and then this engaged set of users tweaking the database a bit is going to give us the cleanest and best free Wi-Fi database ever,” he adds.

At launch, WiFiMapper users will not be pushed to using OpenSignal’s cellular data tracking app — which is where it’s drawing its revenue from at the moment (selling anonymized network quality intel back to telcos and others). But Gill says that’s something it wants to move towards “long term” — albeit it would likely offer WiFiMapper users the option to opt out from contributing cellular data.

“I think the line will get blurred because when it comes to Wi-Fi and mobile network signal it’s quite similar, so we think there’s going to be a good overlap there. And the kind of people that would like to curate Wi-Fi would also like to submit data about mobile network signal strength as well but ideally long term we would like to unite those communities, and to do it in a  very transparent way, giving users granular control over what data they contribute,” he adds.

While WiFiMapper is a free download, Gill adds that OpenSignal may look to monetize it directly in future via offering in-app purchases for additional features — such as offline access to the hotspot maps, which could be useful for travelers wanting to locate connectivity without having to enable cellular roaming.

Beyond that, there’s a grander vision around boosting contextual app awareness which OpenSignal is working on here.

“Part of the vision we’re working towards is understanding sensory data and trying to be really intelligent with it, so actually we see the potential of this data as being — as area we’re really getting into is contextual awareness, and recognizing where a user is based on a wi-fi hotspot we think is interesting data, and could be used to make more intelligent applications that understand if you’re in this wi-fi hotspot — if you’re in a cafe or you’re in a cinema — it’s just providing additional intelligence to what an app knows and can actually do based on that context,” says Gill.

OpenSignal raised a $4 million funding round last August to expand its team and push into tracking additional areas. Gill says it’s not currently looking for any more funding.