This past week’s Disrupt NY 2015 conference was my first opportunity to use the Apple Watch at a multi-day event, and considering Disrupt is always essentially a non-stop workfest for us here at TC, from morning well into night, it’d be hard to find a better real-world test case to see how the Apple Watch performs in this type of setting.

Handling an event like Disrupt, especially when you’re part of a large, multi-talented team, means keeping focused. My job at the semi-annual event is generally to provide a constant stream of photography from the stage, for use in our steady feed of posts covering what’s happening that go up in some cases while the speaker or speakers are still presenting. It’s a task that can tend to result in tunnel vision, since I’m literally spending a huge chunk of my day staring down the tunnel of glass that is the lens attached to my DSLR camera body.

Back at my MacBook, the screen real estate is taken up by a mix of batch image processing tools, file folders and browser windows, meaning work communication apps and things like Twitter take a backstage seat (whereas normally they’re front and centre on one of my external monitors). That’s a good thing in terms of maintaining focus, but it can also mean missing requests from the rest of the team, or dropping a crucial bit of news. 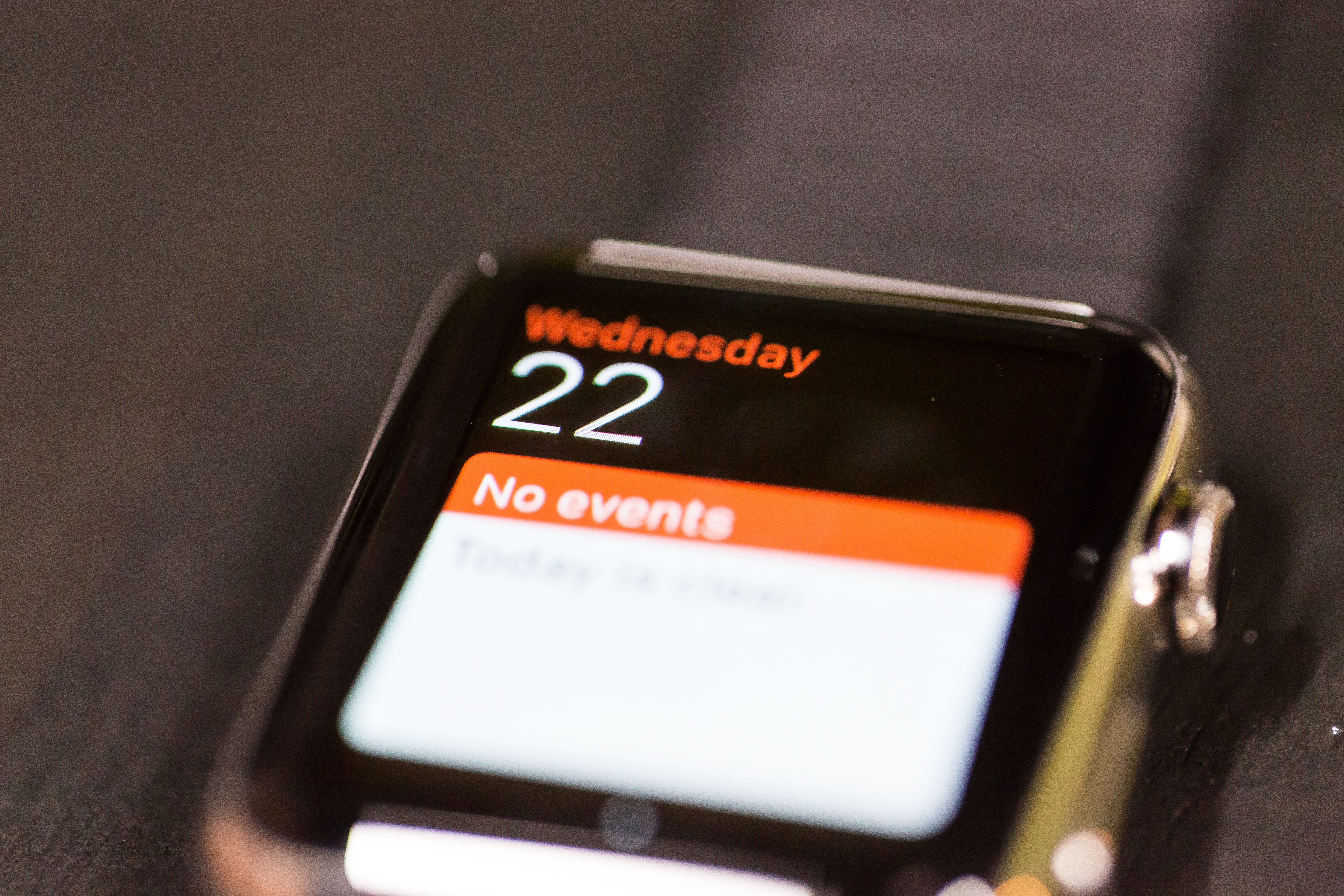 Apple Watch helps here because it can provide a stream of notifications from those crucial backchannel apps, meaning the team communication can continue without a sacrifice in focus. The Watch is the perfect channel for this because it’s not a distraction in the way that a persistent screen is; it provides an awareness that allows you to remain in the loop, without demanding your full attention.

The nature of the Apple Watch’s notifications are such that they engender an economical response. Apple’s interactive notification support in iOS carries over to the Watch, so that developers don’t even need to do anything more to get them working on the wearable. In practice this means I’m able to do things like archive email in Gmail, which is great for triage, but more importantly, it also lets me provide basic responses on some key platforms.

Specifically, I’m talking about the ability to “Like” a comment on Convo, which is a key backchannel communication platform for us. The simple “Like” is incredibly versatile, and can operate as either just a ‘seen and heard’ acknowledgement, or even as an affirmative response to a request for some kind of action. It’s enough to let me effectively communicate with team members in about 80 percent of the cases that I’ll encounter during the course of the event, and with the Watch I’m far, far more likely to see those requests and comments in order to be able to respond to them at all.

A positive response is often far more valuable than passive awareness in conference and event settings, when coordination is key. Apple Watch makes that much more achievable, even when you’re up to your eyeballs in other things you need to get done.

Events like these can also be taxing because they keep you more or less out of touch with folks back home. Conferences often mix professional and social functions, meaning your work day isn’t necessarily done until your head hits the pillow. Busy work days aren’t likely to jive well with family, friends and loved ones back home, however, no matter how packed your schedule is.

It’s in these situations that Apple Watch’s Digital Touch features started to become a lot more appealing to me. Sending sketches, taps and heart beats is actually far easier to manage then communicating even via text message. It’s also always within easy reach, even when you’re crouching in front of a stage trying to get a good angle on a laughing VC. 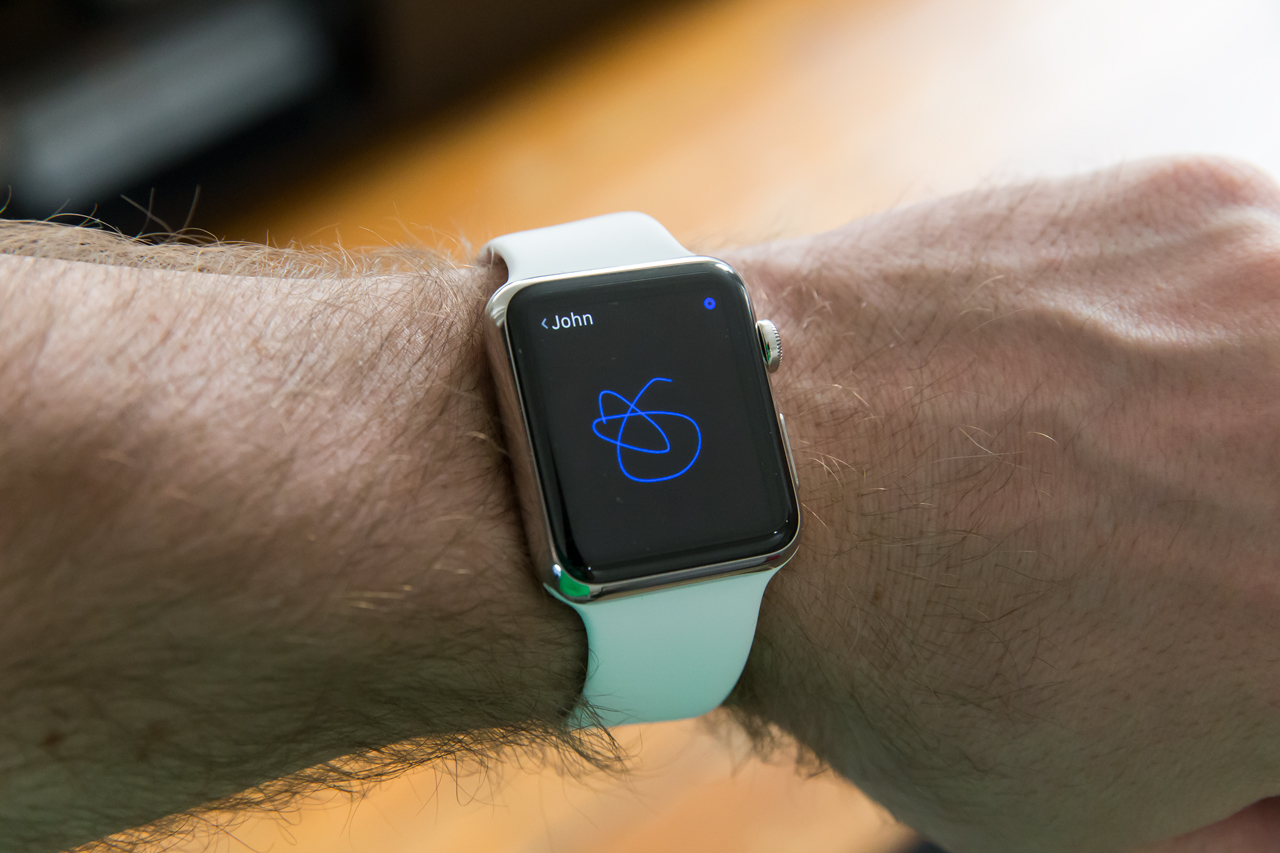 The Apple Watch’s communication tools are also extra nice because they’re very personal, which is a big plus when you’re otherwise out of touch with those you’re close to. Even a little bit goes a long way in cases like this, but Apple Watch seems especially adept at keeping the home fires burning.

Things That Could Be Better

There’s definitely room for improvement, and it’s easy to see how a few features could make the Apple Watch a nearly perfect event companion. The key ingredients as I see it would be smarter interactive notifications, and a way to set a specific app as the default wake option on your device.

Notifications are great for keeping you in the loop, as mentioned, and for acknowledgements, but they could benefit greatly from expanded response powers. App-specific customized canned text responses, for instance, would be perfect. Siri Dictation in all apps where a text response is available would also be great. With the flexibility to say a little more, you could get that 80 percent effective communication rate up to at lest 95 (leaving aside cases where you need to type at length to provide a complex response).

Apple Watch already supports waking the hardware to the last open application instead of the Watch Face, but I’d love a way to either have it wake specific to a particular app regardless of what else you’ve been using. This would let me keep my calendar front and center, for instance, which would be greatly useful for keeping track of what I’m supposed to be doing at any given time during events.

Finally, it would be amazing to be able to assign a specific app to a button press combination – say triple press on either the Digital Crown or the side button. That, combined with the power to set an app as a default, would give you access to at least two crucial information feeds with a minimum of input required.

I’ve used other smartwatches as conference helpers in the past, to great effect – the Pebble is generally my CES pal, even after I stopped using it day-to-day. Apple has done a much better job with the concept of a smartwatch overall than its competitors, and thus the Apple Watch is also a much better conference companion. It’s a specialized use case, to be sure, but one that’s also indispensable if you happen to need it.