TechCrunch Disrupt Battlefield alumni and former Disrupt winner Layer, a company that is offering developers tools to build their own communications platforms where they control the experience and the data, announced today at TechCrunch Disrupt NY that it’s expanding beyond mobile to now include support for web applications, as well.

In addition, the company announced the launch of a new fund aimed at investing in app businesses, called The Layer Fund.

The Layer Fund isn’t intended to give Layer a stake in the companies that build on top of its communications platform, but rather give those companies an opportunity to grow their businesses, which, in turn, benefits Layer.

“Our success at Layer is predicated on the success of the apps built on Layer,”  Layer founder and CEO Ron Palmeri says.

While previously, Layer had been offering tools that let mobile app developers create their own mobile messaging apps or add messaging as a component to their existing apps, its customers often came to Layer with questions about how to market their business or get press, and even how to begin the fundraising process.

Layer had begun to work with its customers on questions surrounding company positioning, and now with The Layer Fund, it can aid with customers’ other concerns, too.

The fund was proposed by Roy Bahat of Bloomberg Beta, and is joined by AnthemVP, CrunchFund (disclosure: TechCrunch’s founder also founded CrunchFund), SV Angel, Promus Ventures, Data Collective, MkII Ventures, and Jean Pigozzi. Also available as an AngelList syndicate, the fund will make around five deals per year at $50,000 to $100,000 apiece.

The goal, says Palmeri, is not to compete with conventional angels, but rather to provide an early team with access to capital. That’s something that Layer was already enabling to some extent, but through more informal channels.

The initial Layer Fund has enough capital on hand for its first year, and includes several of Layer’s own investors. Meanwhile, Fund 2 will source investors from AngelList.

Developers interested in being considered for investment are being asked to apply to participate in Layer Fund I Demo Day, scheduled for June 24, 2015, at Bloomberg Beta’s new technology hub in San Francisco.

“The only missing ingredient, once you have Layer and other platforms, is a little money, which is why we backed the Layer Fund,” explains Roy Bahat of Bloomberg Beta.

While today’s larger news is that apps built on Layer may now be able to apply for capital to get their businesses off the ground, the company also made several notable product-related announcements.

The most promising of these is that Layer will be expanding its product to include support for web applications in addition to mobile (and wearables), which is something its developer customers have requested for some time.

The addition will allow for a variety of expanded use cases for Layer-powered applications. For example, an on-demand app could enable communications between users who message customer support representatives from their mobile phones, while the support reps back at their desks could respond from a web interface.

Web support could also mean that Layer-backed apps could tap into some of the newer developments on the web, like browser push notifications, for example.

Layer also announced that it’s expanding its toolkit known as Atlas, which has previously allowed developers to integrate or customize an iMessage-like messaging feature in their apps. Atlas today provides a number of features, like the ability to send text, voice, photo and video messages, but what has been missing was maps. 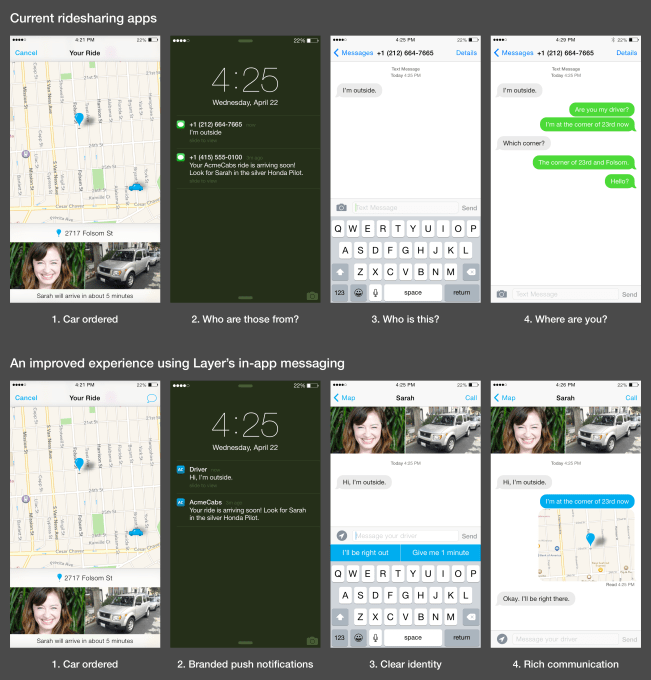 That was a critical need for Layer.

“Location is an incredible contextualizer to communications,” Palmeri noted.

The company is now announcing a partnership with Mapbox, a mapping provider based on OpenStreetMap.

By allowing developers to integrate maps into their messaging applications, they can create a better in-app communications experience. For example, a commerce company could send push notifications that offer its customers’ calculated ETAs for their deliveries, and these could include a map showing the delivery’s location within a message. 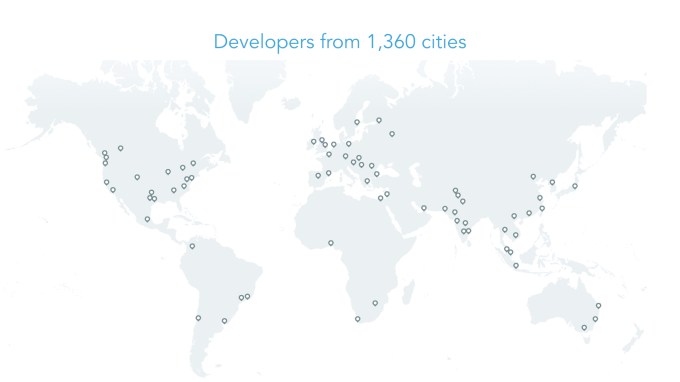 Since its launch and win at TechCrunch Disrupt SF 2013, Layer has grown the number of projects being built on top of its platform to now nearly 10,000, and has developers in 1,360 cities worldwide.