Shares of Salesforce popped today following a report that Microsoft is a potential candidate to purchase the public company best known for its work in customer relationship management.

Salesforce, worth around $47 billion as of the time of writing, saw its shares pop several points in the wake of the news, before seeing its price retreat to nearly pre-news levels. The Google Finance chart says the full story in minutes: 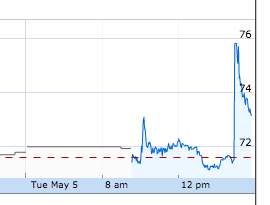 The company is currently up just under 2 percent, as investors have cooled to the potential deal/

Microsoft, which trades places with Google for second most valuable technology company, could well afford to buy Salesforce. Microsoft has cash on hand of around twice the current market value of its smaller rival. Of course, it’s unlikely that Microsoft would not use some equity in the deal — to fire off that much cash in a single go is a knee-buckling proposition.

The irony is simple: Salesforce and Microsoft are not only rivals in the CRM space, but have also been known combatants in tech.

The March Of The Rumors

The truth is there are only a handful of companies in the world that could afford to buy Salesforce and since the rumor first surfaced last week, we have seen several reports involving some of those companies.

Bloomberg reported on SAP’s and Oracle’s interest, and its post today on Microsoft’s reported interest sent the SFDC stock temporarily spiking. SAP has made it clear it has no interest.

Perhaps investors took a more tepid view when they realized that we are going to see a march of rumors from a limited list of suspects that could actually afford to buy a $40-50 billion company — and who would be interested in a cloud-based CRM.

One source, who chose not to be identified, told TechCrunch when this report first surfaced last week that they were told it was IBM who made the original bid. This person said they were also hearing HP and Cisco were also interested — and HP wanted to replace CEO Meg Whitman with Marc Benioff.

We caution you to take these statements with a grain of salt, but whoever bought Salesforce would have instant credibility in the cloud, a large, established cloud ecosystem and Marc Benioff.

For Microsoft, SFDC A Double-Edged Sword

As for the latest rumors, you could argue that Microsoft makes sense. The two companies, which once hated one another have grown increasingly chummy over the past couple of years. They have announced several partnerships. Microsoft wants enterprise customers in the cloud. Its CRM tool is on the weak side compared to Salesforce and it has huge cloud credibility.

It would not be clear what Microsoft would do with Benioff, but perhaps they could put him in charge of the company’s cloud effort.

The thing is that Salesforce is so much more than CRM. Just last month it launched a new HR tool. It has a mobile development platform and a platform on top of which many successful businesses have been built independent of SFDC. It would be hard to imagine how Microsoft would incorporate these other pieces into the company.

For now, this is nothing more than the latest rumor. It’s worth noting that each time a rumor surfaces, it seems that the SFDC share price spikes, so take these rumors for what they’re worth. It seems unlikely any of these companies would buy an entity as big as SFDC with so many moving pieces.

It would be a difficult merger from so many perspectives and Salesforce is the king of the cloud companies — the granddaddy of the market. How would the quintessential enterprise cloud SaaS company being folded into one of the traditional enterprise vendors affect the entire market. It’s impossible to know.

But we know this much. This is nothing more than a rumor and, until we have something more definitive, take it lightly.