As the mobile developer ecosystem has evolved, one thing that hasn’t gotten much easier is testing an app across the range of devices on the market. There are more phones from more manufacturers running more variations of the underlying operating systems — all factors that can contribute to bugs.

Disrupt NY 2015 Startup Battlefield contestant Nativetap.io has built a system that allows developers to test and debug their apps from a single iPad or Android tablet, yet see a pixel-perfect representation of what their app would look like on a variety of devices.

If you’re just getting started on an app, you can send your APK (Nativetap only works with Android for now) to the service and boot it up on a virtual machine mimicking the device you’re looking to test on. On your tablet, you’ll see a device that looks like the device you chose, with the same number of pixels as the device rendered on your display at the same size as the device’s screen.

This kind of testing is helpful for when you’re still figuring out what your app will do and the look you’re going for, but eventually you need to see how it’ll perform on real phones in customers’ hands.

For that, developers tend to either buy their own devices (usually just the most popular ones) or hand off bug testing duties to an outside company with hundreds of devices on-hand. Nativetap has built a solution for developers who’ve reached this stage, too: using the same tablet app, they get a live stream of their app running on an actual phone located in a data center. 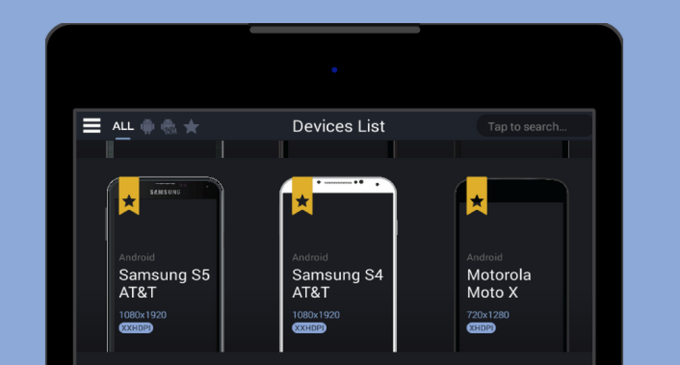 Nativetap currently has 20 devices running in its data center, but plans to bring in 50 during its limited rollout before expanding to many more as it launches more broadly. While you’d think they’d just buy several of the top-selling phones, not every developer is aiming at the customer that buys the latest-and-greatest phone. In their home market of Poland, for instance, developers tend to aim for the mid-range. As the team builds up its collection of devices, it’ll rely on input from customers to decide which devices to buy in large groups.

Developers building for the most popular phones won’t be able to test on the physical devices on-demand. Rather, Nativetap has a queue system where they’ll be able to schedule a specific amount of time with a particular device.

Here’s a slightly tightened-up transcript of the Q-and-A session after Nativetap’s presentation:

Can you talk more about automating tests about many devices?

You can touch on one device and inject the touch event into other devices, so the test will work in real-time on several devices.

Are you able to share common issues across companies, once you’re facilitating testing on all these devices?

We have thought about it, but it is not a current focus at this time.

How many clients do you have today?

What’s the number one feature request?

How do you charge for this?

We see it as a SaaS model with different tiers of pricing where you buy a certain number of hours per month, with the price per hour falling with each tier. At higher tiers, you’ll be able to schedule specific times with devices and get first pick on the popular ones.