PayPal is rolling out seamless, one-touch payments across the web, allowing customers to checkout from a merchant’s website without having to enter in their user ID and password again. The system, called One Touch for Web, is an expansion of PayPal’s earlier efforts on mobile.

Last fall, the company announced the general availability of One Touch mobile payments at TechCrunch Disrupt, which then introduced an easier way for consumers to shop and pay on mobile devices. On mobile, the platform was built using technology from PayPal acquisition Braintree, and was initially found in a number of applications including those from Jane.com, ParkWhiz, StubHub and Threadless, for example. Today, others such as Airbnb, Lyft and Munchery, are also using the system with some reporting a 50 percent increase in conversion.

“With One Touch, the biggest issue merchants face is this huge fall-off in conversion, especially on mobile,” said Bill Ready, the senior vice president of Merchant & Next Generation Commerce at PayPal. “And the majority of purchases still happens on the mobile web, so this is pretty important.”

The idea was that with One Touch, customers wouldn’t have to continually enter in their username and password each time they wanted to pay using PayPal – that information would be stored and shared between supported apps.

One Touch made sense as a mobile-first product, because entering in information on smartphone’s small screens is even more tedious than than it is on the desktop web. In fact, Ready once noted that more than half of e-commerce shopping experiences take place on mobile devices, but only 10 to 15 percent of purchases were occurring on mobile. The drop off had a lot to do with how complicated it still is to checkout on mobile. 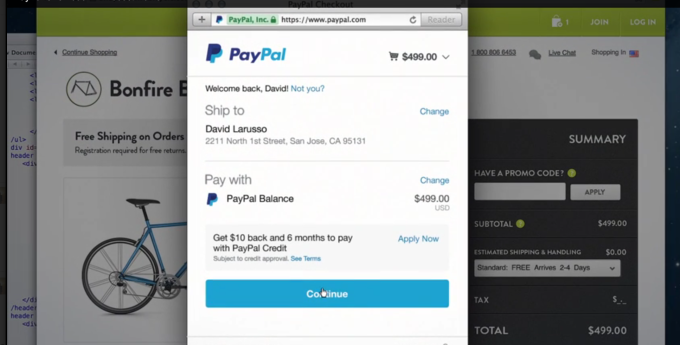 With One Touch for Web, online shoppers will only have to enter their username and password the first time, and afterwards, they’ll be able to pay on other merchant sites without having to re-authenticate with PayPal.

The system will be automatically enabled for most of PayPal’s current merchants..

“For the millions of merchants that use PayPal, the majority of them won’t have to do any extra work to get this,” Ready said. “This will just work.”

In total, 165 million PayPal customers will soon be able take advantage of the new feature, the company says. As reported earlier this month during eBay earnings, PayPal’s net total payment rose 18% to $61 billion, and added 3.6 million new active accounts in the quarter.

The move comes at a time when rival payments platform Stripe has made serious advances in acquiring customers of its own, in some cases, away from PayPal. The company says it now processes billions of dollars annually for thousands of businesses, including well-known web brands like Rackspace, Shopify, Reddit, Foursquare, Dailymotion and others. It’s also powering marketplaces via Stripe Connect for companies like Lyft, Kickstarter, Indiegogo, TaskRabbit, Fancy and more. And thousands of apps today have integrated Stripe APIs and payment service, including Twitter and Facebook.

PayPal’s OneTouch for Web is arriving today in the U.S. but will expand internationally in the months ahead.