The Disrupt NY 2015 Hackathon kicks off Saturday at noon and we’re excited to announce the judges and API workshops for the event.

Tarikh Korula is returning to reprise his role as the Hackathon MC, along with TechCrunch’s own Sam O’Keefe. Tarikh is the co-founder and CEO of Seen, a platform to reveal instant summaries from the real-time web. Before founding Seen, Tarikh was a winner at Yahoo’s first open Hack Day and his hack, ybox, lives on as open source hardware kits.

A native New Yorker, Tarikh previously co-founded the pioneering design firm, Uncommon Projects, which built mobile, web and tangible products for Fortune 100 companies including Yahoo! and Microsoft. Korula is a member of root at Hacker Union and has been instrumental in helping to develop and shape TechCrunch’s hackathons, beginning with their first in 2010.

And now for the illustrious judges joining us for Hack presentations on Sunday.

Lisa is the co-host of StartUp, a documentary-style, serialized podcast focused on entrepreneurial life. The podcast is produced by Gimlet Media. Before joining Gimlet, Lisa worked as a senior editor at FiveThirtyEight, Nate Silver’s re-launched site at ESPN. She has also reported for NPR’s Planet Money, This American Life, Marketplace, and New York Public Radio. She has a BA in applied mathematics from Brown and an MBA from Columbia. 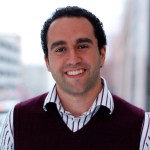 Haytham is the cofounder of Kinetic, a wearable device startup aiming to reduce costly injuries amongst industrial workers. He was the director of City College’s Zahn Innovation Center, NYC’s first hardware startup incubator and is the founder of the NY hardware startup meetup. His professional experience includes developing medical robotics at both Philips Electronics and Harvard Medical School.

Haytham has a PhD from Imperial College London and a Mechanical Engineering degree from University of Navarra in Spain. He also reviews theater for the blog site Theatre is Easy and loves to do improvised comedy, although admittedly he’s not very good. 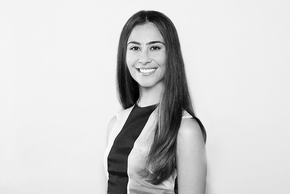 Jodie is the Co-Founder and Co-Chief Creative Officer of Shoes of Prey. From a background in advertising and law, Jodie now applies her communication savvy and sense of style to her true passion: outfitting women around the world in beautiful shoes. Her role encompasses product development, public relations and being the global face of the brand. 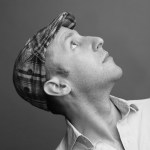 Benjamin is a General Partner at HAX, the world’s No. 1 accelerator for hardware startups. With 15 years experience across China, Japan, Korea and US, he is a recognized expert on innovation ecosystems.
Benjamin is also an angel investor in 12 startups and a frequent speaker in tech events such as TEDx, SXSW, LeWeb, TechCrunch Disrupt, GMIC, as well as an occasional lecturer at Berkeley and Stanford. He speaks English, Japanese, Mandarin, Korean and Spanish with a French accent. 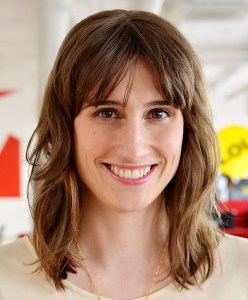 Katie Notopoulos is a senior editor at BuzzFeed News. Since joining the editorial team in 2012, she has covered internet culture and technology, and co-hosts the new BuzzFeed’s Internet Explorer podcast. Katie has also written for Gawker, The Verge, Modern Farmer, The Fader, Paper Magazine, and BusinessWeek. She is one of the organizers of IRL Club, a Brooklyn-based speaker series about the internet. She first saw the dress as white and gold, but then saw blue and black. Taylor Swift once favorited one of her tweets. 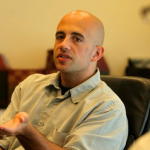 A veteran member of our Hackathon judging crew, Charlie O’Donnell is the sole Partner and Founder at Brooklyn Bridge Ventures and loves it that way. The fund makes seed investments and the first venture firm located in Brooklyn–where he was born and raised. The longest he has been outside of the five boroughs of New York City is three weeks.

Charlie has a reputation for being early to identifying important companies. Nick Bilton identifies him as an influence on early Twitter investors in his book, Hatching Twitter. Dennis Crowley credits him as having helped kick off the first funding of Foursquare before other VCs had said yes. At First Round Capital, he sourced the firm’s investments in Singleplatform (sold to Constant Contact) and GroupMe (sold to Skype). Charlie discovered GroupMe at the hackathon where the service had been built. He also sourced investments in Backupify (which was an idea he had tweeted to the founder, a friend of his), chloe + isabel, Refinery29, Docracy, and Salescrunch.

MasterCard offers many different types of APIs in the areas of payments, security, and data. Here are a few examples:

Simplify Commerce: An API that makes it easy to accept e-commerce and mobile commerce payments, regardless of payment brand, in a matter of minutes.

Places: An API to access our Places dataset, which is fed by near-real time, anonymous transaction data, at tens of millions of MasterCard accepting locations.

MasterPass: Enable consumers to enjoy a faster online checkout experience by retrieving their payment card and shipping information from any digital wallet in the MasterPass network

Come learn how to build an app for over 400 million users across Outlook.com, Office 365, Outlook for PC and Mac using a single set of APIs!

Using the new Outlook REST APIs, you can access Outlook Contacts, Messages or Calendars quickly and easily from any platform. Become one of the first partners with API access to Outlook.com or Integrate with Office 365 Groups to build rich collaboration applications. Leverage Web Hooks to build event-driven mail, calendar, and contacts integrations for your users across Office 365 and Outlook.com. Get started quickly and easily with our SDK’s for iOS, Android, Node.js and Ruby. Or use CORS and JavaScript to build an application in Angular or your choice of web framework.

Using the Outlook Add-In platform, you can use HTML and JavaScript to easily extend the Outlook user experience and integrate with your service across web, on the PC, Mac, or mobile. After you build your application learn how to leverage the Office Store to drive awareness of your integration to the hundreds of millions of Outlook users worldwide. Visit http://dev.outlook.com for more documentation details.

Hackaday.io is the single largest online platform for collaborative hardware project development. Launched a little over a year ago, the Hackaday platform is currently home to more than 5K hardware projects and over 64K registered users, primarily “creative” engineers from a wide range of hardware and software backgrounds. It’s a project-centric “social network” for hackers built by hackers.

Hackaday.io API, which is officially launching at this API Workshop, allows a programmatic way of interacting with all aspects of the Hackaday platform. You can search for projects and engineers matching arbitrary criteria (“find all FPGA projects built by engineers in New York City”), create project forks, and automatically populate project build logs. You can retrieve all of the project and user information and generate a corresponding “Hacker Graph.”

You can build entirely new user experiences based on this platform, and integrate it with other versioning/project collaboration systems. Or you can just use the built-in messaging system to chat to and control your latest “IoT” hardware project.

This API is built for creative abuse, and we’re excited to see what kind of projects you’ll be able to build on top of it.

9:30am – Hacking concludes and hacks submitted to wiki

10:00am – General public welcome to enter to attend hackathon presentations

2:00pm* – Hackathon will conclude with final awards and recognitions will be provided by the judges. *The final awards may be held earlier or later depending on the duration of hack presentations.

Grab your tickets below. They go quickly, so hurry!