India is currently undergoing an e-commerce boom — at least in terms of investment. The latest startup to pull in bags of investor cash is Craftsvilla, an e-commerce site for ‘ethnic products’ that is probably comparable to Etsy if you seek Western points of reference.

Craftsvilla just announced its $18 million Series B funding round, which was led by Sequoia Capital and included participation from Nexus Venture Partners, Lightspeed Venture Partners and Global Founders Capital. A valuation was not disclosed.

The Mumbai-based company was founded in 2011 by CEO Manoj Gupta, who — then a VC with Nexus, which invested in retail powerhouse Snapdeal — observed the rise of online commerce and decided to jump into the space himself as an entrepreneur.

“The thesis was that India is so rich in culture and diversity and there are so many unique products across the country, [but] a serious attempt to bring that online on a single platform had never been done,” Gupta told TechCrunch in an interview.

Craftsvilla is comparable to Etsy, but Etsy it is not. Rather than focusing on handmade products like the U.S. firm, Gupta said Craftsvilla is about showcasing ethnic merchandise, such as saris, handicraft, jewelry, spiritual products, or music instruments. 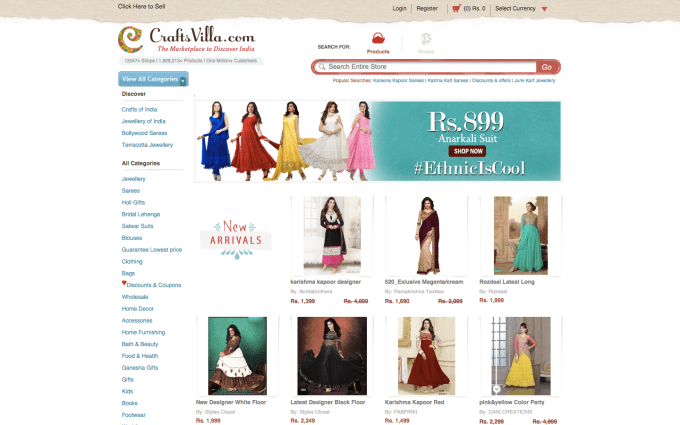 Craftsvilla is closing in on 2 million products from nearly 12,000 merchants, and Gupta said the numbers have grown organically without spending on marketing.

Interestingly, 95 percent of customers are based within India, while a whopping 90 percent are female. Logistics and additional costs make international sales trickier, Gupta explained, but the company recently passed the cost of overseas delivery to merchants — who can factor it into pricing — which he believes will help.

That said, Craftsvilla isn’t targeting a global audience, India is the primarily focus. Gupta does, however, plan to expand the business into countries in Southeast Asia, where it will maintain its focus on selling local, cultural products to domestic consumers. To that end, the company has begun tests in Malaysia — but country expansions aren’t likely to happen until next year. (Gupta told us that he is also open to acquisitions to enter new markets.)

The funding will go towards marketing the site to mainstream consumers in India, advancing the company’s tech and also hiring. Craftsvilla has a team of 50 based in Mumbai. Gupta told us that it has kept margins low and is “close to profitability” thanks to its thrift — that’s in stark contrast to India’s most prominent internet startups, which are burning through capital.

Right now, Craftsvilla has $4-5 million GMV per month, but it is aiming to increase that figure to $20 million by the end of the year. 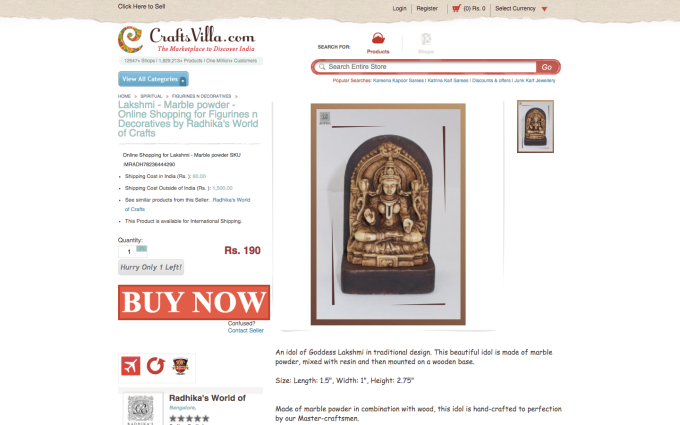 It is early days, but Gupta said he believes that Craftsvilla has the potential to grow beyond Asia and into other parts of the world, maintaining a local focus all the while. He isn’t too concerned that Etsy has taken that mantle because he sees fundamental differences between the two.

“Our vision is very big, we want to be a $10 billion valued company and make a big impact in the ethnic space… we want to be the destination for anything ethnic,” he explained. “Etsy is about handmade but it loses a lot in the ethnic culture area. [Our products] don’t necessarily need to be handcrafted, but [they are] ethnic in nature.”

Gupta is already thinking about a future round in the region of $100 million to push Craftsvilla to the next level. Though, he said, that’s in the back of his mind and he isn’t yet actively raising.