Facebook failed to beat earnings estimates in Q1 2015, coming in with mixed results after 10 straight quarters of beating them. Its revenue of $3.54 billion fell short of its $3.56 billion estimate, though it exceeded the 40 cents EPS estimate with 42 cents.

In the release, Facebook blames fluctuating foreign exchange figures, including the weakening euro versus the dollar, for the missed revenue, saying it would have made $188 million more in revenue this quarter and and beat estimates if not for this issue. That would have let it easily beat on revenue with $3.728 billion. Several other public companies have made similar claims blaming the euro. 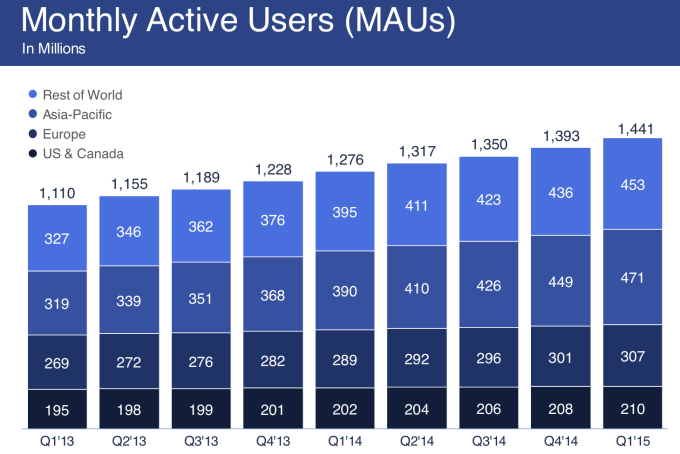 On mobile, Facebook reached 1.25 billion mobile monthly users (up 5%), and 798 million daily mobile users (up 7.1%). While the mobile monthly growth rate slipped a bit from 6.2% last quarter, the more important daily mobile user growth rate grew from 5.97% last quarter. That means Facebook might not be signing up casual users quite as quickly, but its turning more people into non-stop social networkers. 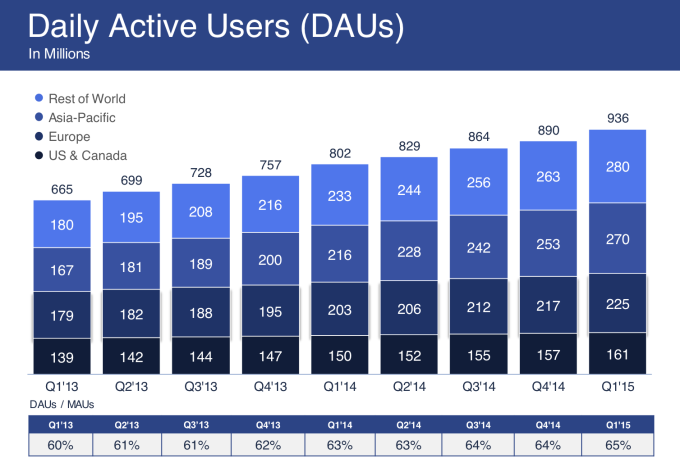 Ad revenue hit $3.32 billion in Q1. Mobile now accounts for 73% of ad revenue, up from 69% last quarter. Facebook’s daily video views grew to 4 billion, up from 3 billion in January. The more organic video views Facebook gets, the more paid video ads it can seamlessly slide into News Feed. And with the enhanced video ad targeting from its LiveRail acquisition, and the vividness of the medium, Facebook has huge potential to grow ad revenue through video.

Facebook’s continued user growth despite its massive size, and its ability to turn volunteered personal information into ad targeting data help keep its business relatively strong despite coming off the holiday quarter. Versus Q1 2014, this quarter’s revenue was up a massive 42%. On mobile, app install ads are thought to be a particularly large money maker as developers are desperate to get their apps discovered outside of the crowded app stores.

Q4 was the holiday season where competition for advertising space and big campaigns jack up ad revenue for Facebook, so a decline isn’t totally unexpected. It appears that ad revenue dips of over 11% in the Europe and Rest Of World regions were predominantly responsible for the decline.

One alarming figure is Facebook’s decline average revenue per user (ARPU) in the Rest Of World region that includes many developing countries where its user growth comes from. Ad ARPU in the Rest Of World declined 15.2% this quarter from $0.92 to $0.78, falling even lower than in Q3 2014. For Facebook to keep revenue growth strong as it runs out of users to sign up in key markets to sign up and has to rely on the developing world for user count increases, it needs to figure out how to squeeze more ad revenue out of people with little buying power. 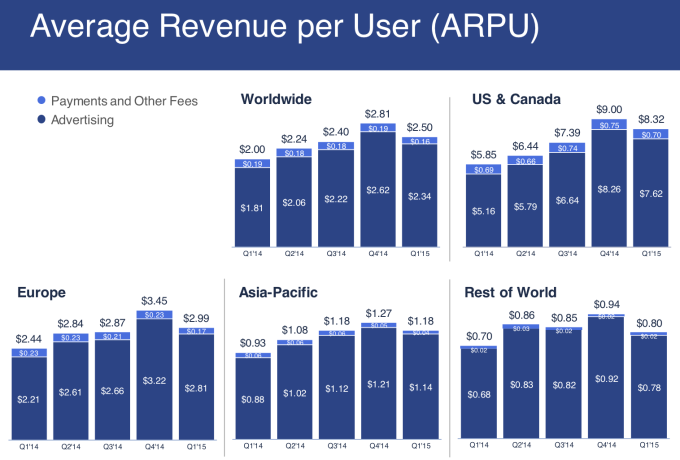 Overall, Facebook’s earnings look very healthy despite the miss on revenue. For this late-stage of a public company, increasing revenue 42% year over year on 17% daily user growth is remarkable. It’s a testament to just how ridiculously good Facebook is getting at ad targeting.