If there’s any doubt that Netflix doesn’t want to just augment your cable TV subscription, but actually desires to replace it outright, then look no further than today’s news of the streaming service’s intention to reboot the classic 80s-to-early 90s comedy “Full House,” under the new, oh-so-creative title, “Fuller House.” The spin-off, deemed by some as nostalgia at its worst, panders to Netflix’s core demographic – the Gen X’ers and millennials who still fondly recall time spent viewing the treacly sitcom that headlined ABC’s “T.G.I.F” line-up back in the day when appointment TV was a shared cultural activity.

The premise of the 13-episode reboot involves catching up with the children as they lead their adult lives. Where it once could be argued that the original “Full House” broke ground in showing men taking on the traditional female parenting roles (the three daughters were raised by widowed dad Danny Tanner and male family members), the reprised show simply uses tragedy as an idle nod to its series of origin. Now it’s D.J. who has been widowed, for whatever reason, and friend Kimmy is a single mom. (A show about single moms is clearly fresh and rare?)

But never mind that: the Internet buzz around “Fuller House” is trending toward being more positive than groan-inducing, sadly, according to social analytics provider Topsy, which has assigned “Fuller House” a sentiment score of 59 out of 100 based on the day’s tweets and other shares.

Still, it’s hard to fathom that the same service that has delivered critically acclaimed favorites – and award winners – like “House of Cards” and “Orange is the New Black” – is now grabbing at low-hanging fruit – 1980s nostalgia – to attract viewer interest.

But to deem “Fuller House” as beneath Netflix’s dignity, as Vanity Fair did, misunderstands Netflix’s intentions. The company doesn’t only want to offer top-of-the-line, quality adult franchises – it wants to offer anything and everything a family could want. And that includes content for the kids, too.

Yes, my fellow 30-somethings,”Fuller House” is not actually meant for you. It’s for your children.

Netflix knows that the built-in brand recognition that comes with the new show means parents will likely allow their children to watch, and will be happy to do so. Just as they’ll allow them to watch Netflix’s “Care Bears and Cousins,” which arrives sometime in 2016. Or “Richie Rich,” a Netflix Original which debuted this year. Or “The Magic School Bus 360.” Or any of the spin-offs from Netflix’s DreamWorks Animation deal, which saw the service gaining the rights to popular kids’ characters like that lemur from the “Madagascar” movies or the Puss in Boots cat from “Shrek.”

Competitors like Amazon, on the other hand, have been rolling out kids’ originals of their own but are faced with having to introduce new characters and otherwise unknown brands like “Tumble Leaf” or “Annedroids” or “Creative Galaxy” to their audience.

Netflix, on the other hand, is betting on the fact that well-known characters sell, and being able to tap into subscribers’ sense of nostalgia is just icing on the cake…Sweet, delicious, potentially very profitable icing. 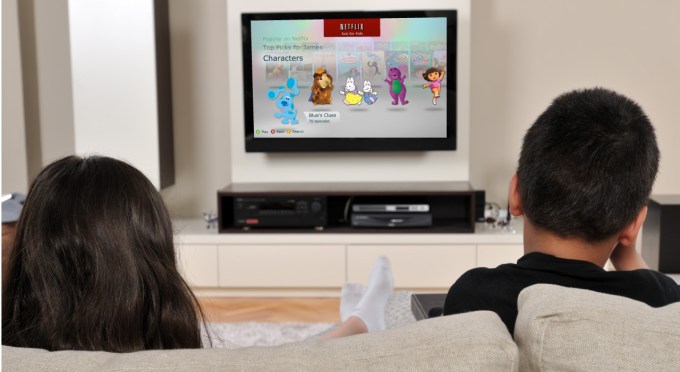 And let’s be fair –  Netflix is not alone in its efforts to dust off our memories in exchange for our cash: its move is part of a larger industry trend to reboot classics, which has more recently included other networks’ efforts at bringing back Twin Peaks (Showtime), The X-Files (Fox), and The Muppet Show (ABC), to name a few.

Meanwhile, as the networks wage their nostalgia wars, Netflix’s expansions into more family-friendly content will see it also taking on traditional kids channels like Disney or Nickelodeon, who today target younger, mobile viewers with on-demand apps (and Nickelodeon more recently with its own over-the-top streaming service Noggin).

But Netflix doesn’t limit itself to only serving the younger demographic or only the grown-ups. Netflix can be a unique channel for every one of its viewers, whether four, 14 or 40.

For what it’s worth, Netflix’s strategy has been working. Nielsen last November found that after people sign up for streaming video services, they then watch less TV. In the 18-34 year-old demographic, they watch 20 percent less TV. In the 25-54 year-old demographic, 19 percent less. TV viewing also declined by 7 percent year-over-year as of October 2014, the firm noted, as streaming subscribers grew from 34 percent in January 2014 to 40 percent by September.

So if Netflix is out to replace TV – or at the very least, drastically cut into traditional TV viewing – then it has to have all types of content. Even things like “Fuller House.”