Following its acquisition of live streaming app Periscope, Twitter has been actively fighting to make sure its service beats that of independent competitor Meerkat, which had a slightly earlier start. In recent weeks, Twitter has made changes to cut off Meerkat’s access to Twitter’s social graph, and even began pushing celebrities and publishers to stop using Meerkat. Those efforts appear to be paying off for Twitter, according to new data out now, which shows Periscope leading Meerkat by nearly half a percentage point in terms of monthly active users on iOS.

The rival services, which both offer apps that allow users to broadcast live from their smartphone directly to Twitter, have been battling for consumers’ attention while quickly rolling out improvements to their respective apps. Last month, for example, Meerkat introduced new discovery features and recommendations, while Periscope’s more recent update made it easier to find broadcasts from friends.

And just today, Meerkat has one-upped Twitter again by being first out of the gate with an Android app, though access is still invite-only at this point.

Twitter, however, still has the advantage as it controls the platform and, as a larger, publicly traded company, already has the resources to court the celebrities, media companies and others who could help make its platform a success. Plus, if need be, it could even strong-arm customers and other brands into using Periscope by cutting off their access to ad products like Amplify if they chose to work with Meerkat instead.

And of course Twitter also has vastly more resources to throw at Periscope, from an engineering, marketing, and recruiting perspective. 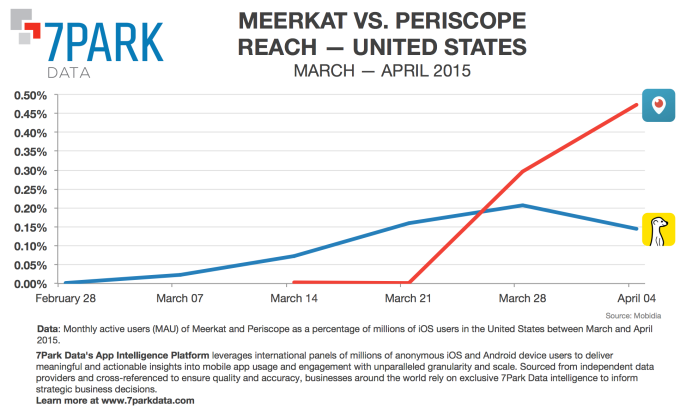 Now it appears that Twitter’s aggressive tactics have been working. Periscope overtook Meerkat in terms of monthly active users during the week of March 22nd. At that point, Meerkat had a 0.2% reach on iOS and Periscope had a 0.3% reach, according to data from 7Park. “Reach,” in this case, is defined as the monthly active users the app has, as a percentage of millions of iOS users in the U.S. between March and April 2015.

The following week, the gap between the two apps widened, as Meerkat’s reach slipped to 0.1% and Periscope climbed up to 0.5%.

However, it’s worth pointing out that in the grand scheme of things, these numbers are still low. The two services are battling over a very small audience, compared with other social applications. For comparison’s sake, Twitter reaches around 19% of U.S. iOS users while its Vine video app reaches 5.4%. And Snapchat tops them all with a 29.8% reach.

That being said, growing to even half a percentage point in a matter of weeks is a strong launch for a new app, and it’s likely that Periscope will continue to grow in the months ahead, especially with Twitter’s full efforts behind it. 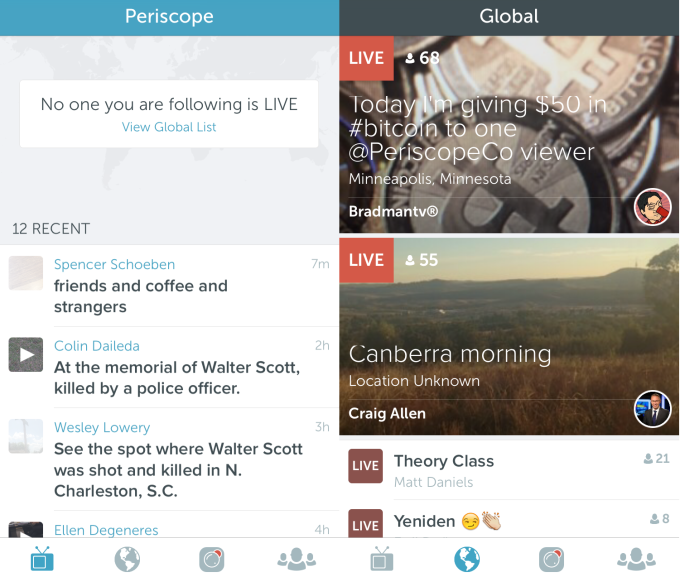 With mobile social apps, many believe it doesn’t have to be a winner-take-all market. But that’s not the case with Twitter’s Periscope. Video is expected to be a major part of Twitter’s future, and its own live streaming platform has the potential to be a lucrative source of new ad revenue as well. In addition, the service gives users a new way to engage with Twitter – something that could help the network increase its active user numbers, time spent using its apps, and the number of logged-in users.

That latter item could address a long-term pain point for the company. Twitter historically has had trouble getting new visitors to convert to registered users, as many use the service more passively only to read tweets from news media or public figures like politicians, celebs, sports figures, and other influencers. Just yesterday, in fact, Twitter rolled out a new home page designed to cater to those who don’t have a Twitter account yet or who aren’t signed in. The updated landing page lets these logged out users view top tweets by category – giving them a way to interact with the service before setting up an account.

The hope, on Twitter’s part, is that these visitors like what they see on the new site well enough to actually join the service. And the new page also gives Twitter a way to better track its visitors who aren’t registered users. Of course, it’s easy to imagine how a section focused on popular live video streams could make its way to this page in the future, too.

For Meerkat, going up against Twitter may end up being a lost cause – but the app’s early popularity and the technical chops of its team could make it an acquisition target for other major players who want to participate in the live streaming trend, like Facebook perhaps. What is clear is that in Meerkat’s battle with Twitter, it’s still got a big fight ahead.