It’s rare that a company can hire 600 employees, raise $450 million in funding, reach $100 million in annual sales, and still say it’s in stealth mode. But Domo, the brainchild of Omniture co-founder Josh James, is no ordinary startup.

The company, which was founded nearly five years ago, has quietly built a platform for collecting, normalizing and visualizing business intelligence data from an incredibly wide range of sources. The idea is to make all that information available in real-time and giving executives the ability to get a completely transparent view into what’s happening throughout their companies.

Domo is able to do that by hooking into more than 300 different data sources. That includes everything from your typical CRM platform like Salesforce to expense management systems like Concur to corporate social media accounts on Twitter or Facebook.

With all that data, end users can see how different parts of the business are operating. And the platform has something for everyone, depending on the type of business and an end user’s job.

For example, brands can use Domo to view how effective their advertising and social media campaigns affect online engagement, while e-commerce companies can track conversion rates and abandoned cart values. Sales teams can keep tabs on which employees close the most deals and allocate leads more effectively, while finance departments have access to a more granular view of their balance sheet in real time.

But most importantly, high-level executives get a fully holistic view of how an entire company is operating. Domo founder Josh James says that 70 percent of deals it’s closed have a CXO involved, and the CEO of about half of all its clients ends up using the platform.

“A platform like this doesn’t exist today,” James tells me. “We’re the only ones that do anything remotely similar to this.” 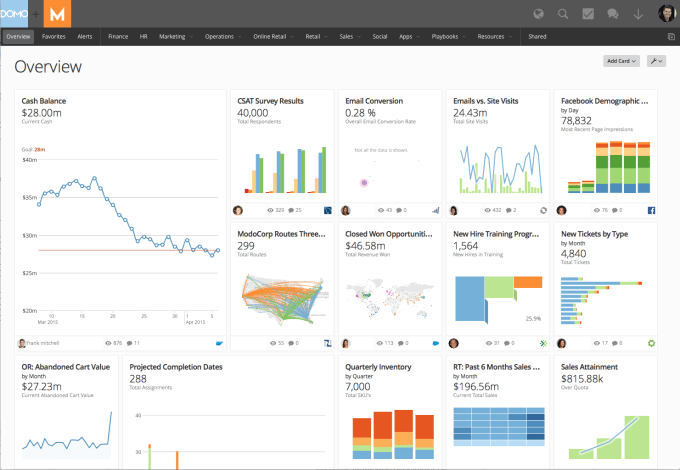 What a C-level exec might see in their Domo dashboard

Domo’s customers seem to agree. Even without being available to the public, the platform has attracted more than 1,000 clients who pay $2,000 per user per year (and a minimum of $25,000 each) to access a highly customizable dashboard that can be programmed to display practically any type of data they might find valuable.

Those clients range from the mid-market to Fortune 10 conglomerates that use Domo’s platform to track, manage and make decisions around what’s happening in all levels of their business. James says the company is on track to do more than $100 million in sales this year and is expected to double again in 2016.

But given all that success, how has Domo managed to keep what it’s been doing under wraps? With a lot of NDAs, according to James.

Until today, customers who wanted to access its dashboard worked with Domo sales and support staff to get signed up and running. But first they had to agree not to share what the company was working on with anyone else.

That secrecy might sound extreme, but it served a purpose — while James says his CMO and head of sales initially balked at the idea, keeping quiet about what they were building enabled Domo to get a huge head start on the competition.

He says being in stealth “created a lot of buzz about the company… and it’s never a bad thing when people are interested in what you’re doing.”

But after years spent building and refining its platform to get things just right, Domo is finally ready to open up to new clients with a self-service model for signing up. The company is announcing all this at its own little customer conference called — not kidding — Domopalooza.*

(Keynote speakers at Domopalooza include James, Facebook COO Sheryl Sandberg, and Oakland A’s GM Billy Beane. There will also be an after-party with performances by Ludacris and Robin Thicke.) 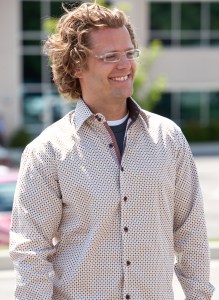 Along with the full public launch of the business analytics platform, Domo is also announcing another huge new round of funding. It’s bringing on $200 million in Series D financing led by BlackRock, with Capital Group, Glynn Capital, and previous investor GGV Capital participating.

The new funding values the company at $2 billion, which is up from an $825 million valuation during its last round a little more than a year ago.

That’s pretty rich for a product that hasn’t even fully launched yet. But it has a nine-figure revenue run rate already, and still has a ton of growth to come from new clients who can now sign up without going through Domo’s sales and support team.

And let’s not forget about the fact that this thing is run by Josh James, the guy who built Omniture from scratch, took it public, and sold it to Adobe for $1.8 billion back in 2009.

Investors no doubt are betting on another big exit, and so is James. In our phone conversation he said Domo already had a management team in place that could manage a $5 billion in revenue. That would put it on par with Salesforce, but James thinks Domo could be even bigger.

“We want to make this a $50 billion revenue business,” he said.

==
* I seriously thought they were kidding the first three times they said the word ‘Domopalooza’.