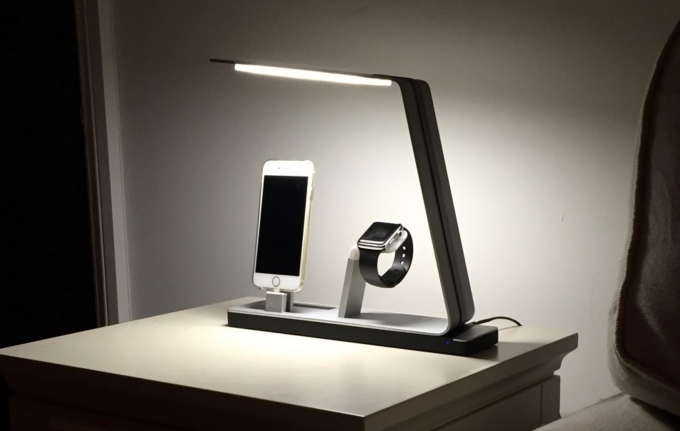 One of the chief concerns people have about the imminent Apple Watch is that it’s another device they have to charge every day. While we’ve gotten used to plugging in our phones, tablets and laptops when they need topping off, the addition of one more gadget is apparently a bridge too far.

Of course, one way to reduce the hassle of having that extra device to deal with as you get your gadgets ready for the next day is to make charging all of them a single process.

Some people do this by creating a designated charger space in their home — a kitchen counter, a desk that isn’t used for work very often — and bringing all of their gadgets to that spot to charge at the end of the day. That’s basically my plan for the Apple Watch (which I’m getting to test all of the awesome apps coming from developers over the months to come). I’ll plug in my phone and Apple Watch to the same outlet at the end of the night, right next to my bed since I use my phone as an alarm.

Instead of leaving two wires dangling freely next to my pillow, I’ve decided I’m going to upgrade my spot with a dedicated charger dock that’s currently up for pre-order on Indiegogo.

Pictured above, the MiTagg NuDock is a power station for your phone, watch, an included portable battery, and a third device via a hidden high-power USB port. It’s made from brushed aluminum and will come in the same silver or space gray colors as Apple’s phones and laptops. There’s also an LED lamp with touch-sensitive dimmer controls, which is exactly why I’m getting this for my bedroom.

Unfortunately, it’s not an MFi-certified device, so the Lightning connector isn’t built in. When you first get the station, you have to slide a Lightning cable through the dock to get the charger setup. Same thing for the Watch’s charger cable. But once you’ve done that, you can just drop your devices on the stand when it’s time to charge for the day — the dock supports any iPhone case and the Apple Watch’s inductive charging means you won’t need to fiddle with lining up the cable with a tiny micro-USB port as with some Android Wear watches.

In addition to the power station itself, the NuDock comes with the NuKi, a 2,000 mAh portable battery you can carry with you to keep your phone topped off over the course of a long weekend or a day of intense usage. On top of the sheer utility of a keychain battery, it also has some nifty smart features — you can use it to find the keys it’s attached to from an app on your phone, and use a button on the side to control the shutter in your camera app from a distance.

The NuDock is set to ship in July, so you’ll have to go a few months without one after receiving your Apple Watch. The early bird special is going for $129 on Indiegogo, but that will soon go up to $149. If you’re planning to skip the campaign to see feedback on shipping units before buying, MiTagg says the final retail price will be $249.