The intent of the new initiative is to put IBM at the forefront of the Internet of Things and provide a common platform on top of which customers can build useful applications to take advantage of all that data. IBM suggests that partnerships like the one with The Weather Company and the one announced last year with Twitter are the cornerstones of a strategy to put them on the cutting edge of a burgeoning technology.

They are not alone in this endeavor, however. GE has its own Internet of Things platform aimed at the industrial internet, called Predix. The two giants are battling it out for the hearts and minds of developers.

IBM has actually had several pieces in place for some time, but it has been fragmented, says Joel Cawley, GM for information and Insights as a Service at IBM. With this announcement IBM is trying to provide a consolidated package of services to build Internet of Things applications.

The package includes analytics, a special zone of its own on BlueMix — IBM’s Platform as a Service offering — and expansion of what they call their ‘IoT ecosystem.’ The latter is a set of partners such as AT&T, ARM and The Weather Company.

“When I think about this, my business is building service delivery environments. We have been looking for a handful of anchor tenants. Twitter and The Weather Company are great anchor tenants. We can build a lot of stuff around this,” Cawley said.

And he hinted that these two partnerships were just the beginning.

It gathers data from 100,000 weather stations around the world. Over time it will layer on information from cars and smart phones. It intends to combine all of this information to provide businesses with comprehensive weather data to make better decisions. 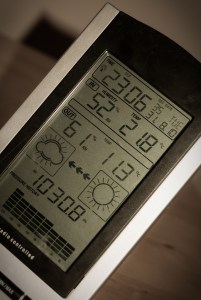 Insurance companies, power companies, and governments all need weather data to help proactively make better determinations instead of simply reacting to the weather after the fact. By combining The Weather Company’s data with IBM’s enterprise reach and platform knowledge, companies can build applications to make better use of this information.

“We are trying to translate weather into an outcome, a data product,” Gildersleeve explained.

Cawley’s purview is data, which makes sense because the information coming from these sensors is what drives the Internet of Things. Being able to use that data in real time before it becomes stale, is going to be key. This announcement is about IBM wanting to be in front of this, helping companies make use of the data in actual operational fashion.

He points to a project IBM did in China monitoring air pollution as something the company could package using the platform components and sell to other countries with a similar requirement. This kind of use case can show customers how they could build their own applications using other types of weather and atmospheric data.

Tonight’s announcement fits in with a much bigger picture of IBM’s strategies and priorities moving forward, whether it’s Watson processing big data, its cloud strategy or analytics. The partnerships with Twitter and Apple are key components too. It’s all part of a broader vision being driven from the top at IBM to transform the company for more modern enterprise requirements.

A key piece of this approach is building a platform play across the different categories and IBM wants very much to attract developers to this vision. It appears to be pushing the correct buttons and putting all the right pieces in place, but it remains to be seen whether it can really win the hearts of developers to really drive the company’s transformation.

Every company wants to be a platform play from startups to big corporations like IBM, but it takes patience and a quality offering to lure developers — much easier said than done.