Movies, financial markets and fashion trends all fall into frenzies, dips and lulls. Consumer apps are much the same.

Whether it’s photo-sharing, anonymity or live streaming, it seems that a confluence of apps all doing similar things at the same time is a natural occurrence.

Video apps Meerkat and Periscope are at the forefront of the present app zeitgeist, with the latter being acquired by Twitter months before the former took off. These apps leverage the higher quality phone cameras and faster mobile internet available in 2015 to accomplish what has been tried many times but never well: Building a better live streaming app.

And now we have quite a few promising ones: Meerkat, YouNow, UpClose and today, Periscope.

In 2009, after Periscope co-founder Kayvon Beykpour sold his startup Terriblyclever to Blackboard, he felt restless. He left Blackboard full time in 2013 and decided to travel. He ended up in Turkey’s Taksim Square.

This was right after the Gezi government protests, and Beykpour, who is Iranian, remembers being in his hotel room wishing for a view (a portal) into the world outside, or even into the street directly outside his hotel. “There were people with phones, with cameras walking past that street every day.”

He kept thinking about it, and when he returned home, he discussed it with his Terriblyclever co-founder Joseph Bernstein. “It should be possible to use your phone to give you a visual periscope into the world,” he told Joseph.

About a year later, Twitter co-founder Jack Dorsey found himself at a different set of protests, on the ground in Ferguson, Mo. He posted footage from the unrest on Vine and Twitter. We hear, apocryphally, that Dorsey wanted something beyond the text of Twitter and the six-second loop of Vine to capture the full spectrum of what was going on around him. Twitter and Vine simply cannot convey the feeling of “being there” that live video does.

Back in SF, Beykpour and Bernstein decided to work on what he had envisioned in Taksim Square. They raised $1.5 million from Founder Collective, Scott Belsky, Maveron, Google Ventures, Menlo Ventures, Bessemer, Stanford – StartX and Sam Shank in April 2014.

With the new coin, they set out to build an app that could record and broadcast live video from anywhere a phone was held, that also had an ephemeral element to it. Beykpour and Bernstein hired more engineers, moved into an office at 5th and Folsom in San Francisco, and got to work. They only shared their app with a few friends.

In November 2014, Kayvon was having coffee with his friend (and Twitter director of corporate development) Jessica Verrilli. He told her about Periscope, or “‘Scope” as some power users call it. 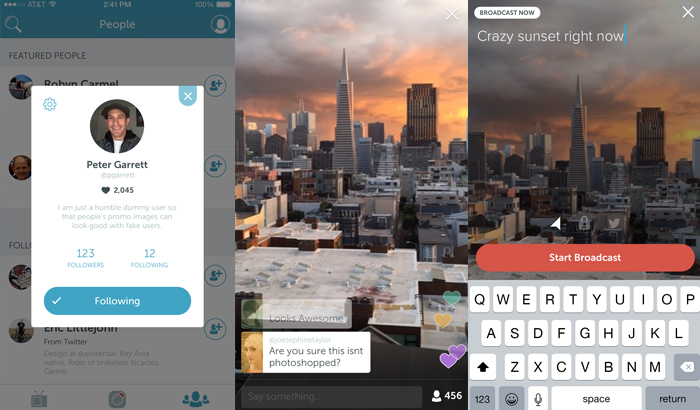 Beykpour was in. And over another coffee with Dorsey he saw the grand overlap and simultaneity of the products’ core missions.

“Our vision is similar to Twitter’s,” he says, in his new, multi-story office on Langdon Street in SOMA. “We’re trying to build a medium that gives you a pulse on what is happening in the world. Ultimately, that’s what Twitter is and what Periscope can be.”

Eventually both sides discussed marriage versus friendship, and decided on the former, with an acquisition deal closing in January 2015, a month before we reported that the companies were in talks. (Sources had told us both that the deal had already closed and that it was not yet closed, hence reporting “talks.” We’ve heard both $100 million and “a fraction of that” for the price of the deal, which included a hefty amount of Twitter stock.) 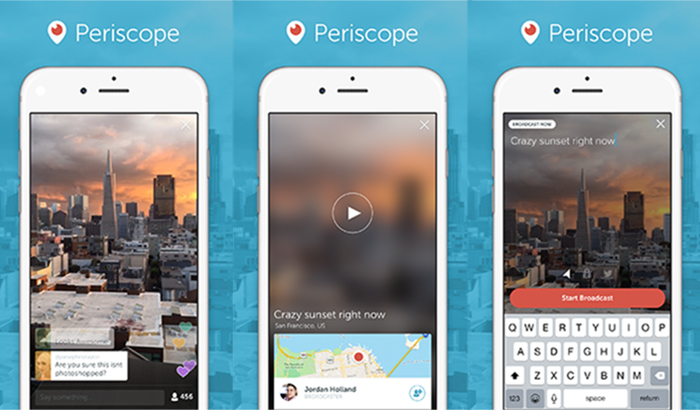 Now a part of Twitter, the 10-person Periscope team planned for an iOS launch in March, just a year after Kayvon and his co-founder started building the project. The Twitter acquisition did not influence the timeline.

And then Meerkat happened. The live-streaming app, which is uncannily similar to Periscope, went viral at the same time the Periscope team was prepping its final beta, seeding it with friends and friends of friends and Tyra Banks for some reason. The news that Twitter had acquired a competing live-streaming product to Meerkat came awkwardly close to the news that Twitter had shut Meerkat off from its graph. Periscope in its current incarnation has some notable differences from Meerkat. You can save your streams for others to replay, you can’t schedule a broadcast and Periscope chat comments aren’t automatically broadcast to Twitter. It’s also an attractive product.

It also allows you to automatically follow your Twitter friend graph, a functionality that Meerkat also had until Twitter pulled its API access. You receive notifications when people you follow are streaming, and can invite your followers to their streams. The dynamic also applies to people who are following you.

In order to control the trolls, a problem already rampant on Twitter, Periscope users can block other users, and if you block someone, they won’t see you in the system. You can hide the chat if it gets noxious, as well.

In addition to public broadcasts, which you can send to Twitter with “Live on #periscope [Title of your broadcast]” and a link, you can set up a private broadcast on Periscope by clicking the lock icon in the “Broadcast Now” screen. You then select which of your followers you want to include.

Perhaps its most delightful feature is that watchers can send colored hearts to broadcasters on a stream — the colors corresponding with those individual user avatars. “Oooh hearts!” is something that you see a lot on Periscope.

It seems as though the world is in a live-streaming event horizon: Streaming video actually streams. It’s 10x better than the initial crop of apps that launched and failed; products like Qik and Chatroulette. But considering the still-existent flaws, the time suck, the demands of synchronicity and the generally poor content, will it have to get 100x better before it sustains in the mainstream?

Beykpour acknowledges this risk, and is particularly attuned to the quality of content and video latency, which, on Periscope, adjusts itself based on your own connectivity.

“There is a range of latency that we want to strive for, primarily based on the broadcaster’s locations. If you’re in Kiev, you’re not going to get HD with two-second video. The goal is contiguous video … where the video quality is high enough, latency low enough, that you don’t think.” 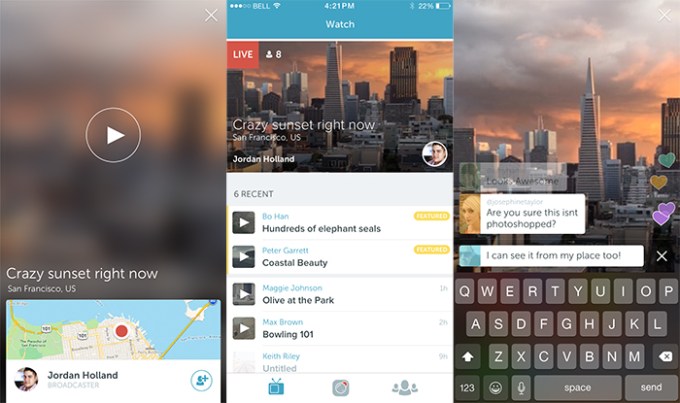 On the content side, “It comes down to a few things,” he says. “They’ll be exemplary people who you’ll just watch on Periscope, like (Italian singer) Rosario Fiorello, because they are hilarious and engaging. Not everyone is like that. But the magic of Periscope isn’t just broadcasting, it’s the interactivity.” On Periscope, the audience can influence the play.

Beykpour actually likens the experience to “teleportation” versus live streaming, and brings up an example of watching his friend Shane Periscope from a karaoke bar. Beykpour dared Shane to go onstage, and the next second Shane was belting out a song.

That thing where @kobebryant, @kevinjonas, and @ReneRedzepiNoma watched the funeral for your kids' fish. @periscopeco is coming.

Such is the case with Chris Sacca’s fish, Drama Llama, who wasn’t feeling so hot Saturday night, and by Sunday had gone to meet his maker. After soliciting advice on Periscope about whether he should tell his kids the truth about the fish’s death and getting mostly truthers in chat, Sacca held a very moving funeral for Drama Llama with his family by the seaside. “The video with the commentary and hearts is now our prized possession,” he told me in all seriousness.

Perhaps because of the intimacy and a UI that promotes empathy, poor content does not seem as much of an issue on Periscope. Since I’ve downloaded it, I’ve been absorbed in the sheer variety of content: astronaut Chris Hatfield singing “Space Oddity” with his knitted space dolls in the background; snippets from Drew Olanoff’s room as he undergoes chemo at UCSF; a group of older men singing over coffee in Italy; Tyra Banks “smizing”; Sophia Bush and her cousin discussing “The Jinx”; someone at an “epic” dog park; David Blaine doing magic tricks; Mario Batali cooking; Jack Dorsey watching a band at SXSW (“Live At Pappys”); and so on.

Sure, this was during a press push, but rarely does an app give you a whole new perspective on life. Periscope does.

It remains to be seen whether unleashing this app onto Twitter’s 288 million monthly active users will dilute the quality, or even further broaden and refine the perspective of what gets posted.

Even in a small beta we knew we had something special. Kayvon Beykpour

Of course, it is tough to build a successful live-streaming app, especially if you’re not the first mover in the space. Periscope waited long enough to launch and Meerkat has attracted Jimmy Fallon, Kevin Rose, Greylock Partners and myriad other high-profile users in the meantime.

Will leveraging Twitter’s scale and concurrency be enough to lure that community to Periscope? Periscope’s Replay option is a big deal here, as when new users onboard the app, they already see it populated with things to watch. That doesn’t happen on Meerkat.

In any case, it has huge potential: As a language-learning tool with chat translation, as a reporting tool for news organizations and, of course, as a way for citizen journalists to capture the next Taksim, the next Ferguson.

Of course Twitter has its own video tools in addition to its own video app, Vine, which Dorsey used to record some of the Ferguson protests. Beykpour has no plans to integrate with those products or monetize anytime soon, though he wouldn’t mind collaborating with the Vine founders. Vine was also acquired by Twitter while in stealth, but Twitter spokesperson Rachel Millner would not tell me whether “stealth acquisitions” were part of Twitter’s M&A strategy.

With fewer than 5,000 users in the beta, the overall vibe of Periscope is that of a scrappy app, despite it being the newest bright and shiny object at a large public company. Twitter has two problems, growth and activations, and Periscope can potentially help with both.

Beykpour tells me the decision to sell was not taken lightly. “Even in a small beta we knew we had something special. We wanted autonomy, our own office space and our own identity.”

It’s a litmus test of loving a new app when you build a laundry list of feature requests. From what I can tell, Periscope is by no means done. It needs landscape view for one, and the ability to watch old streams, and to access streams older than 24 hours — a remnant of its disappearing video roots. It also needs to be on Android.

“We have many future plans,” says Beykpour, and then, as a joke, “[For starters] we’re going to build every feature that you’ve requested.”

But it has a fighting chance. And perhaps the best indicator of that chance is the feedback from Meerkat founder Ben Rubin: “The Periscope team did a good job, they have a good product, and deserve a lot of luck and success.”

Disclosure: I own less than 500 shares each of Twitter, Yahoo, and Aol stock.