Amazon’s Angie’s List competitor, called “Amazon Local Services,” has been rebranded as “Amazon Home Services” ahead of a larger launch happening Monday, sources familiar with the plans tell TechCrunch. The site, which previously featured only a limited number of service offerings in a handful of select markets, has also recently expanded to include a much larger number of categories of services as well as additional cities around the U.S.

Amazon says that more locations and service providers are being added all the time, and it additionally included a map that displayed the extent of its U.S. coverage (see below).

As you may recall, Amazon Home Services quietly rolled out in late 2014 as the company’s initial foray in to providing a marketplace for services that would exist alongside its product offerings, offering the retailer another means of generating revenues outside of shipping physical products. Initially, the marketplace largely featured service providers whose businesses could help Amazon shoppers with additional needs that might follow a product purchase, however – like installers who could mount a new TV, for example.

According to The WSJ’s report back in November, for example, shoppers in New York, L.A. and Amazon’s hometown of Seattle would see offers from the Local Services site after purchasing related items through the online retailer, like a car stereo or air conditioner that needed installation, for instance. 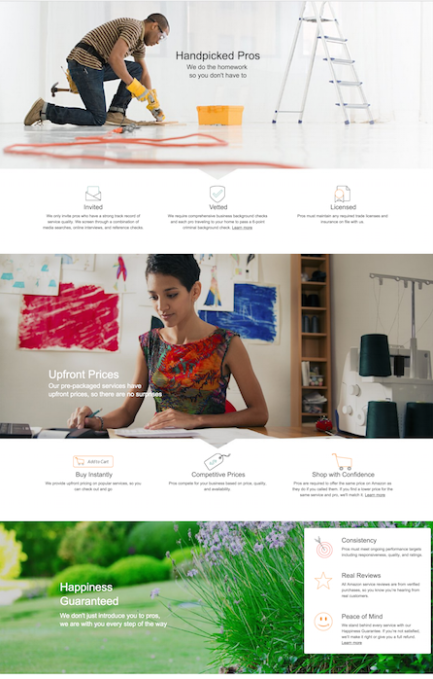 However, a promotional video released at the time explained that Amazon would eventually offer access to a wider range of professional services, including things like “plumbers, auto mechanics, and yoga instructors,” it said. This would make the marketplace more of a competitor to things like Angie’s List, Craigslist or Groupon. (Amazon had declined to comment on those earlier reports.)

Now that expanded category line up is live – or at least it will be on Monday. On the rebranded “Amazon Home Services” website there are a variety categories beyond those that only relate to products Amazon sells. Top-level categories include Home Improvement, Lawn & Garden, Automotive, Computer & Electronics, and Lessons. There’s even a “More” category for those that don’t fit into the other groupings, which includes some more interesting services like “goat grazing” or “singing performances.” The idea here is to expand the marketplace to include any services a customer may need – even everyday needs like housecleaning or babysitting.

In other words, with the official launch, Amazon is taking a big step to compete in the on-demand economy. But in our understanding, Amazon is partnering with some of these on-demand service startups, rather than trying to replace them entirely. This is a similar strategy to what Amazon has pursued with other initiatives, like its online art store or its Amazon Sellers program. Amazon could end up driving more business for some of these companies, the way it has provided additional customer flow for small retailers of physical goods.

Also of note, Amazon hand-picks the businesses it includes on its site, and required all those who were listed to be licensed, insured and background-checked. The website previously said that Amazon would take a 20 percent cut of the services that cost under $1,000, and 15 percent for those over $1,000. But recently, the language on the website was updated, noting that, as of March 27, service fees are divided into three tiers: standardized, custom and recurring, each with a 5 percent transaction fee, and then with varying “service platform” fees ranging from 15 percent (standardized) to 19 percent (custom) to 5 percent (recurring).

Amazon declined to comment on the forthcoming official debut.

For consumers, the updated marketplace offers a number of features that could make it competitive to other providers, like Angie’s List, Yelp or Google’s business listings as a place to find providers. Because Amazon shoppers buy the services by placing them in an online cart, the company can verify the purchases leading to authenticated user reviews – meaning no one can slam a business out of spite or to take down a competitor. Instead, service reviews only come from real customers.

Plus, the pros on the site offer Amazon the same pricing as if you dialed them direct, the website now claims – and if you find they offer a lower price, Amazon will match it. That change may be related to earlier complaints from consumers trying the service during its beta phase. Some found that they ended up haggling over pricing, and had trouble getting Amazon to pay up when they were given an incorrect quote.