A new app update from Ten One Design available today brings pressure sensitive input via the new Force Touch trackpad to any drawing app on your Mac. Inklet 1.6, the latest version of adds support for the pressure sensitivity features of the new Mac input hardware, which ships on the most recent 13-inch Retina MacBook Pro, as well as the upcoming all-new 12-inch MacBook.

Inklet has been around since 2010, but while it allowed you to use the trackpad of your Mac as a drawing input, it didn’t support pressure-based input unless you were using it with a Pogo pen that supports pressure sensitivity. Now, you can use any stylus, or even your finger, to control line width via the trackpad based on how hard you press.

I tried it out, and it’s very much like drawing on a smaller version of the Wacom Bamboo series of tablets, meaning you also have to get used to positioning in order to really use it well. The app provides a highlighted area mapped directly to your trackpad by default, which makes it easier to use, and provides a number of tools accessible via gestures like two-finger pinch, zoom and rotate to manipulate the active drawing area depending on your preference. 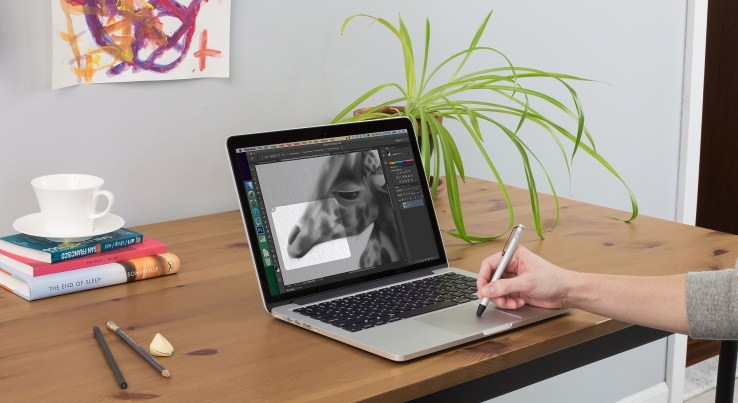 You can also tweak how it detects input (via holding down the space bar, or simply by noticing pressure), adjust sensitivity and range, and pretty much modify things to a place where you’re more comfortable. All that said, I did find the input lagged a bit when using it with the most recent version of Photoshop on the 2015 13-inch Retina MacBook Pro. The company offers a free demo, so you can see if you’re okay with the level of lag before you put down $25 to unlock the full version of the software.

It’s a very cool way to sketch on the road, however, without requiring an external tablet and while also providing the power of full Photoshop. Once I get used to the mapping, I could easily see using it for early brainstorm sketches, and even for slightly more involved graphics projects in a pinch.

Ten One has also updated their Autograph app to support pressure sensitivity via the new Force Touch trackpad to make for smoother, more ink-like signatures, and that update is also available today.