Finding good tech talent is a challenge right now. The Obama administration poured $100 million into the new TechHire initiative this last month to fill half a million open IT jobs in the U.S. for that reason. Y Combinator-backed SmartHires (not to be confused with the recruiting site SmartHire or job search site Smart Hires) tackles that challenge with the creation of a startup referral network for strong job candidates.

The idea behind SmartHires is that it’s better to keep talent within investor portfolio networks. “Many startups end up rejecting great candidates but it’s better if they stay in the family,” SmartHires co-founder Stephan Kletzl told TechCrunch.

Kletzl and his co-founder and identical twin brother Christian Kletzl started SmartHires, along with David Pichsenmeister, after seeing how difficult it was to find top talent. “Smart people are getting passed on and added to the rejection list when there might be someone within the hiring manager’s network that needs them,” Stephan said.

The brothers envision keeping the most talented candidates within certain investor portfolios, thus adding to a stronger pool of candidates for the startups those investors have funded. 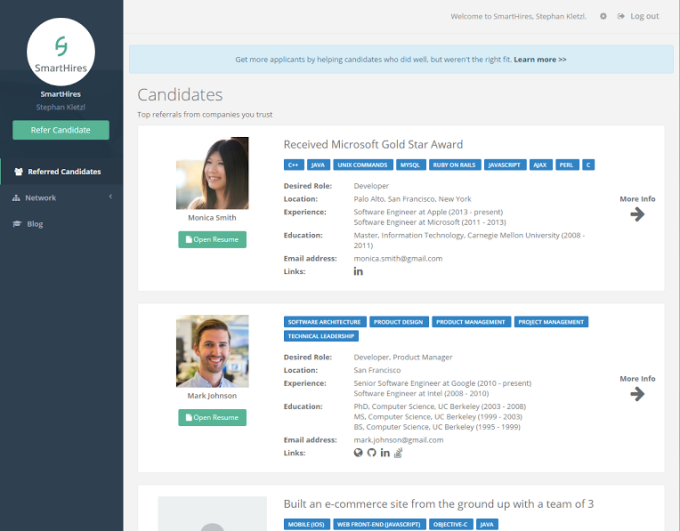 It works like this: hiring managers at startups within YC, SV Angel or some other portfolio family see a great applicant that doesn’t exactly fit with what they are hiring for. Rather than just adding the person’s resume to a stack of rejections, the hiring manager can add them to that portfolio network of startups. Other startups within that network can see that a certain startup within the network has vouched for that candidate.

There are a lot of startups within Silicon Valley working on similar ideas, some even within the YC network. HigherMe, another YC portfolio company this batch, focuses on finding good retail employees. Hired is a Silicon Valley-based startup that hooks candidates up with tech companies. SmartHires is unique to these other recruitment companies in that it works on network referrals instead of just a resume.

The way SmartHires makes money resembles the Hired model. Like Hired, if a candidate takes the job within the portfolio network, SmartHires takes a 2 percent cut of the annual salary offered to that candidate.

The person referring the candidate doesn’t get paid for it, but they do get earlier access to candidates on the list if they refer top talent. “He’ll more likely get friends of the rejected candidate to apply at his startup and he’ll make the rejection email easier on him and the candidate,” Stephan added.

The SmartHires platform is mainly working within the YC network at the moment. At least 70 percent of those candidates applying within the YC network got interview requests with YC-backed companies, according to Stephan. Startups like Zenefits and Weebly have already hired candidates or are in the final stages of interviews from someone referred to them through SmartHires.

YC demo day is coming up and the Kletzl brothers are mainly focused on that for now, but they said the next steps would involve building out to more investor portfolio networks.